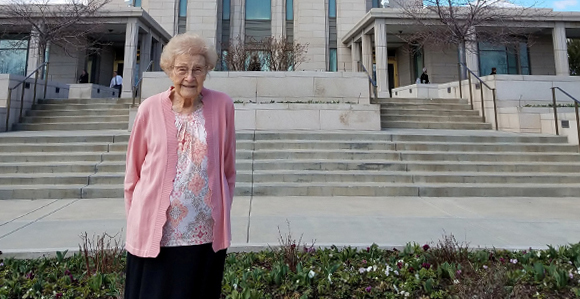 To her friends and family, Anne Freiss is considered "100-years-young" and an inspiration in the ways she continues to serve the Lord.

Anne Freiss doesn't like anyone knowing or making a fuss about her age. She doesn’t like being the center of attention. And up until her recent release, she was the oldest temple ordinance worker serving in the Oquirrh Mountain Utah Temple.

Before moving to Utah, Sister Freiss lived in Arizona. She retired from her full-time job at age 83 and spent the next 10 years serving in the Mesa Arizona Temple. In 2012 she moved to Salt Lake, where she began her service as a 94-year-old ordinance worker in the Oquirrh Mountain Utah Temple.

She continued serving in the temple every week. Most weeks she drove herself, since she does not like to put anyone out. She was even still able to use the stairs.

“You don’t need to schedule a break for me,” Sister Freiss told her coordinator at the temple, Sister Debra L. Martin. The sisters who serve with Sister Freiss in the temple say she is a blessing to all around her.