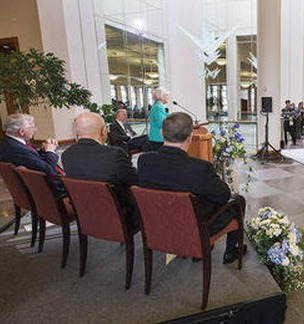 Following is a timeline of statements and actions from The Church of Jesus Christ of Latter-day Saints regarding religious freedom and nondiscrimination:

1835: A general assembly of the Church held in Kirtland, Ohio, on Aug. 17 unanimously adopts a declaration of belief regarding governments and laws: “We believe that religion is instituted of God; and that men are amenable to him, and to him only, for the exercise of it, unless their religious opinions prompt them to infringe upon the rights and liberties of others."

1841: The City Council of Nauvoo passes an ordinance stating that “Catholics, Presbyterians, Methodists, Baptists, Latter-day Saints, Quakers, Episcopals, Universalists, Unitarians, Mohammedans, and all other religious sects and denominations whatever, shall have free toleration, and equal privileges, in this city.”

1842: The Prophet Joseph Smith wrote a letter to John Wentworth, a newspaper editor, giving information about the Church. Part of that letter became the Church’s 11th Article of Faith: “We claim the privilege of worshiping Almighty God according to the dictates of our own conscience, and allow all men the same privilege, let them worship how, where, or what they may.”