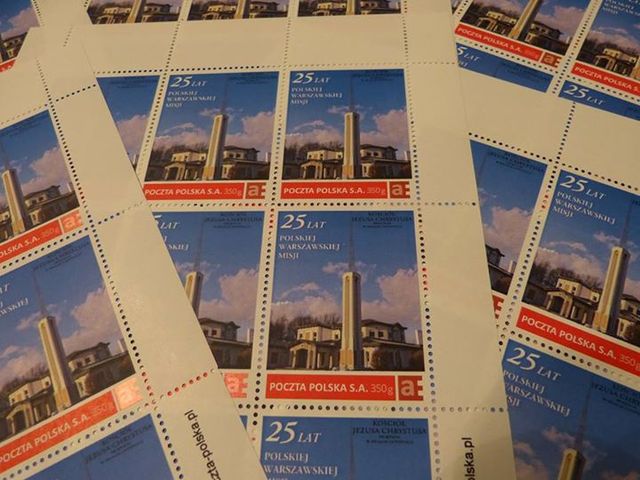 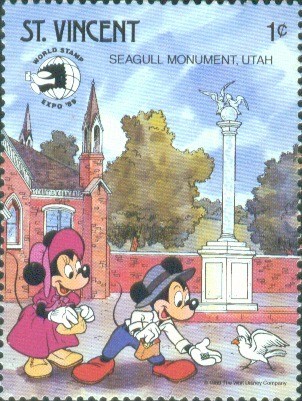 Photo from Colnect. From Church News: "Saint Vincent issued an eight-stamp Walt Disney series featuring well-known landmarks in the United States such as Mount Vernon, Lincoln Memorial, and the Crazy Horse Memorial. Among the stamps in this series was one featuring Mickey and Minnie Mouse feeding a seagull on Temple Square." 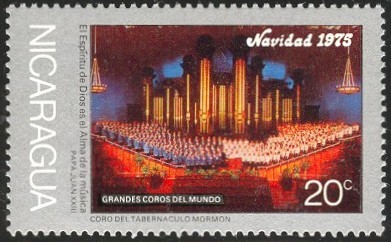 From Pipe Organ Stamps: Nicaragua issued a set of 11 stamps in 1975 featuring famous choirs from around the world. One of these is the Tabernacle Choir on Temple Square. 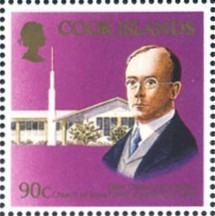 From the Ensign: "[This stamp] is part of a four-stamp set, each stamp recognizing a religion in the Cook Islands—Roman Catholic, Anglican, Seventh-Day Adventist, and The Church of Jesus Christ of Latter-day Saints. The stamps each depict a person and a church building representative of that religion. The [Latter-day Saint] stamp shows Elder Osborne J. P. Widtsoe (his name, unfortunately, is misspelled), the first [Latter-day Saint] missionary to the Cook Islands, along with a typical modern meetinghouse."