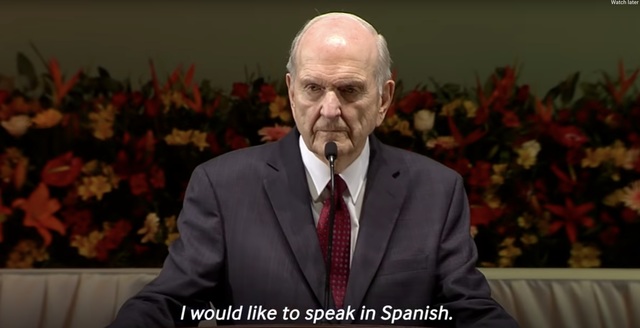 President Russell M. Nelson is currently touring South America speaking to saints in Peru, Bolivia, Paraguay, Uruguay, and Chile. As our prophet has traveled the world this year, we have seen how much he cares for God’s children and for the gospel of Jesus Christ. President Nelson has also been able to address the Latter-day Saints in South America in Spanish, which has been a huge blessing for them.

Newsroom reported that as President Nelson began speaking to the Saints in Peru, “he announced to the delight and applause of the audience that he would speak in Spanish, which he did for more than 15 minutes.”

We’ve all heard Elder Uchtdorf’s German accent during his general conference talks, but we don’t often hear him speak in his native language. Last year, he shared a TV interview from 30 years ago when he was serving as a stake president, the chief pilot of Lufthansa, and the chair of the temple committee for the Frankfurt, Germany temple. He and the interviewer conversed in German and discussed gospel topics that Elder Uchdorf says are still “very timely today.”

One missionary recalled when Elder Uchtdorf visited his mission and addressed the Saints there in German. He noticed that Elder Uchtdorf used more elaborate language when speaking in English, but when he spoke in German that day, “It wasn’t so much that he was leading the charge as he was standing by our side and helping us as individuals see our true potential. . . . It really changed things for the better.”

Elder Ulisses Soares and President M. Russell Ballard visited Brazilian members in August of this year. It was Elder Soares’ first time back to his home country since being called as an apostle, and he spoke to the missionaries in Portuguese. One of the 800 missionaries in attendance said, “It was so inspiring to listen to an Apostle speaking in Portuguese. I felt the Spirit, and he answered questions that I had.”

Since being called as an apostle, Elder Soares has been active on social media. He adds a unique touch to his Instagram posts, typing out the caption twice: once in English and once in Portuguese. This helps many Portuguese-speaking members read Elder Soares’ testimony without losing any of his powerful words in translation.

Edler Renlund grew up speaking Swedish in his home and was called to serve a mission in Sweden. When he returned to Europe as an apostle, Europe Area President Elder Paul V. Johnson suggested he visit Sweden to address the members in their native language.

Elder Johnson said, “Elder and Sister Renlund’s visit to Sweden was historic. This is the first time a Swedish-speaking Apostle has been to Sweden and spoken in Swedish. In fact, one person told me that many were very impressed with his ‘magnificent Swedish.’”

Elder Stevenson traveled to Japan in August to address the youth and answer their questions in a Face to Face event. He learned the language as a missionary and said, “I felt it a great privilege to be able to testify of Jesus Christ and of His role as our Savior and Redeemer in Japanese to our Japanese Saints. . . . They’re the treasure of Japan.”

It was made clear that Elder and Sister Stevenson have a love for the youth in Japan. While talking about speaking Japanese at the event, Elder Stevenson said, “It’s the language of their heart, and it’s kind of become the language of my heart as well.”

Elder Andersen accompanied President Nelson on a visit to Canada in August. Elder Andersen served a mission in France and is fluent in the language. He greeted the Canadian saints in French and spoke of the importance of following Jesus Christ.

Elder Andersen spoke French while on a ministry tour to the Pacific Islands. While there, he talked with Saints, met with the president of French Polynesia, and testified of Jesus Christ and His love for His children.

9. Some apostles have translated their own talks

Elder Richard G. Scott was known for recording his general conference talks in advance in Spanish and Portuguese. Because of his knowledge of the two languages, he could speak to 86 percent of all active members of the Church in their native language.

Elder D. Todd Christoffersen followed Elder Scott’s example in the October 2015 general conference by providing his own Spanish translation for his talk.

After teaching the saints about faith and hope, he bore his testimony in their native language: Russian.

President Nelson is touring South America and visiting the faithful saints in Peru, Bolivia, Paraguay, Uruguay, and Chile. While he was in Peru, he decided to address the members in Spanish.

Newsroom reported, “In fluent Spanish, he spoke of the importance of keeping the commandments, of the blessings of temple marriage and of the Atonement of Christ as the foundation of the Church.”

President Russell M. Nelson began his five-country South America ministry tour with a visit to Lima, Peru, Saturday, October 20, 2018. 🇵🇪 • Thousands of Peruvian Latter-day Saints greeted President Nelson and his wife, Wendy, along with Elder Gary E. Stevenson of the Quorum of the Twelve Apostles and his wife, Lesa, at an afternoon meeting for missionaries and an evening devotional. • More in the link found in our profile.

President Nelson decided to learn Chinese when President Spencer W. Kimball said in a seminar, “We should be of service to the Chinese. We should learn their language. We should pray for them and help them.” In a Worldwide Youth Devotional, President Nelson recalled the experience saying, “I did not hear him say, ‘Everyone except Brother Nelson!’”

He and his wife immediately started studying the difficult language and praying for the people in China. Six weeks later, President Nelson was attending the annual meeting of the American Association for Thoracic Surgery. He mentioned that he was typically supposed to sit at the front of the room, but he “became increasingly uncomfortable” sitting in his chair.

“As the lights were turned down for a slide presentation, I slipped out of my chair and walked quietly to the back of the room.” When the lights turned on, he realized he was sitting by Professor Wu Ying-Kai, a doctor from Beijing, China.

They started talking in Mandarin and developed a relationship. Dr. Wu visited the University of Utah and President Nelson visited China. While there, President Nelson became friends with Dr. Zhang Zheng-Xiang, who later asked him to perform a complex surgery on a famous opera singer. It was the last surgery he ever performed and it created “much goodwill,” according to lds.org.  The article continues, “In 2015, President Nelson was named an ‘old friend of China’ for his work to introduce open-heart surgery to the country.”

Incredible things happened as a result of President Nelson deciding to follow the prophet. He said, “It is my testimony that when we follow through with whatever the prophet of God asks us to do, the way will be opened and lives will be changed.”