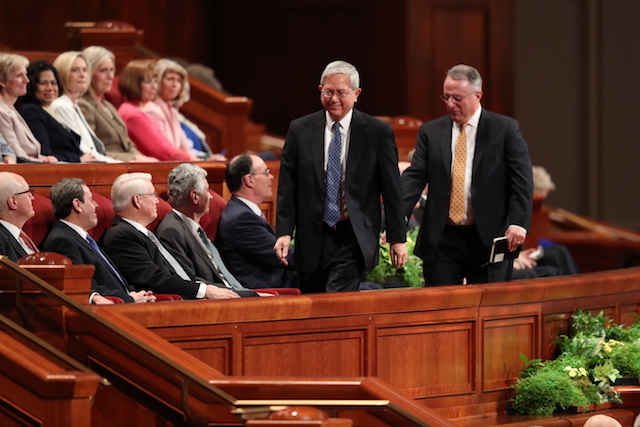 Elder Gerrit W. Gong and Elder Ulisses Soares made history during the April general conference by being called as the first Asian-American apostle and the first Latin American apostle respectively. As members of the Church prepare to hear from the newest members of The Quorum of the Twelve Apostles, we thought we would share with you a few things we’ve learned about Elder Gong and Elder Soares since last conference.

1. Elder Gong has a Dutch first name, an American middle name (Walter after his father) and a Chinese last name.

His first namesake is Gerrit de Jong, the patriarch of the family that Elder Gong’s mother, Jean, lived with when she came to Brigham Young University as a recent convert to the Church. Gerrit de Jong was the first dean of the BYU College of Fine Arts and an accomplished composer and linguist from Amsterdam.

After receiving her bachelor’s degree, Jean moved to Palo Alto, California, to attend Stanford University, and it was there that she met her future husband, Elder Gong’s father, Walter, who also converted to the gospel. Despite no blood relation, Elder Gong’s family call Gerrit de Jong and his wife “Grandpa and Grandma.”

2. Elder Gong’s parents were married three times—to each other.

As Elder Gong explained in his October 2010 general conference talk, “there was a Chinese ceremony for family, an American ceremony for friends and a sacred ceremony in the house of the Lord for time and eternity.”

3. He has extensive political experience.

In the mid-‘80s, Elder Gong worked for the U.S. government as special assistant to the Undersecretary of State at the State Department and special assistant to the U.S. ambassador in Beijing, China. He has testified before Congress on a range of East Asia issues. From 1989 to 2001, Elder Gong worked at the Center for Strategic and International Studies in Washington, D.C.

While his high school basketball coach discouraged Elder Gong from pursuing his hoop dreams due to his smaller frame, Elder Gong played soccer in high school and also tried out for the crew team at Oxford.

5. Despite his international political involvement, he has quipped that he earned a degree in international relations during his transcontinental courtship with his wife, Susan Lindsay Gong.

The couple met in the Missionary Training Center as then-Sister Lindsay prepared to serve as a missionary in Taiwan. Elder Gong was not a missionary but a BYU student presenting a fireside to missionaries about Taiwanese culture. His wife, Susan, is the daughter of Richard P. Lindsay, who was a member of the Second Quorum of the Seventy. They did not begin dating until a few years later when Elder Gong was home for a few weeks from Oxford where he was a Rhodes Scholar. With Elder Gong in England and the future-Sister Gong at BYU, the two learned a few things about long distance relationships.

In fact, according to an article written by Elder D. Todd Christofferson in the October 2018 Ensign about Elder Gong, the couple got engaged over the phone. Together, they have continued their international education as they have traveled with their four sons to many places around the world, including one trip that included the Czech Republic, Greece, Turkey, India, China, and Japan.

She has also authored Chinese children’s books, completed an MA at BYU in creative writing, and taught Chinese classes at both BYU and Provo High.

1. Elder Soares also met his wife, Rosana Fernandez Soares, when she was a missionary.

The only difference was that he was also a missionary at the time. The two served in the Brazil Rio de Janeiro Mission and he was her zone leader, but they began dating after running into each other at a stake dance in São Paulo once they were both home.

2. He had begun saving for his mission after his bishop invited him to fill out mission papers when he was 11.

He earned all of the money for his mission by working for a company preparing its payroll and eventually working in its accounting department.

“Each month during the three years before I left, I would buy something I needed—a shirt, a pair of pants, a pair of socks, a tie, a suitcase,” Elder Soares said in an October 2018 Ensign article penned by Elder Neil L. Andersen. The article also recounts how Elder Soares was able to meet his family at the São Paulo Temple during his time as a missionary to be sealed for time and eternity.

3. Together with his wife, he served another mission, this time as mission president and companion in the Portugal Porto Mission.

They were called just six weeks before they were to leave and were miraculously able to obtain their visas.

4. He has a special appreciation for converts to the Church.

Like Elder Gong, Elder Soares is also the son of two converts of the Church and has frequently expressed gratitude for his parents’ decision to be baptized when he was 6 years old. His wife, Rosana, is also a convert to the Church and had begun investigating with her sister, Margareth. Margareth is also married to a general authority: Elder Claudio R. M. Costa.

5. He studied accounting and economics at a respected university in São Paulo, Brazil.

He would go on to receive an MBA and worked as an accountant and auditor for multinational corporations in Brazil before becoming one of the Church’s youngest directors of temporal affairs at age 31.

6. In addition to Portuguese and English, Elder Soares also speaks Spanish and French. He was one of the few people to give a general conference talk in his native language in the April 2015 conference.

In June, Elders Gong and Soares spoke with media about their first few months as apostles. Both took the opportunity to speak highly of the other.

“Elder Soares is a man of great experience and great compassion. He is loved wherever he goes, and that’s in part because he loves people wherever he goes,” Elder Gong said. “Wherever they are in the world, the people understand that he represents the Lord Jesus Christ.”

“What really affects me is his wisdom,” Elder Soares said of Elder Gong. “And his worldwide experience that brings a lot of background, a lot of wisdom in the way he expresses himself. He’s always right in what he says.”