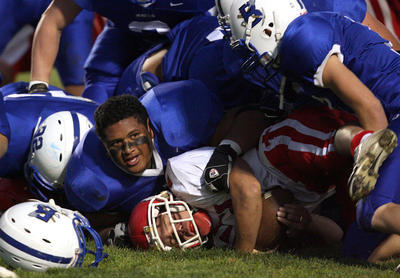 This is a list of 121 football players in the Football Bowl Subdivision who have also served full-time missions for The Church of Jesus Christ of Latter-day Saints at various locations around the globe. The list includes 58 players at BYU, 21 at Utah State and 21 at the University of Utah.

There are three each at Oregon State, Arizona State and Hawaii, along with two each at UNLV, Oregon, Stanford and the University of Arizona. The University of California-Berkeley, Boise State, Air Force and San Jose State each have one.

If you know of a returned missionary college football player we have missed, please send an email to ttoone@deseretnews.com with the name of the player, his team and where he served his mission.

Tame Fangupo (Without a helmet)