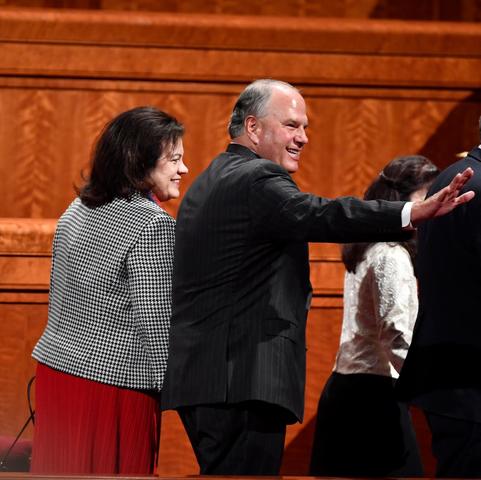 13 Remarkable Responses to Elder Rasband's Question: How Has God Guided You?

Editor's note: These responses have been edited for length and clarity.

After a general conference filled with uplifting, inspired messages, Elder Ronald A. Rasband poised a question to Church members everywhere.

"How has He [Heavenly Father] guided you to be where you are today?"

The question came from Elder Rasband's Facebook post, which said Heavenly Father has a "distinct plan" for everyone, sharing examples from his own life of how he knew that was true.

"The Lord helped me find my lovely wife, Melanie; He prompted a businessman, who became a dear friend, to give me an employment opportunity. The Lord called me to serve in the mission field, both as a young man and as a mission president; He called me to the Quorum of the Seventy; and now He has called me as an Apostle. Looking back, I realize I did not orchestrate those moves; the Lord did, just as He is orchestrating important moves for you and for those you love," he wrote.

After reading Elder Rasband's post, more than 330 people responded within a week.

Here are just a few of their touching responses:

"Recently we felt prompted to move into a specific ward in another state and I was recently diagnosed with a difficult cancer. Our ward has been wonderful supporting us, my wife is with me every step of the way and the Lord is blessing and guiding us. We have an inspired doctor treating me. It has been a difficult trial but we have been so blessed because we followed a prompting to move. The last scan showed that my tumor near my brain has already shrunk by 50 percent and my doctors think I am on the road to recovery. The Lord has made our burdens light. We believe he is preparing us to serve others with compassion. Thank you Elder Rasband for reminding us that there are no coincidences with the Lord."

"My Husband and I cannot have children. We prayed for the opportunity to be parents but every time we were told to 'be still.' And so we waited. Then, from the unlikeliest source, and opportunity came to adopt a baby. Nothing about it should have worked. Any logical person, including me at times, would have told us we were fools. And yet the Lord told us to proceed. Even after he was born it seemed impossible that he would be ours. And yet through many small miracles we have a beautiful son, a child who is only ours because of how the Lord orchestrated the details of our lives. I know He knows each of us and His hand is in the details of our lives."

"The Lord preserved my life from the time I was very young. When I was 15 years old, the Lord led my family to a home next to an LDS stake center in northern California. He allowed me to see a TV show about religions, including this one. He put a member of the church in my path the next day and revealed to me that my Algebra teacher was a member of the church. I approached him and he put me in contact with the missionaries. The Lord has continued to guide, surprise, and bless me ever since."

"Within the last year we were blessed in a way we could never have orchestrated on our own. My husband and I are in our mid to late 70s. We have raised a daughter with autism, bipolar disorder, OCD, and cognitive limitations. There have been many times we didn't know where to turn and miracles have happened. Last fall I found myself in the car crying and praying because much as I love her, I was falling apart emotionally and physically with the strain. I was instructed to investigate finding a supported apartment for her. Things fell into place in a way that amazed her support coordinator. The timing was perfect for an opening in the most wonderful setting. They even take her to church and sing primary songs with her. She is thriving!"

"In my youth, I struggled in school and did not have much hope in being able to provide well for myself or a future family. I went on a mission and later started a job putting away stock at a family friend's business. I met my future wife, date her for six months, and then waited for her while she served a mission. When she returned, we married. I continued working for our friends business and tried to be the best at anything they asked of me. When children came, my wife and I elected to have her stay at home to raise our children earning $6.50 an hour. I don’t know how we did it. We stayed faithful in the gospel and that company and worked hard. Twenty-nine years later with five children, we are still actively pursuing to exercise better faith in our lives. I still work in the same industry as a director of operations for my company. A position I love but never believed I was capable of doing. Many years of striving to be obedient in the gospel carried over to my work and paved the path that allowed God to pour out more blessings in my life than I could ever imagine. I am truly grateful for Gods love for each of us."

"Forty-three years ago, a high school friend invited me to participate in a church dance festival. The decision to accept her invitation led me to join the Church. In hindsight, I've realized that her invitation was the Lord's way of leading me to finding the fullness of the gospel. Without that invitation, I doubt I would have found the Church, and without the Church my life would be vastly different."

"After I received an advanced degree from an excellent foreign university, I expected and desired to work overseas for the rest of my life. I had many interviews but never found that kind of job, so I just lived in my home city. Ten years later, my mother died of pancreatic cancer. The Lord blessed me to have those years close to my mother. If I would have known all the facts, I would have chosen for myself what he provided to me."

"I quit living by coincidence a long time ago and try to recognize the hand of the Lord in just about every remarkable situation. I had one such some years ago when I lost my ID and had to go through the Denver airport. Good luck, right? I sent my wife ahead and told her that I might miss the plane. Then, I offered a silent prayer and selected a TSA inspection point at 'random' to see if I could be permitted go forward. I explained, and we went through my wallet together, stopping at his question. 'Is that a current temple recommend?' It was. He walked me back and spoke on the phone to the supervisor who told him that if he trusted me, he could make the decision. I got through and joined my wife on the plane flight home. Grateful for the 'coincidence.'"

"In 2003, I was in an accident that I shouldn’t have survived. Yet I walked away without injury. Since that time, I realized I need to 'let go'" of the past hurts, resentments, and anger towards family and the Church. Yes, I’ve done it. I even left the Church and now I’m back. The jobs I have had and the one now, the people I’ve met along the way, those that helped without knowing. Every day I’m grateful for the Lord to answer my prayers after my grandmother passed. The Lord has been there. Even teaching me right before I came back to being active, giving me some experience that I could than think about and turn that lesson into a spiritual lesson."

"Years ago, my wife and I felt impressed to put our home for sale. Six months later, not a single person had even put an offer on it! So we took it off the market. A few months later, our realtor called and said he had a buyer who was asking about our specific house. They came and saw it and made a good offer, so we accepted. I called my boss to let him know that our home would be sold in a month, and that if he needed us living anywhere specific, to let us know. He called later that night and told us that an employee in a distant city had passed away the previous day, and they’d like to send a replacement within a month; were we interested in possibly taking the position? Needless to say, the move has blessed our family’s life, and has served as a reminder that the Lord’s timing is impeccable."

"I'm a senior missionary sister in the England Birmingham Mission. I was divorced 4 years ago after 30 years of marriage. As I listened to your talk today, I couldn't help but feel the spirit of truth in it. So much so that it leaked out of my eyes!! I can look back and see the Lord in EVERY detail of my life. I didn't see it at the time but all things have culminated to bring me where I am today. Thank you for your words, they spoke to my heart!"

"After an extremely difficult semester at school, I came home for the summer, thinking I would change my major and feeling ever distant from my Heavenly Father. I had planned on working full-time all summer and setting my life on a new trajectory. The first week home I found out I needed reconstructive foot surgery, so two weeks after the semester was over, I was sitting for two months, reconsidering my life. With that 'time out,' it reconnected to me what was most important in life and helped me decide to stick with my major. I’m so glad God gives us trials that help us continue on the individual path that He has planned for us."

"My family and I are in a 'back to square one' position this very moment, and I have tears running down my face as I grieve the loss of, what we thought, was a terrific plan for our near future. I have no idea what the Lord has in store for us, or why we have to give up this dream we have spent the last several years building together, at least, for now. But I have faith that we will look back at this moment, at some future date, and it will all make sense. As clear as my limited vision is while taking risks and dreaming big and trying to be a disciple of Christ, I know there are things that I can't see, and right now my job is to really try to get past the default anger and disappointment, and simply have faith, and hold on to the knowledge that the Lord knows me, my family, and the desires of our hearts, and He will compensate us for every loss, even the loss of a dream. Thank you for your encouraging and inspiring words, Elder Rasband, and to all of you on this thread for your testimonies."