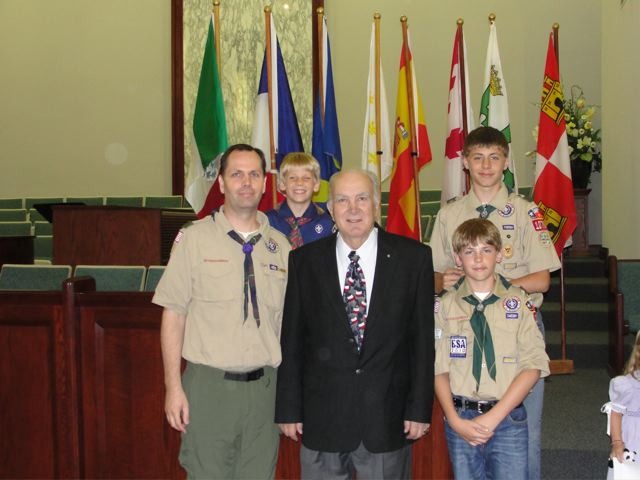 148 Boy Scouts earn badges thanks to one Scout leader

It’s not every day that someone takes on a challenge to help 148 kids earn their Scout badges and learn some history while at it.

Mark Allen, scoutmaster for troop 1078 in Katy, Texas, was training to get his Woodbadge—the pinnacle of training for adult Scout leaders. As part of his training, Allen had to write a ticket—a list of things he committed to doing to benefit his troop, district and Scout council.

Allen said that as he thought about his ticket, two very important, yet not well-known, badges came to mind. He then set a goal of working with 100 Scouts in the Sam Houston area council to help them earn these badges.

These two badges, the Texas Boy Scout award and the Texas Cub Scout badge, have a great importance in the state because they define the history of Texas and teach the kids about gratitude for what they have been given, while making their world a better place to live.

Allen decided that because it was the 100th anniversary of the Boy Scouts of America, he would take 100 boys and help them earn these awards.

Allen said the community was very supportive and really rallied around the opportunity. “It was a very unique opportunity,” Allen said. “Most of the kids were not LDS, so it was a tremendous community outreach.”

As Allen started his preparations, he learned that Sam Houston IV, great-great-grandson of the famous Sam Houston—the first president of the Republic of Texas—lived in the area. Allen wrote him a letter inviting him to be part of the program he was putting together. Houston was happy to help.

“One value of Scouting is working together,” Allen said of helping the boys, regardless of their religion. “In Scouting there are various flavors of Christianity so that wasn’t even an issue. We are in the South where there’s a general acceptance of religion, so I would say, even though only 25 percent were LDS, it was never really an issue, never . . . . Whether they are LDS, Jewish or Catholic, it doesn’t matter.”

Not everyone in the country thinks the same, however, and as he remembered the incident in North Carolina where LDS parents were rejected as Cub Scout leaders because of their religion.

Allen also expanded on the fact that a lot of people think that because LDS Scout troops do things differently, it is hard to get along. However, he explained that the majority just get along and celebrate those differences.

In the end, 148 lives were changed for the better and now he plans to do the same with the environmental merit badges while reaching out to the community—LDS and non-LDS alike.