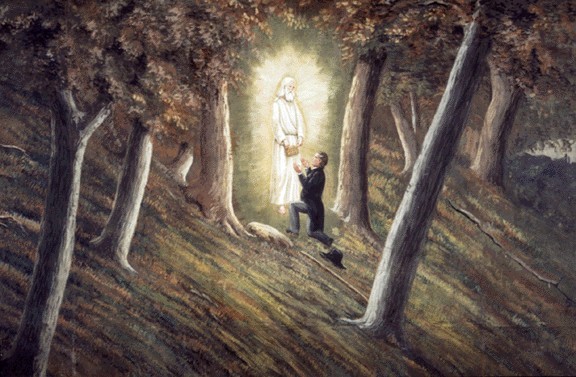 Did you know Joseph Smith's famous leg surgery was the fourth in a series of surgeries? As we celebrate Joseph Smith's birthday, here's a list of 15 other interesting facts about Joseph Smith.

1. Joseph Smith’s famous leg surgery was actually the fourth in a series of surgeries. The first surgery doctors had to lance his shoulder to drain it of infected material, the second and third times they tried to drain his leg, and the fourth time they removed the bone.

2. Emma wouldn’t let Joseph into the garden because people would gather just to be around him and would trample the plants.

3. The Prophet once taught that “complainers cannot be exalted.”

4. During the translation of the Book of Mormon, Joseph and Oliver Cowdery translated about 12 pages a day.

5. Joseph Smith was often known for his sense of humor. One of the phrases Heber C. Kimball recalled him using to get people to work on something was to “Yankee doodle do it.”

6. Once, while Joseph was supposed to be in hiding, he was actually playing in the street, flying a kite with the other boys. A man came up and asked one of the boys, Charles Stoddard, where the Prophet Joseph Smith was. Charles said, “He went to heaven on Hyrum’s white horse and we are fixing this kite to send his dinner to him.”

8. During the Ohio tarring and feathering, Joseph spoke of how his spirit left his body during the ordeal and then returned after it was over.

9. More revelations were received by Joseph Smith in an upper room of the Newel K. Whitney store than any other building or room.

10. Joseph beat Justice A. Morse (the strongest man in Ramus) at the stick pull with one hand.

11. The Prophet owned two dogs: one named Major and a bulldog named Baker.

12. The tricky leg surgery performed on 7-year-old Joseph would not be successfully repeated until nearly a century later.

13. An assassin attempted to kill Joseph when he was 14. The shot was fired at the Prophet in a gray twilight, missing its target and hitting a nearby cow instead.

14. In 1826, the angel Moroni told Joseph that he could obtain the plates the following year if he brought “the right person” to the hill and that, when the time came, he would know who that person would be. The following year, Emma Hale accompanied Joseph to the Hill Cumorah to retrieve the plates.

15. On July 27, 1837, in Kirtland, Ohio, Joseph Smith was arrested—and released—six times that day on false charges.

For more facts on the Prophet's life, check out 500 Little-Known Facts about Joseph Smith.