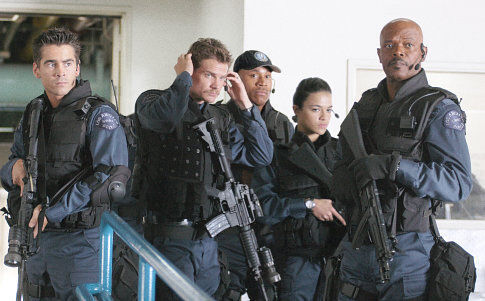 Samuel L. Jackson, Colin Farrell, and LL Cool J taking on a host of hired men trying to break a drug kingpin out of prison. Just your typical perfect moment to learn a little bit about the Word of Wisdom.

While they might not have characterized LDS beliefs about drinking caffeine and eating fast food entirely accurately, here are a few funny Mormon mentions from this movie:

► You'll also like: Caffeine: What the Prophets Have Actually Said

Street (Colin Farrell): "You're a little too attached to that soda, Gus."

Gus (James DuMont): "Love that stuff! The wife would have my behind if she busted me suckin' that down."

Gus: "You know the deal, Jim. When we got married I converted to Mormonism. We can't consume anything that alters our state of mind. We treat our bodies with respect."

Street: "And I treat mine like an amusement park. It's the differences that make this country great."

Later, when Gus is eating McDonald's:

Street: "Isn't that eternal damnation you're chowing down there?"

Street: "Isn't she gonna smell the fries on your breath?"

Street: "Gus, you're cheating on your wife with fast food."

Gus: "You're right! You're absolutely right." [Pushes the food away.]