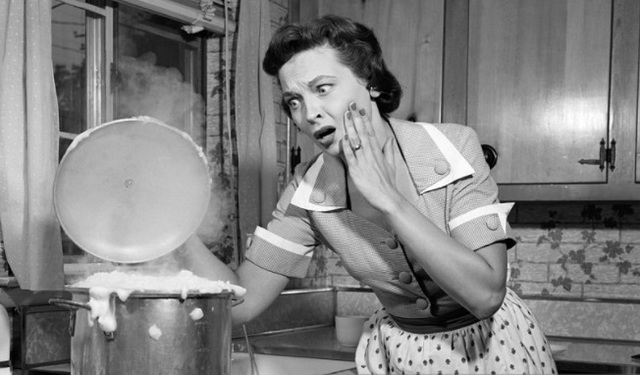 The following comments from LDS Living Facebook pages have been edited for length and clarity.

Potlucks, modern-day feasts where everyone brings their favorite food and best dishes to the dinner table. From decadent chocolate brownies to savory meats, everyone has their favorite staple that never fails to please a crowd.

Except, of course, when it does.

Here are 15 hilariously epic potluck fails that many of us can relate to.

1. Chili—it was the worst ever. It was so runny hardly anybody ate any.

I stayed late to help clean up and walked home, which was just across the street. It was dark. I tripped in a pot hole I couldn't see. I fell and my face went into chili. When I got home, my husband had locked me out. After I knocked to get in, I stood waiting patiently with bloody knees and runny chili coming out of every crevice of my head and hair. I'm sure I looked like Swamp Thing. can't even explain the look on the husband's face when he opened the door. He didn't even dare ask what happened. I just walked by, straight to the bathroom, chili bowl and all.

2. Showed up for a potluck and found out I just showed up to somebody's family reunion.

3. YSA ward choir potluck: "bring what ever you want to share for dinner"? Everybody brought corn and brownies soooo that's what we ate, ha ha ha!

4. One of my sisters-in-law took some beans to a potluck many years ago. She chose an old, cool-looking, porcelain-coated "kettle" to take them in. She found out after she got there that it was an antique "thunder mug." A.K.A., indoor potty so residents didn't have to go out to use the outhouse in the middle of the night.

5. Homemade yogurt with artfully placed fruit. By the time I showed up at church, it was just a mess.

6. I remember a time a YSA Bishop had us do a potluck in the middle of summer. I arrived with friends and the food smelled delicious. Unfortunately, the Bishop brought his dog, who went berserk for unknown reasons and knocked over the table with all the food on it. The drinks were the only thing to survive.

7. We had a R.S. activity where we all brought homemade soup. I thought I had secured my crockpot in the van. My car was cut off so I had to do a hard break and my cheesy chicken chowder was all over the van. Thankfully, my husband met me at church to swap vehicles and kids and cleaned it up for me. The van smelled wonderful.

8. I signed up to bring a dessert to one activity and cheesy potatoes to another in the same week. I mixed up the activities and didn't realize it until I was placing my cheesy potatoes on a table full of brownies, cookies, and cakes. I knew my options were either to leave then and pretend they weren't mine or own it by explaining via the microphone. I wanted to choose option one, but I ended up choosing option two and laughing about it with everyone who had a side of cheesy potatoes with their cookies.

9. We had a potluck at our house and told everyone to bring a salad/side dish. We provided meat and buns. All we had to eat was meat and buns. It wasn't a great dinner! 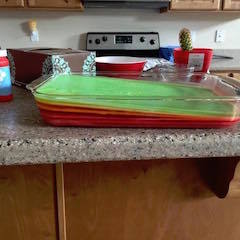 11. I was making clam chowder and instead of putting cornstarch in to thicken it, I accidentally put in baking soda!!!

12. Someone brought a tray of spam. All different types of spam.

13. Tried making five lbs. of rice for a R.S. potluck all in one large pot. Yep! It clumped together!

14. At church, I made two pumpkin pies. I forgot the sugar. Ugh. I never did that before or after, only that one time. Nobody said anything, but I did. . .

15. An elderly sister in our ward stole my plate during the closing prayer. She took the few slices of bread off the plate, then placed the plate in her lap, and wheeled off with it in her wheelchair. I LOVED that plate, but my husband wouldn't let me go after her!!! Now it's the story that gets told all the time.