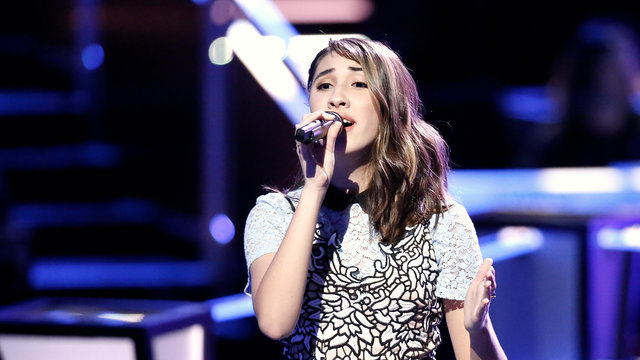 On last night's premiere of the knockout rounds on The Voice, LDS 15-year-old Hanna Eyre wowed the judges during her performance of "Bleeding Love" by Leona Lewis.

Only the best of the best make it to the knockouts, and, having come so far, Hanna says she's had some opportunities of sharing her faith with others on the show.

For example, Hanna says she tells those who are in charge of her wardrobe her modesty standards so that they know what she will and will not wear.

"Secondly, I always wear my Young Women medallion," Hanna says. "And I have been able to talk about my beliefs to quite a few contestants who have asked why I wear the necklace all the time and what the 'castle' was. It was so easy to start talking about the temple and what we do there, what I believe, and why I wear it as a constant reminder of who I am and what I stand for."

Though she's only 15 years old, Hanna has made an impression on her fellow contestants with the way she shares her standards and her talent, sometimes even shocking contestants and judges with her incredible voice.

"When I heard her sing, I was taken back," Hanna's fellow knockout contestant Autumn Turner says on the show after practicing with Hanna for their knockout round.

Show judge Blake Shelton even called Hanna a "transformer," complimenting her great control of voice and her incredible range at such a young age.

Levine also praised Hanna for her performance, noting, "It's miraculous when a 15-year-old gets up there and does that."

In the end, Adam Levine chose Hanna as the winner of her knockout round, advancing Hanna to the next stage of the competition.

"My decision is based upon what I can't live without," Levine says.

To continue to follow Hanna's story, watch NBC's The Voice.

Mormon Life Lds The VoiceLds,The Voice,Mormon Life
Comments and feedback can be sent to feedback@ldsliving.com