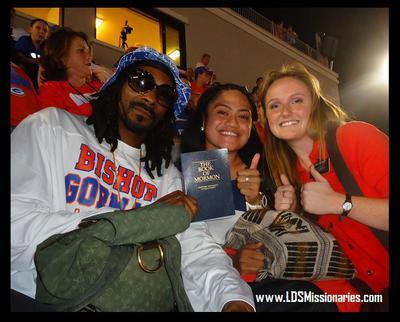 It may no longer be 2012 and the "Mormon Moment" of three years ago spearheaded by former Massachusetts governor Mitt Romney and his presidential campaign has faded away, but as last year and so far in 2015 has demonstrated, Mormons are still having quite a moment in pop culture.

With research from LDS.net and Deseret News, here are 16 Mormon pop culture moments from 2014 and so far from 2015.

The winner for the coolest Mormon moment of 2014 clearly goes to a photo posted on the LDS Missionaries Facebook page back in September of a pair of sister missionaries, Sisters Andelin and 'Otukolo, posing with rapper (and Instagram star) Snoop Dogg at a football game at Bishop Gorman High School in Las Vegas.

Both Sister 'Otukolo's brother and Snoop Dogg's son Cordell Broadus play football for Bishop Gorman. It was the coolest Mormon moment in 2014 for sure.