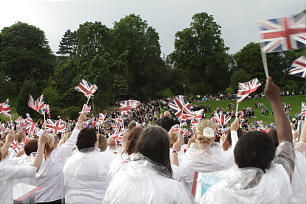 175th anniversary of arrival of missionaries to British Isles

On Saturday evening July 7, more than 1,000 members, friends and local dignitaries from across the United Kingdom gathered in Lancashire, England, at Preston's Avenham Park to celebrate the 175th anniversary of the arrival of the Church in Britain.

On July 19, 1837, seven missionaries dispatched by the Prophet Joseph Smith, including apostles Heber C. Kimball and Orson Hyde, landed at Prince's Dock in Liverpool. They soon made their way to Preston, where they arrived in the Market Place on a busy Saturday, July 22. It was the middle of a general election, called following the ascension of the young Victoria to the throne of Great Britain. As the missionaries descended the coach a political banner was unfurled from a window above them. "Truth Shall Prevail," it proclaimed. The missionaries thought it a provident sign and with resounding "Amens" they immediately adopted it as the motto of their mission to England.