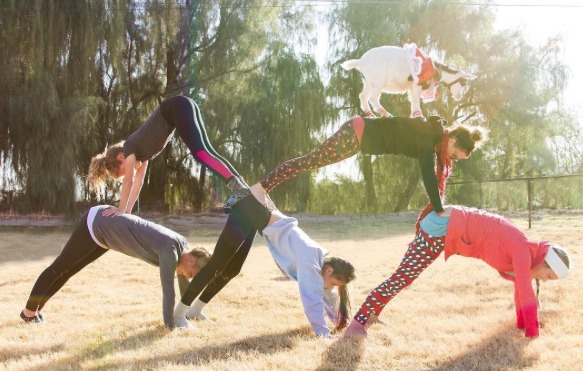 As the new year approaches and some are looking to expand their fitness goals, there's one unique option to consider—goat yoga.

No, it's not an acronym for greatest of all time yoga—it's literally people doing yoga around goats.

Like many people, you are probably wondering why goats and yoga? Well, it all started at a farm in Oregon, but it's recently become popular in Arizona where two LDS moms and American Ninja Warrior contestants, April Gould—who owns a small goat farm—and Sarah Williams—who teaches paddleboard yoga—decided to combine their two separate passions.

"When my paddleboard season started to slow down, I was thinking, 'We should do something with your goats and yoga,'" Sarah says. 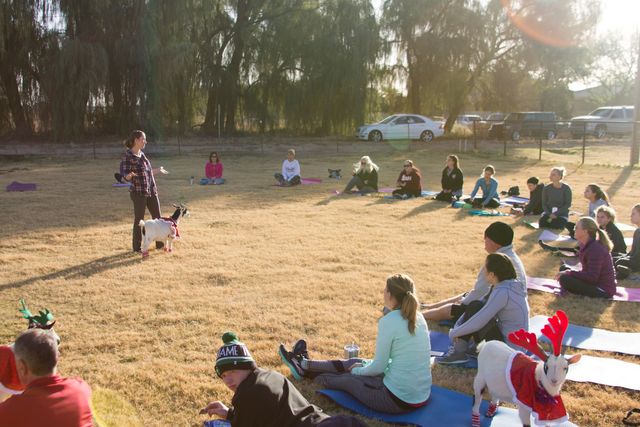 And so the two began organizing two to three hour-long yoga classes a week on April's small farm in Gilbert, Arizona. Sarah, with more than 20 years experience teaching yoga, would lead the classes. April, also known as "the goat whisper" for her 15 years experience training with and raising goats, would provide eight goats for each class.

And from the very beginning, Sarah says the classes were popular. After posting a lesson on social media, her classes even began garnering attention from several media outlets, including USA Today.

Enter to win...2 spots to our SOLD OUT class THIS Saturday at 10:30! Just tag a friend & you'll be entered in a drawing! We will notify you Thursday if you win! 🐐🐐🐐🐐🐐🐐🐐🐐🐐🐐🐐🐐🐐🐐🐐🐐🐐🐐🐐🐐#acroyoga #yogaeverydamnday #goatyoga #yogachallenge #yogainspiration #yogapants #yogagirl

Today, goat enthusiasts, yoga enthusiasts, and husbands reluctantly attending with their wives quickly fill up each of the 60 spots in every class, Sarah says. Each of the $10 classes has a theme with the goats dressed up accordingly and though the sessions begin in the fall and run through April, they are often sold out three weeks in advance. But there's sometimes a little wiggle room for someone visiting from out of town—they've already had participants from as far as India.

"We even had a lady from England who loves goats," Sarah added.

But there's definitely a payoff from this unique form of exercise. As each of the emotional support certified goats roam around the class, sometimes even perching on the backs or stomachs of participants, the result can be fun and therapeutic as endorphins are released through exercise and oxytocins are released through pet therapy, Sarah says.

In fact, yoga takes up only 45 minutes of the sessions, with a break provided in the middle of the class for participants to incorporate the goats into acro yoga poses, and there's even a professional photographer in the wings to take pictures.

"By the end of the class, everyone just leaves really happy," Sarah says. "So somehow it's made everyone comfortable enough. They didn't have to do that much yoga, but they still kind of got out of their comfort zone and did something fun. So the happiness is definitely the best part."

Sarah and April have also noticed the effect just being happy themselves has had on the people they interact with through goat yoga.

"People ask a lot about us," Sarah says. "They see how happy we are and that we've created something kind of fun, so a lot of people ask us about Church stuff."

With seven of the eight goats currently pregnant, Sarah and April anticipate an even greater bliss over the addition of 16-20 baby goats. They're even thinking about throwing a baby shower for the goats.

And if grown-up goats weren't enough of a pull for people to attend their yoga classes, the baby goats are set to help in boot camp classes.

"Who could resist a baby goat?" Sarah asks.