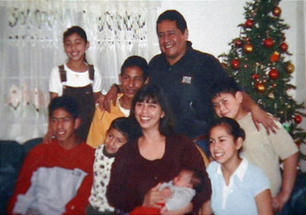 Considering all that had happened to her family in the past 24 hours, Aracely Carias is the picture of calm.

Her husband, Manuel Antonio Carias-Odonez, who had been president of the LDS Church's South Cache Spanish-speaking branch, was deported to his native Guatemala on Monday.

"They sent him to Arizona all chained up like he was a robber or something," Carias said in a telephone interview.

The couple's youngest children, ages 18, 14 and 8, are worried about their father and about a future that will likely mean moving to Guatemala to keep the family together.

"It's really stressful, especially for my kids. They really need their dad," Carias said.

Carias-Odonez had been detained in the Weber County Jail on an immigration hold since May 20. He was released to federal immigration officials on June 9.

Carias is planning what to do next. She is committed to keeping her family together. That means they will have to leave the United States for an uncertain future in country that is unfamiliar to them. Her husband was trained as a physician and she as a teacher so they should be able to make a living. For that matter, Carias-Odonez was underemployed while living in the United States.

"We've been compensated with the tranquility of this place," she said. "We just love this place because there is no violence. There is a lot of violence there."