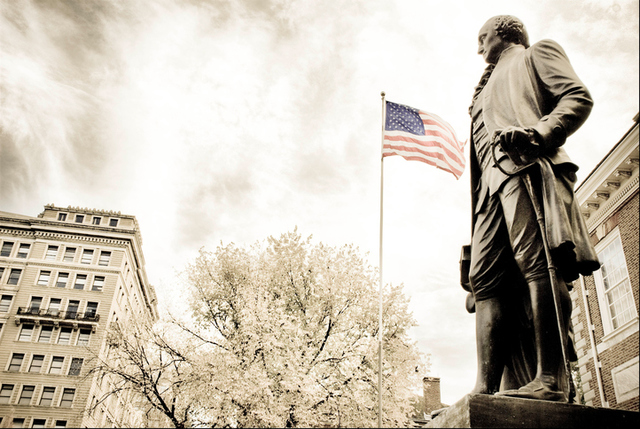 The Miracle of the Fog

In the summer of 1776, Washington and his troops met the British in battle on Long Island. The superior British army struck hard and fast, and the Americans were devastatingly defeated. As the Americans attempted to retreat across the East River back into New York City, the British responded by sending their fastest ships to cut off Washington’s escape route, with the intention of surrounding the rebels on all sides. The British commander knew that such action would compel an American surrender, as Washington’s entire Continental army would be trapped. This would be the end of America’s hope for independence.

After giving their all, the Americans were now in a hopeless state, which is often when the Lord enters the scene.

Washington led only a ragtag group of civilian soldiers numbering well under half the count of British troops. Worse yet, Washington did not have even a single warship at his disposal.

But the great leader had a weapon on his side more powerful than the British army could imagine: faith. In July 1776, he called for chaplains in each regiment to ensure that the soldiers “attend carefully upon religious exercises.” Keeping the Sabbath was emphasized, and one observant New Yorker, unaccustomed to seeing a pious group of soldiers, wrote of his surprise to see how Washington’s men attended prayers “evening and morning regularly.” Washington’s officers also documented how they held prayer services and Bible studies.

As they sat trapped at Brooklyn Heights, all they could do was hope and have faith that they would be blessed for their efforts to “live, and act, as becomes a Christian soldier defending the dearest Rights and Liberties of his country,” as Washington had urged.

As the redcoats continued to close in on the trapped army on Long Island, they were already preparing dispatches back to London declaring the war over. It was then that Washington finally spoke. He told his men that they would cross the river by the cover of night, landing safely back in Manhattan. Then they would get out of New York altogether. The obvious reply from Washington’s war council was How?

It would seem impossible to secretly ferry more than 9,000 troops, along with their baggage, guns, horses, and equipment, across the mile-wide river all before the light of day exposed the scheme. Furthermore, after laying out his plan, Washington pulled back and waited three days to execute it. What was he waiting for? Apparently, the timing had to be just right. The Lord was preparing something.

As the sun dropped on the third night, Washington turned to General Israel Putnam and declared: “God is propitious tonight.” The Lord was ready. Washington acted. Leaving a few men to make it sound like everyone was still in camp, Washington began loading his men on as many boats as he could find, borrow, or commandeer. The miracle began.

The British navy, which should have otherwise already been in the waters Washington was crossing, was having a little problem. A ferocious wind from the north had been pushing the British back down the river. A total of five ships carrying more than 72 guns attempted but failed to advance up the river to cut off the Americans. Washington had the window of opportunity he had prayed for.

As the evacuation began, the Americans again fell into despair as the same wind that kept the British from advancing up the river was also making it impossible for them to manage their overcrowded rowboats and transport their army westward to safety. Then, a little after nine, the wind miraculously shifted and blew in a westerly direction, facilitating the exodus with most favorable conditions.

But even with the favorable wind, the night was dying fast. Troops in substantial number still had to be evacuated, and at the rate things were going, it appeared day would dawn before everyone was safely removed. But again the “elements” interceded—this time in the form of pea-soup fog. It was called “a peculiar providential occurrence,” “manifestly providential,” “very favorable to the design,” “an unusual fog,” “a friendly fog,” “an American fog.”

And as daylight came, the fog held, covering the entire operation no less than had the night, while over on the New York side of the river there was no fog at all.

The escape was a success, and without a single casualty. Though one battle had been lost, many lives had been miraculously spared to fight for freedom another day.

Fulfillment of a Prophecy

The appearance of fog wasn’t unexpected to everyone, though.

A few months before the Long Island battle and the miraculous escape of the American troops, Washington issued a call for a holy day of prayer and fasting:

“Friday [May] 17th, Instant to be observed as a day of fasting, humiliation and prayer, humbly to supplicate the mercy of Almighty God, that it would please him to pardon all our manifold sins and transgressions, and to prosper the Arms of the United Colonies, and finally establish the peace and freedom of America, upon a solid and lasting foundation.”

This was not a simple or formal prayer. It was the recognition of a covenant relationship. It was a call to repentance and righteousness, even those things that would bring the blessings of heaven. He followed up the call shortly thereafter with another, which declared that “the fate of unborn Millions will now depend, under God, on the courage and conduct of this army. . . . Let us therefore rely upon the goodness of the Cause, and the aid of the Supreme Being, in whose hands Victory is.”

From a higher view, it seems the hosts of heaven also would have been praying, cheering, supporting, and helping the American cause. Can we not suppose that the angels of God looked down upon Washington in his predicament at Long Island? Certainly those throngs of deceased souls understood what hung in the balance because it affected them on a very personal level. Millions upon millions were waiting for their temple work to be done, waiting for salvation. No government in the world had afforded the liberty necessary for the restoration of priesthood and temples to the earth. This was their chance—but that chance seemed to be fading quickly. Should Washington and his army be captured or destroyed, hope for freedom—the kind required for the Restoration—would disappear.

But John Witherspoon, one of the signers of the Declaration of Independence, knew what Washington had known in New York. And he revealed it to the world on the national day of fasting and prayer on May 17, 1776. A deeply religious man, Witherspoon was certainly fasting with the rest of America on that day, per the request of the general. During the fast, he gave a sermon: “Nature affords countless chinks in its regular workings through which the Divine Artist . . . can govern events.” He then gave an astonishingly specific prophecy. “The armies of the enemy . . . are rendered irresolute,” declared Witherspoon, “when . . . rains make the terrain of the final charge impassable; [and] an unforeseen fog brings operations to a halt.”

Once again, it seemed that Washington, and those who fought with him in righteousness, had a purpose to fulfill and were protected by divine assistance.