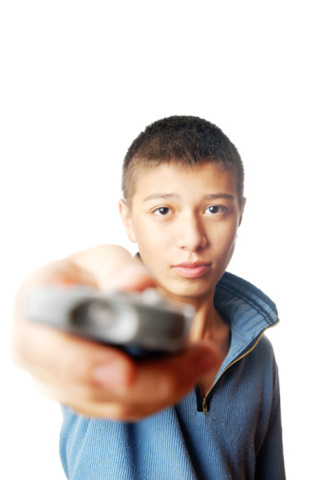 20 Ways to Unplug from TV

The television is on for 6 hours and 47 minutes each day in the average American home, adding up to 250 billion hours of TV watched by Americans annually. That's a lot.

Even infants and toddlers--up to two-thirds of them--spend two hours a day watching TV. And all that television watching can lead to some negative effects. With such an early start, most children will have seen 200,000 violent acts on television by age 18 and viewed 40,000 commercials per year.

Brittany Nelson, a mother of four in Gilbert, Arizona, reflects on her family’s experience with television when she was a teenager. When her family was making a move to Hawaii, her father and brother went there to find a place to live. Their apartment had no television, and when the family arrived, their experience was a catalyst for deciding to try living without TV.

“It was hard. My younger sister . . . and I would walk up to BYU-Hawaii, and use one of their television sets to watch our shows,” Nelson says. But, “as the weeks went by without a TV in our home, my sister and I started noticing how offensive our Thursday night programs were. Since we weren’t exposed to it on a daily basis, we were used to living without the profanity, the immorality, and the scandals. My sister and I argued a lot more on the days we watched TV. About six weeks after moving there, we didn’t want to see the shows anymore. We were happier living without them.”

Robert Kubey, director of media studies at Rutgers University, and Mihaly Csikszentmihalyi, director of the Quality of Life Research Center, found supportive data for this behavior in a study on the effects of television, published in the February 2002 Scientific American. They found that, “after playing sports or engaging in hobbies, people report improvements in mood. After watching TV, people's moods are about the same or worse than before.”

Most television watchers think that they enjoy watching TV, whether alone or with their families. But when many families experiment with removing the television sets from their home, they find surprisingly positive results.

Getting Over the Hurdle

James Douglas, a junior at Southern Virginia University, remembers growing up playing video games and watching TV all day, alone, in his basement (it was too cold for anyone else to want to go down there). He’d emerge for dinner then head back down for TV solitude. Then, when he was 15, his parents decided to try canceling the cable for a while.

“I didn’t know what to do with myself,” he says. “For a while I still went into the basement at home and worked on puzzles. After a couple of weeks, I permanently emerged from my basement cave. My buddy and I decided to join the track team that spring. I found other things to do with my time. I even joined a math club at school.”

He continues: “When my parents asked my sisters and me if we wanted the cable services back, the vote was a strong, unanimous ‘no.’”

Douglas’s experience with unplugging is not uncommon. Many people experience feelings of withdrawal when they first begin toning down on the time they spend watching TV.

In their study, Kubey and Csikszentmihalyi attempted to determine whether TV watching can be habit forming. They found that excessive TV viewing has many of the same characteristics as substance dependence, including “spending a great deal of time using the substance; using it more often than one intends; thinking about reducing use or making repeated unsuccessful efforts to reduce use; giving up important social, family or occupational activities to use it; and reporting withdrawal symptoms when one stops using it.” All of these side effects were mentioned by regular TV watchers.

Addictive behavior occurs largely because the mind relaxes while watching television and comes to resent not having that turn-off time. In other words, the mind becomes conditioned to need the television.

How to Get Started

With all of that in mind, here are some tips to help you cut some of the television time from your life.

1. Make rules for watching times. For instance, allow only one hour a day or one day a week, excluding weekends, that kids can watch a program or a movie, and they all have to decide what to watch together. Or, simply do not allow television unless homework and chores have been completed for the day.

2. Designate certain days when no TV is allowed. Sunday is a great time to cut out the TV and focus on things learned at church or read in the scriptures. Get children involved by having them list what they learned and then have them give a mini-lesson before bed.

3. Break out the board games. Games are a great way to have fun with friends and family. Some popular games include Apples to Apples, Mad Gab, Life, Monopoly, Scrabble, Phase 10, Taboo, Boggle, and Scattergories. You can easily spend hours laughing and interacting with friends.

4. Plan weekend activities to fill up time. Don’t get stuck at home on a Saturday just watching reruns of your favorite sports games. By planning activities, you decrease the risk of defaulting to the TV. Look for projects you could do around the house, set up a day out for a family hike, start a gardening project, or visit a museum or park.

5. Give yourself and your family a “time exchange.” For every half hour you or your kids spend watching TV, spend an hour outside doing some sort of physical activity or reading a book. This is a great way to keep you or your children fit and mentally engaged.

6. Keep your mind alert while watching TV. Do a crossword or Sudoku puzzle. If you and your kids have a hobby, like sewing or making crafts, bring out your materials while you watch your show. You could also make multitask with mundane jobs like folding the laundry.

7. Bring something to read. When waiting for an appointment, it might be tempting to watch whatever program an office’s TV is currently playing. Bring out a book or magazine for your child and you to read.

8. Conduct a TV fast. Several families have seen positive results after not watching television for a certain amount of time. Try going without TV for a week—or more if you think you can handle it—and get feedback from family members on how the fast went.

9. Keep a television time journal. You may not be aware of the amount of time your family is spending in front of the TV. Record in a journal for two days how much time the TV is on and what programs are being watched, and you'll likely be shocked by the results.

10. Get rid of personal televisions. It’s more tempting to watch TV if you have one in your bedroom, one in your kitchen, and one in the family room. Give away all but one television and limit television-watching to only one room in the house.

11. Create a book adaptation club. Lots of movies are based off books--Pride and Prejudice, The Invention of Hugo Cabret, The Lord of the Rings, Ella Enchanted, etc. Get your family together and plan books to read for each month. Don’t watch any movies until everyone has finished the book. At the end of the month, watch the movie adaptation and meet with the family to discuss differences between the book and the movie, what the kids liked/didn’t liked, etc. You'll often discover you like the books better than the movies.

12. Simplify your program list. Most people go through phases of engagement in their programs. Make a list of all the programs your family enjoys watching and then cut it down to two or three that you could plan to watch each week. Cut out all other TV time, and your family can spend your week looking forward to that one or two nights a week that you can watch your scheduled show.

13. Change the type of TV you watch. If you’d rather not cut out your cable completely, go ahead and subscribe to only educational programs like Discovery, Animal Planet, NBC News, etc. Make television a learning tool instead of an entertainment center.

14. Don’t replace shows. Television shows are constantly being taken on and off the air. When one of your shows gets cancelled, don’t start looking around for the next best thing to pick up.

16. Figure out what you enjoy doing. Have each member of the family make a list of 10-15 activities they like doing (this could include anything from baking to longboarding). When you or your kids are bored and start to turn to the television, take out the list and choose something from it to do instead.  (Remember not to turn to some sort of social media to cover that two hours of television fasting.)

17. Use television as a reward. Make children earn their television time, not just expect it. You can set up a daily chore chart or a “Kind Acts” chart with a point system allowing them to watch television when they reach a certain point number.

18. Give an award to the child who watches the least TV each week. Set a maximum amount of time that children are allowed to watch TV each week. If the kids can watch less than that amount  by the end of the week, give them a special award (this could be a toy, a day out with a parent, a favorite dinner). Continue to cut back on the maximum amount of time allowed each week until you reach an appropriate number.

19. Have a “television alternatives” area. When your kids are bored, send them to a special area or room in the house that has art supplies, books, games, beanbag chairs, and other fun things. Focus on supplying items that would stimulate creativity.

20. Set long-term goals and rewards for completing them. Everyone needs an incentive to do difficult things. If you decide to try cutting out television altogether, set a goal and a reward for reaching the goal. For example, you could set a goal to cut out television for three months, and at the end of the three months, take the family on a nice vacation if they were successful.

Click here to take our poll on technology boundaries for kids, or click here to read more about the delights and dangers of the media.