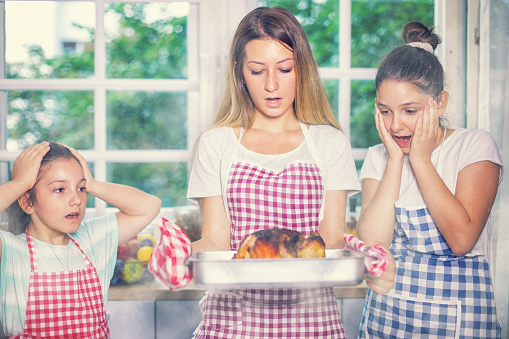 Hilarious Thanksgiving Cooking Disasters That Should Never Be Repeated. By Anyone. Ever.

Editor's note: The following responses were edited for clarity and length.

There's nothing like sitting down to a Thanksgiving feast. The rolls, the pies, the mashed potatoes, the stuffing, and, of course, the turkey laid out before you, ready for the consuming. It's the perfect meal—sometimes.

We asked you what your most epic Thanksgiving cooking disasters were, and we have to admit, these took us by surprise. Because we hope none of these are repeated, by anyone, ever, we decided to warn you about these disasters you should try to avoid at all costs this year.

1. Someone had hidden a plastic bowl of candy on the top shelf of the oven. When we went to bake several Thanksgiving pies, the plastic bowl began to melt everywhere, all over everything. It took me several hours to clean the mess before we could even start the rest of the meal, and the house stunk for several days of burnt melted plastic.

Kitchen fire = 20+ relatives (children) running into the snowy outside w/o coats while Uncle unleashes the fire extinguisher!!

Plus, no coconut cream pie

3. The power went out and we had to cook the turkey outside in the snow and wind on the barbeque. It finally got done but it was REALLY late!

4.  I looked out the kitchen window and the turkey fryer was on fire with flames shooting toward the awning. The thermostat had broken and the fryer was running on high!

5. First of all, I am usually a really good cook! But, as a newly wedded Mrs., I wanted to fix my new Mr. his favorite Thanksgiving treat—my first pecan pie. I made my own pie crust, mixed sugar, eggs, corn syrup, and nuts together and poured it into the crust and popped it in the oven. When the timer beeped, the pie wasn't set—it was still jiggly and soupy, so I left it in for another few minutes. Timer beeped, pie still jiggled. Left it in again. Fast forward about 45 additional minutes and I was assuming my oven was malfunctioning. I asked my husband to come check it. He informed me that a pecan pie would gel as it cooled. Oops! That pie was un-cuttable and hard as a rock when it cooled. We made a Walmart run for more corn syrup, nuts, and a premade crust so my hubby could have his pie!

6. Two years ago, I was in the middle of cooking the mashed potatoes. I went to get a ceramic tray out of my cupboard and another one fell, hit my granite counter top, and shattered. One piece shot out and hit my leg!! I bled like crazy!!! So I spent Thanksgiving at the emergency room getting stitches. And my 18-year-old son made the mashed potatoes. Now that's one way to get out of cooking!!

7. The time I put the turkey in and left the house, only to return hours later and discover that the turkey was bad. How bad, you ask? The horrifying stench pervaded every inch of my house for days. I still shudder when I think about it.

8. Making a pumpkin pie after cooking the leftover pumpkin from Halloween. Didn't turn out as good as I was hoping.

10. The turkey blew up in the oven not one year but 3 years in a row. We have no luck with turkey.

11. When my mom used powdered sugar instead of cornstarch to thicken her homemade gravy and wondered why it wouldn't thicken.