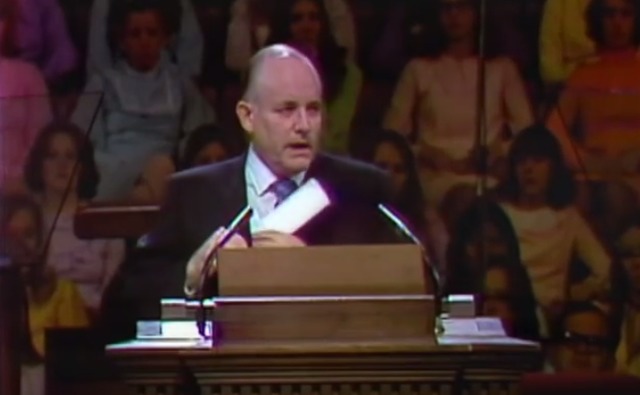 269 Words: The Shortest Talk in the History of General Conference?

Last spring I came across an article on My Best LDS about what could be the shortest general conference talk ever given. Now, a fact like that is hard to prove considering we do not have transcripts for every conference talk given in our Church's history, but it seems likely that this could be the shortest talk ever given in general conference, especially considering that speakers in the 1800s were not known for their brevity.

Here's a quick anecdote to illustrate that fact: During the first general conference held in the Salt Lake Tabernacle in 1867, President Brigham Young asked speakers to keep their talks brief since there were a lot of subjects to cover, including the need to educate women for business so men could focus on construction and agriculture. Even with that plea from the prophet, the conference lasted three days (George W. Givens, 500 Little-Known Facts in Mormon History).

It's important to understand when I say shortest conference talk, I am not including closing remarks. Those tend to be brief and to the point, such as President Gordon B. Hinckley's closing remarks in October 2007 that amounted to 173 words total.

No, the following talk was scheduled on a Saturday afternoon in the spring on 1972 and was not even the last talk on the docket for that day. However, long before he was president of the Church, Elder Howard W. Hunter approached the pulpit and did something unexpected.

Guided by the Spirit as well as a consideration for Church members' time, he folded up his talk notes and instead told a brief but powerful story. Elder Hunter put into practice that moment one of my favorite adages from President James E. Faust: "meetings don't have to be endless to be eternal."

Listen to the talk for yourself. It lasts less than three minutes and contains only 269 words: