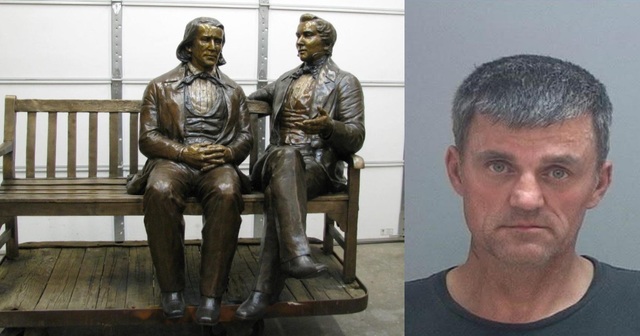 3 Charged in Theft of 800-Pound Joseph Smith, Brigham Young Statue (+ Why They Stole It)

On May 23, a $125,000 statue of Brigham Young and Joseph Smith was stolen in Salt Lake City. Here are the latest developments.

Three people involved in the theft of an 800-pound bronze statue of Joseph Smith and Brigham Young have been charged.

According to charging documents, the defendants did intend to do what Salt Lake City police feared and "cut the statue up and (sell) the pieces as scrap metal."

William Ford, 47, of Sandy, and Jacob Ferguson, 40, who is listed as homeless, were charged Thursday in 3rd District Court with theft, a first-degree felony. Larry Forness, 52, is listed as a co-defendant.

Mormon Life CrimeCrime,Mormon Life
Comments and feedback can be sent to feedback@ldsliving.com