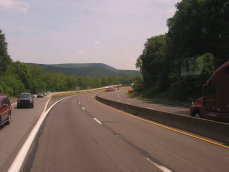 Mable Firstap was driving between Ohio and Pennsylvania when she spotted three clean-cut men walking on the side of the road.

“They just had a glow about them, so I didn’t mind stopping to see if they needed help,” said Firstap. “When I did, I saw that they were each carrying a Book of Mormon.”

Firstap told them that she was LDS. “They told me that I needed to get my food storage in order. Then they actually vanished! I couldn’t believe it!”

And neither should you.

The three Nephites, as we know from the Book of Mormon, exist, but Ms. Firstap doesn’t. Her name is a combination of today’s date and the month—April 1—April Fool’s Day.

Furthermore, while the three Nephites exist, their exploits have become the stuff of legend. In fact, William “Bert” Wilson, a real-life folklorist who specializes in LDS stories, has said that he has over 1500 stories about the three Nephites. (To clear things up, "folklore" stories are any stories passed orally - they include both myths and true events.)

“The story [of the three Nephites] emerges right from the account of the Book of Mormon, which opens the possibility that they’ll still be around today. It leads people to wonder, ‘Where are they? What are they doing?’ And strange or unusual occurrences naturally get chalked up to them, if it fits the pattern well enough,” said Eric Eliason, another LDS folklorist, and a professor of folklore and literature at BYU.

Exciting accounts of these three strangers are only part of a larger group of myths in LDS folklore, which include a story that British band U2 was once on the verge of conversion, that a Japanese bomber refused to bomb the Laie Hawaii Temple during the bombing of Pearl Harbor, and something about Yoda in “Star Wars” being modeled after Spencer W. Kimball.

“Stories are popular in any culture—part of the fundamental human need to tell stories that speak to our concerns and values,” said Eliason. “The LDS ones aren’t, in many ways, that much different from the stories that anybody else tells. But because of our own particular culture, we have our particular version of certain stories.”

The DVD "Mormon Myth-ellaneous" explores some of the best-known (and lesser-known) Mormon stories out there. Some are closer to truth than you might believe. And some, as you suspected, are completely ridiculous.

One story is told that Alice Cooper, world famous rocker, was raised LDS (with a father named Ether Moroni Furnier, it is believable). While not exactly true, Cooper’s family was part of The Church of Jesus Christ, an offshoot of the Church founded by Sidney Rigdon. His grandfather was even an apostle in that church.

As for the U2 and Laie myths, both are believed to be false, although no definite evidence exists to prove their falseness. Spencer W. Kimball as the model for Yoda is untrue, according to Nick Maley, the assistant model maker for Yoda.

But, when it comes to folklore, perhaps truthfulness or falseness shouldn’t matter so much. According to Eliason, we might be better served by looking at what it teaches us.

“I haven’t found anywhere where Jesus Himself makes clear whether the parables are true. I think we assume that they are stories—that there wasn’t necessarily an actual Samaritan. But He doesn’t say, which I think might be telling us something—that that’s not what’s important about them, whether or not they actually happened. But, by golly, that’s sure how a lot of people want to approach Mormon folklore, as if that’s the only important question to ask about them,” said Eliason.

So even if those stories about mysterious warnings from the three Nephites or about famous Latter-days Saints didn’t actually happen, they can still reveal a deeper principle. And they’re certainly still fun to hear.