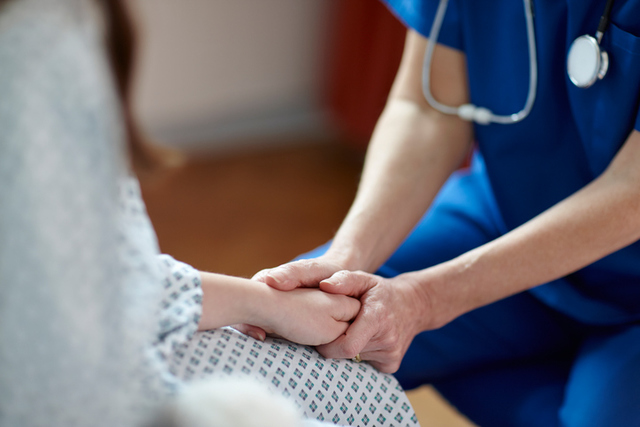 In March of 2011, Stacie Crimm cried with joy upon learning that she was finally pregnant at the age of 41. It was a happy, miraculous moment, as doctors had previously told her that she would never be able to have a child. However, the elation was short lived. A few months into the pregnancy, Stacie began experiencing severe headaches and double vision. A medical scan revealed that she had an aggressive cancer spreading through her head and neck. Without treatment it would be terminal. Doctors informed her that the cancer could be treated with chemotherapy, but that would likely prove fatal for her baby. Stacie faced an excruciating choice: her life or her baby’s.

She chose life for her baby, fully knowing that it would cost her own. She declined the chemotherapy. Her one wish was that she would be able to live long enough to hold her newborn daughter. One afternoon in mid-August, Stacie collapsed in her home and was rushed to the hospital. Another scan showed that the invasive tumor had spread and begun wrapping around her brain stem, slowly killing her. After two days in the hospital, Stacie’s heart stopped. While medics rushed to resuscitate her, doctors decided it was best to deliver the pre-mature baby by C-section even though it was weeks before the due date.

The delivery was successful—a two-pound, one-ounce girl named Dottie Mae, who was rushed off to in intensive care. Stacie was revived, but her health continued to deteriorate in the weeks following the birth. Both mother and daughter required constant medical attention and were kept apart. By this point, the cancer had paralyzed Stacie’s throat, making it hard for her to speak or to be understood. She often fell unconscious. In September, her heart stopped once again. She quit breathing and lay dying, but again the doctors were able to revive her.

Everyone knew that Stacie’s remaining time was very short. They also knew of her wish. She had still not been able to hold her newborn daughter or count her tiny, perfect fingers, or look into her blue eyes. A few days later, Stacie regained consciousness briefly. Nurses wheeled baby Dottie out of intensive care, down the hallway, and placed the tiny infant on her mother’s chest. For several minutes, mother and daughter gazed into one another’s eyes while the nurses watched and wept. It was a sacred moment. No one said a word. Three days later Stacie passed away.

Women as Types of Christ

This year as Mother’s Day approaches, consider how mothers (inclusive of all women) are types (or reflections) of our Savior. They reflect Him in at least three important ways:

1) Like Christ, mothers also shed their blood and descend into the vale of death to bring forth new life. In some cases, as with Stacie Crimm, the mother forfeits her own life in order to bring forth a new one. Mothers then continue to sacrifice to raise, nurture, and bless their children.

2) Paul taught that the veil of the temple is a symbol of Christ’s flesh (see Hebrews 10:19–20). Given that, if Christ is the veil through which we must pass to eternal life, then I would submit that a mother’s womb is the veil through which all mankind passes to enter mortal life. Mothers are a veil on one end of our journey while Christ is the veil on the other end. The temple endowment provides us with an important reminder of this truth as the sisters are veiled as part of their temple clothing.

3) A mother’s love is often the closest thing a child experiences to God’s own love for us and it is through a mother’s love that we may first experience and begin to understand God’s love.

In these three ways, women are important types of Christ. May we each find a way to express our love and appreciation to the Mothers in our lives for the many sacrifices they make.