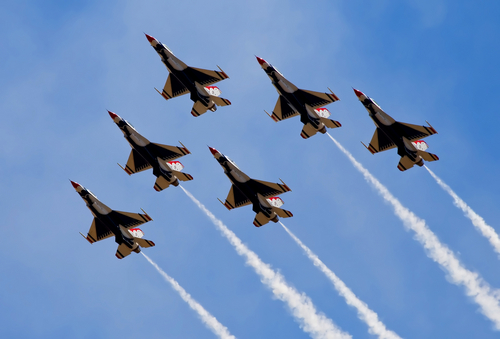 When Captain Chris R. Stricklin got up the morning of September 14, 2003, ejecting from his airplane was the furthest thing from his mind. The sky over Mountain Home Air Force Base in western Idaho was royal blue, without even a wisp of a cloud—a perfect day for an airshow. His aircraft, the F-16 Fighting Falcon sat fueled, polished, and ready to fly. He was a member of the elite United States Air Force Air Demonstration Squadron—the Thunderbirds—and he was about to give the gathering crowd a show they would never forget.

His was the last of six aircraft to takeoff, and Captain Stricklin pointed the nose of his aircraft skyward into a steep vertical climb. He rolled inverted, looked through the top of the canopy, and pulled the nose downward to perform a Split S (a half loop) at low altitude over the show center. Immediately, something didn’t look right. The ground was closer than he expected. He pulled back harder on the stick but soon realized that he was about to crash. With the ground rushing up to meet him, he aimed the doomed plane away from the crowd. Preparing for the ejection, he assumed the proper seating position as he had been trained. Milliseconds before the aircraft impacted the ground, he pulled the ejection handles. The aircraft exploded into a fireball in front of 35,000 shocked spectators. Thanks to the ejection seat, Captain Stricklin survived.

What spiritual lessons can we learn from his crash?

1) Even the best of us can make mistakes.

The accident investigation concluded that the cause of the accident was a mental error. The pilot simply misread the altimeter before beginning the maneuver. This mental error cost him 1,000 feet of precious altitude and made it impossible to complete the maneuver once he had pointed the nose of the aircraft at the ground (“T-Bird Crash Blamed on Pilot Error,” Mountain Home News, January 28, 2004).

It is difficult to become an Air Force pilot. Thousands who apply never make it into pilot training. Many who begin pilot training do not finish. Only those capable of handling high-performance aircraft by themselves are selected to fly fighters like the F-16. The USAF Thunderbird pilots are hand-picked from hundreds of candidates, all of whom are U.S. Air Force fighter pilots with a specific physical build, a steely-eyed look of competence, and of course, above-average flying skills. They are the best of the best, but that does not make them infallible.

Joseph Smith was called and chosen to be a prophet of God and to restore the gospel to the earth. The First Vision is miraculous, the truths revealed through Joseph are astounding, and the priesthood restored through him is essential to conducting God’s work on the earth. The Prophet Joseph was a chosen and inspired man, but even he was not perfect.

After being told “no” twice by the Lord, Joseph asked a third time for the Lord to allow him to loan 116 pages of the Book of Mormon’s translation to Martin Harris, who wanted to prove to his friends that the golden plates were real. On this third request, the Lord allowed Joseph to loan the pages. Unfortunately, the pages were lost while they were in Martin Harris’s possession. When he learned of this, Joseph exclaimed, “What shall I do? I have sinned—it is I who tempted the wrath of God. I should have been satisfied with the first answer which I received from the Lord” (Our Heritage: A Brief History of The Church of Jesus Christ of Latter-day Saints, Chapter 2 ). As you can imagine, it was a dark time for the Prophet Joseph. He was sorely chastened for his error, but after a period of repentance, Joseph was forgiven and continued the work.

Despite our best intentions, even the best of us will make mistakes: “If we say that we have no sin, we deceive ourselves, and the truth is not in us” (1 John 1:8). As Isaiah put it, “All we like sheep have gone astray” (Isaiah 53:6). Perfection is something we constantly strive for, but in the process of becoming perfect, we will make mistakes.

► You'll also like: 4 Mistakes We Make When Dealing with Trials That Only Make Them Worse

Accident investigators estimate that the Thunderbird pilot ejected 0.8 seconds before the aircraft impacted the ground. Any hesitation that day would have cost him his life. How was he able to make this critical decision in such a short amount of time? He was prepared.

Before the pilot was faced with his split-second, life-or-death ejection decision, he had given his brain years of training and volumes of information to help with the decision. He didn’t decide to eject in those few seconds of flight that September day. He decided long before he ever strapped into the first aircraft ejection seat during pilot training.

Student pilots spend hours preparing for the ejection decision before their first flight. They train by jumping off of platforms and practicing the parachute landing. They hang in the harness and rehearse post-ejection checklists and learn about dealing with potential malfunctions. They research aerodynamic charts and predetermine ejection altitudes for various acrobatic maneuvers and emergency situations. With the help of simulation, they practice the correct sitting position while pulling the ejection handles. By the time student pilots take their first flight, they have practiced and prepared for the ejection decision over and over again.

Likewise, our big spiritual decisions require preparation. As young men in captivity, Shadrach, Meshach, and Abed-nego decided to keep the commandments despite the consequences. Then, when they were commanded to either worship a false idol or face death by fire, they didn’t waver in their resolve. They told King Nebuchadnezzar, “We will not serve thy gods, nor worship the golden image which thou hast set up” (Daniel 3:18). They had already decided through years of spiritual resolve and preparation to be obedient regardless of the consequences. Miraculously, their lives were spared, but we would never have heard of their moral courage had they not prepared for that difficult decision beforehand.

We are taught that when we face tough spiritual decisions we “must study it out in [our] mind[s]” (D&C 9:8). In addition to studying those decisions out in our minds, we can seek guidance from the scriptures. We can seek counsel from parents, teachers, and Church leaders. We can solicit help through prayer. Like Shadrach, Meshach, and Abed-nego, we can decide beforehand to keep the commandments no matter the consequences. Then, when we are faced with difficult spiritual decisions, we will have the moral courage to do the right thing. Like the Thunderbird pilot, we will not hesitate in the moment of decision.

3) Crash trucks are standing by.

The airport emergency response personnel picked up the Thunderbird pilot within minutes of the accident and secured his safety. All airports are equipped with emergency response equipment and personnel trained to react quickly in case of an aircraft accident. The fire trucks are designed especially for dealing with fuel fires or extracting people from a damaged aircraft fuselage. The emergency personnel are specifically trained to find the crash site in bad weather and administer aid to passengers in shock as they exit a damaged airplane. They have the equipment and the training to help in the moment of crisis.

Likewise, spiritual crash trucks are also standing by. Through a prayer of faith, we can declare a spiritual emergency to our Heavenly Father and call upon heaven’s resources. Jesus Christ and the Holy Ghost stand ready to rescue and comfort. Church leaders are equipped with priesthood keys, special spiritual equipment, to help pull you from the wreckage of a moral crash. Parents, teachers, and leaders are trained in the gospel to rescue you from a spiritually damaging situation or choice. When you find yourself in trouble, declare a spiritual emergency through saying a prayer and by reaching out to appointed Church leaders, parents, and teachers. When you crash, spiritual crash trucks are standing by to assist with love.

Sometimes we are in need of rescue, and other times we are called upon to help rescue others. President Thomas S. Monson said, “The world is in need of your help. There are feet to steady, hands to grasp, minds to encourage, hearts to inspire, and souls to save” (“To the Rescue,” general conference, April 2001).

Jesus Christ is the Great Healer and provides us with the ultimate spiritual rescue through the power of His Atonement. He has power to save us from the spiritual crashes of our lives. He stands ready to pull us from the fiery wreckage and bind up our wounds. He has stated, “For behold, I, God, have suffered these things for all, that they might not suffer if they would repent” (D&C 19:16). Christ did not sin, and because of His infinite Atonement, we need not suffer the effects of a spiritual crash forever. Declare a spiritual emergency. Repent. His grace is sufficient.

Even though the Thunderbird pilot destroyed a multimillion aircraft in front of thousands of people, he survived a dangerous, low-altitude ejection and learned from the experience. After the accident, he went on to many professional accomplishments and rose to the rank of colonel. Like the Thunderbird pilot, sometimes our poor choices can lead to serious and perilous consequences that may leave us feeling embarrassed and unworthy, but we can learn from our experiences. Because of the Atonement of Jesus Christ, we can recover from spiritual crashes and continue on to receive eternal life.

► You'll also like: “He Will Get You Through”: President Eyring Shares Touching Message About the Savior, How to “Rescue” Others

Professional pilot and youth speaker Brock Booher helps us recognize and learn to responsibly use the most enabling tool we possess—moral agency. Don’t live life on autopilot. When mishaps and tough choices inevitably come your way, Fly, Eject, or Die helps you to prepare now, so that in the moment, faith will overcome fear and you can soar through any obstacles this earth life may hurl at you. Buy the book at Deseret Book stores and deseretbook.com.