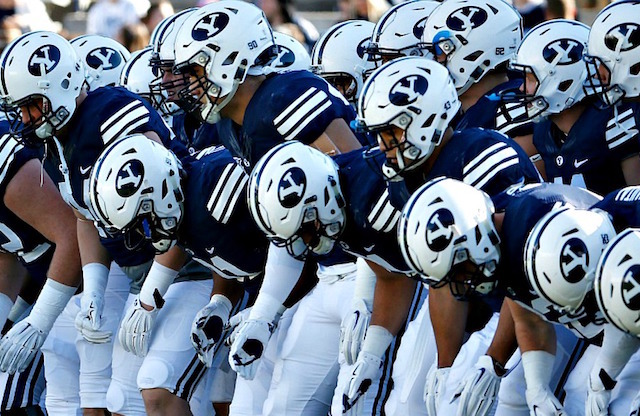 Ever wondered what BYU football players do before a big game (like a certain in-state rivalry in Utah this weekend) to bring them luck? While some people have a lucky rabbit's foot or a never-fail pair of socks, these former BYU football players have some crazy pregame rituals that they thought brought them luck.

Success can be a driving force, and no one knew that better than former BYU quarterback Sean Covey. According to Tales from the BYU Cougars Sideline: A Collection of the Greatest Cougars, Covey was gathered with his team in the locker room to dress for kickoff when he abruptly left.

You may know Steve Young for his skills as a quarterback, but you may not know he liked to get his hands dirty before a game.

According to Tales from the BYU Cougars Sideline: A Collection of the Greatest Cougars, Young would always request the dirt from the field he would be playing on in a paper cup. He then would rub the dirt between hands in order to get the feel of the place.

When the field was turf, he would ask for dirt from the planters surrounding the stadium.

Former BYU linebacker Todd Shell was known for getting extremely nervous before a game. In fact, he would get so nervous, he would often throw up before going onto the field.

But by the time he was a senior, Shell had a harder time getting nervous. For some reason, Shell still wanted to keep the ritual alive, however. According to Tales from the BYU Cougars Sideline: A Collection of the Greatest Cougars, Shell's teammate Tom Holmoe said, "If he didn't throw up, he wasn't ready."

What unusual pregame rituals do you or those you know have? Share them with us below!