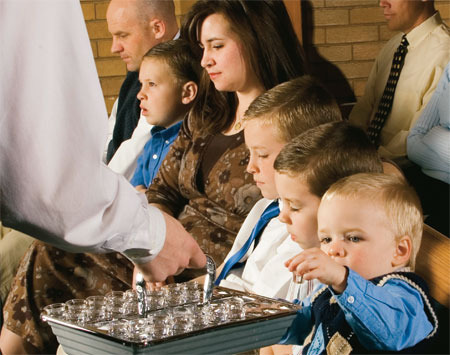 What do I think about during the sacrament? Over the years here are a few of the things I have thought and worried about that I am not so proud of (in no particular order):

My fantasy football team, my son coloring with red marker on the hymn books, Boston crème donuts (especially on fast Sundays), another son wiping his boogers on the hymn books, whether I could peg the bishopric with a well-made paper airplane, another son licking the hymn book, who would win in a fight between Darth Vader and Gandalf, preparing for the lesson I was teaching in 45 minutes, my daughter putting Strawberry Shortcake stickers on the hymnbooks (what is it with my kids and hymnbooks?). You get the idea. Between wrestling with young children and wrestling with my own distracted thoughts, I have too often ended up pinned in a 3-count of sacrament failure.

So let me turn the question around on you. What do you think about during the sacrament? Are you looking at a screen? Are you thinking about last night or today’s big game? Are you struggling with small (or older) children? Are you preparing a lesson you didn’t plan ahead for? Are you a little bored because you’ve been through this same thing about 1500 times before?

I have been trying to do better. And I have been succeeding more and more often! You can too.

Read the rest of this story at mormonnerd.com