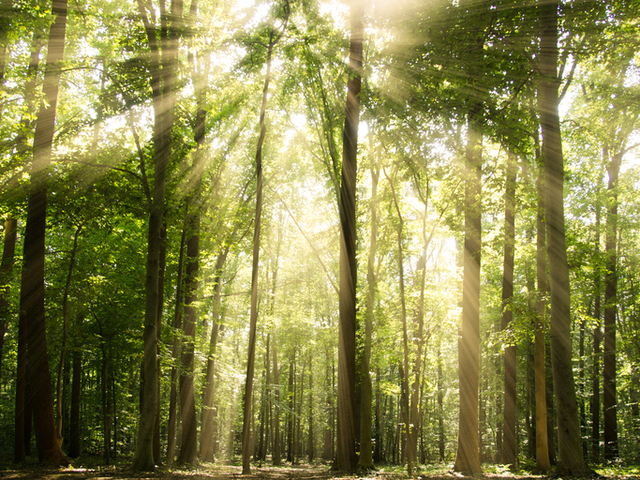 3 Ways the Restoration Actually Started Before the Sacred Grove 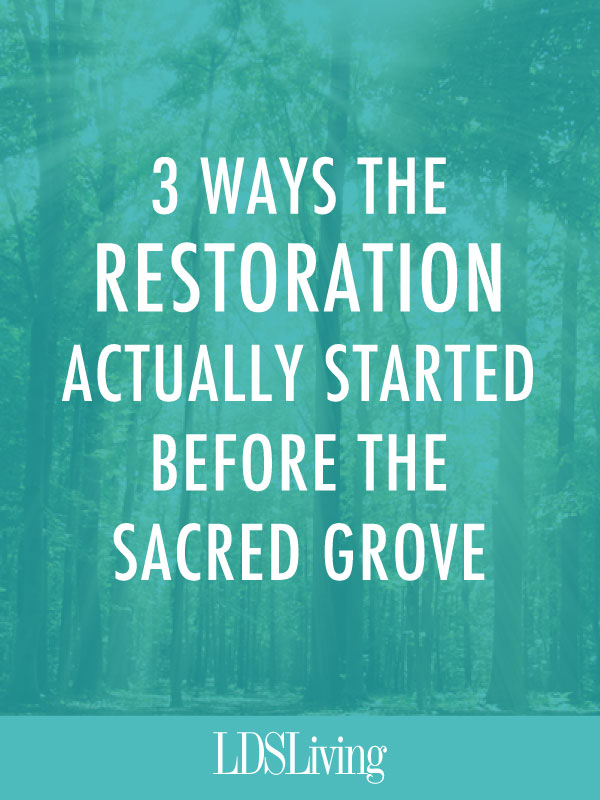 As Latter-day Saints, we tend to assume that the heavens were sealed until the Sacred Grove appearance in 1820 and that the Restoration didn't really begin until Moroni tutored Joseph and subsequently gave him the plates in 1827. But that isn't entirely true.

If we look closer, we can see that the Lord began to open the flood gates of revelation and spiritual gifts to many in the early 1800s, all in preparation for Joseph Smith's vision and the fullness of the Restoration.

Visions and Revelations in the 1800s

The religious culture of this time period produced many visionaries who published their manifestations in newspapers and pamphlets. Susan Juster, a non-LDS scholar, identified over 300 people who claimed visionary experiences during the time of Joseph Smith's parents (See Susan Juster, Doomsayers: Anglo-American Prophecy in the Age of Revolution. Philadelphia: University of Pennsylvania Press, 2003).

It is not surprising, then, to learn that Joseph Smith's parents believed him when he recounted the visions he had witnessed. For example, after conversing with Moroni on the night of September 21, 1823, and again the next morning, Moroni commanded Joseph to relate what he had seen and heard to his father. "I returned back to my father in the field," recalled Joseph, "and rehearsed the whole matter to him. He replied to me, that it was of God, and to go and do as commanded by the messenger" (History of the Church, 1:15). Joseph's father would have been aware of the visionary accounts that had circulated throughout the region. Indeed, Joseph Smith Sr. was a visionary man himself. His wife Lucy recorded at least seven heavenly manifestations he had received years prior to their son's First Vision in 1820.

Fulfillment of a Prophecy

The day Moroni appeared (September 21, 1823) was a holy day to the ancient Israelites and Jews. It was the Sukkoth festival, also known as the Feast of Tabernacles, which carried symbolic significance for the Restoration in the last days. God had commanded the Israelites to set aside this time every year for remembering their ancestors who wandered in the wilderness for 40 years (see Lev. 23:34; Deut. 16:13). In the New Testament period, priests led prayers at the temple during the Feast of Tabernacles. The prayers were accompanied by a ceremony of drawing water from the pool of Siloam (Jerusalem's water source) that was subsequently poured onto the altar at the temple. Both the prayers and the water libation ceremony were performed in supplication to God for rain. According to one non–LDS author:

"Rain was a prominent feature in the celebration of the Feast of Sukkoth. . . . The Rain represented the Holy Spirit and the water drawing pointed to that day when, according to the prophet Joel, God would rain His Spirit upon all flesh (Joel 2:28–29). . . . Rain also speaks of revival, restoration, and returning to God and trusting in Him. . . . The great rain or outpouring of God's Holy Spirit will come when the believers in the Messiah will earnestly pray to God that it be done. . . . God has already declared that he would pour out His Holy Spirit during the seventh month [Tishrei/September]" (Edward Chumney, The Seven Festivals of the Messiah. Shippensburg, PA: Treasure House, 1994, 181; 193–94). Notice that Moroni quoted to Joseph this very passage, Joel 2:28–29, which prophesied that in the last days God will "pour out [his] spirit upon all flesh; and your sons and your daughters shall prophesy, your old men shall dream dreams, your young men shall see visions." Also notice that Moroni appeared to Joseph in the Hebrew month of Tishrei, which is September.

The First Vision and Restoration were part of the fulfillment of this prophecy, but that was only part of it. Here are three other examples of situations that led up to the Restoration:

1. God the Father and Jesus Christ appeared to many people in Joseph Smith's day.

At least 20 people besides Joseph Smith saw God and/or Christ as a man, and a majority reported that the vision came in response to a prayer during a period of trial. Half were given specific instruction (four of which were told that no true church currently existed), and eight reported an evil presence just before the vision opened.

One notable individual was the well-known Protestant minister, Charles G. Finney, who saw the Lord face to face in 1821 while praying for forgiveness. Another individual, Norris Stearns of Greenfield, Massachusetts, reported seeing God the Father and Christ together in vision in 1815. This occurred during a time of deep reflection and intense depression of the soul. As he lay struggling with darkness, he saw a vision filled with light that grew brighter and brighter. He saw two personages, each in the form of a man.

Similar to Joseph Smith, another visionary, Nathan Culver, recorded in 1791 that his room gradually got brighter until he saw two personages, God the Father and Christ, at the Father's right-hand side.

2. Several people published visions containing messages about the Restoration of the everlasting gospel.

Several people who published their visionary experiences related the messages they received from the heavenly personages. For example, in 1810 an angelic personage appeared to Chloe Willey from Goshen, New Hampshire, and told her that the day would shortly come when the restoration of Christ's church would be established and would be accompanied by miracles and many healings.

When God the Father and Jesus Christ appeared to Norris Stearns in 1815, They told him that "a greater work . . . will soon be manifest; for the Angel that has the Everlasting Gospel to preach is coming" (The Religious Experience of Norris Stearns. Greenfield, MA: n.p. 1815). One year later, an angel appeared to Solomon Chamberlin from Old Canaan, Connecticut, and told him that all churches were corrupt and God would "soon raise up a church that would be after the apostolic order" (Solomon Chamberlain, "Short Sketch of the Life of Solomon Chamberlain, Written 11 July 1858," LDS Church Archives).

Another individual published his vision just 10 days after Moroni first appeared to Joseph Smith. In this vision, the Lord told Asa Wild of West Fairlee, Vermont, that every Christian denomination had become corrupt and that He was now raising up a "class of persons" that would receive the everlasting gospel. Further, this class of persons would have "higher authority, greater power, superior inspiration, and a greater degree of holiness than was ever experienced before." ("Remarkable Vision and Revelation; as seen by Asa Wild, of Amsterdam, N.Y.," Wayne Sentinel, 1, no. 4, 22 October, 1823).

3. Many people in the early 1800s documented their belief in the need for a Restoration.

These experiences and beliefs fit with the common view of the day. They were not square pegs in round holes. Numerous preachers and Bible commentators in the early 1800s believed that a restoration was both necessary and imminent. For instance, Elias Smith, a Baptist minister, left his church in 1805 and started a Church of Christ that sought to restore ancient Christianity.

Similarly, Presbyterian minister Barton Stone left his ministry and founded his own movement, the primary objective of which was to restore apostolic Christianity. He later merged with a similar movement led by Thomas and Alexander Campbell. This church, of which Sidney Rigdon was a key figure before joining with Joseph Smith, also sought to restore apostolic Christianity.

Many Bible commentators of the day attempted to use biblical prophecies in Daniel and Revelation to calculate when Christ's church would be reestablished, and they actually used the words "apostasy" and "restoration." Some among these commentators even predicted 1830 as the year of the Restoration. For instance, Methodist theologian Adam Clarke, the authors of Friends of Evangelical Truth magazine, and William Ward of the Church of England all concluded that a restoration of Christ's church, based on biblical prophecy, will occur in 1830.

Specifically, in 1830, Adam Clarke noted that people were beginning to experience an increase of the Holy Ghost and that "never were there times more favorable; never were spiritual advantages more numerous; never was light more abundant" than during this generation (W. H. Oliver, Prophets and Millennialists: The Uses of Biblical Prophecy in England from the 1790s to the 1840s. Auckland: Auckland University Press, 1978, 98). William Ward concluded that the year of 1830 would be "a year of spiritual revival and triumph, the greatest year in the calendar of the world" (William Ward, The Fulfilment of Revelation; or Prophetic).

These accounts are remarkable and illustrate that God had opened the heavens to all who were worthy in order to prepare a people to receive the Restoration. One non-LDS historian wrote concerning this generation: "in angels and divine messengers . . . nothing in their . . . practices was regarded as contrary to accepted Christian values or beliefs. It was a generation of seekers in search of faith by which they could govern their lives to the satisfaction of the Almighty" (Robert V. Remini, Joseph Smith. New York: Viking Penguin, 2002, 6.). It was in this context, in this culture, and among this generation that the Lord chose to reestablish his Church.

A Few More Points to Consider

Not all of these revelations are equal in scope and meaning; not all of them included all of the elements present in Joseph Smith's visions. These manifestations were granted to various individuals for different purposes. Specifically, the numerous visionaries of Joseph Smith's day did not claim that they had been prepared to oversee the work of restoring Christ's Church.

While it is true that a few of them attempted to start a religion or claimed to be a prophet (e.g. Elias Smith and Norris Stearns), none of them claimed, like Joseph Smith, that frequent manifestations from heaven prepared them, and gave them authority, to carry out the task of restoring Christ's apostolic church to the earth. Many of these visionaries were informed of the Restoration, were instructed to abandon all Christian sects and search the scriptures, or were charged to share their visions and insight with others; however, none of them came close to claiming or accomplishing that which Joseph Smith claimed and accomplished.

How can we interpret all these manifestations and visionary individuals of Joseph Smith's generation? Yes, they are interesting accounts, but what do they mean? How do they fit with the broader picture of the Restoration process? The many visionary accounts of Joseph's day teach important truths about the outpouring of spiritual manifestations in the eighteenth and early nineteenth centuries, which prepared individuals, families, and communities to accept the reality of angels, prophets, and visions and prepared many for the Restoration of Christ's Church as we know it on the earth today. 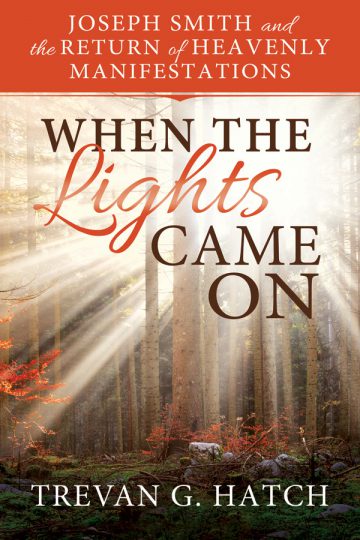 For more on this topic, check out Trevan G. Hatch's new book, When the Lights Came On: Joseph Smith and the Return of Heavenly Manifestations, available at Deseret Book stores and deseretbook.com.