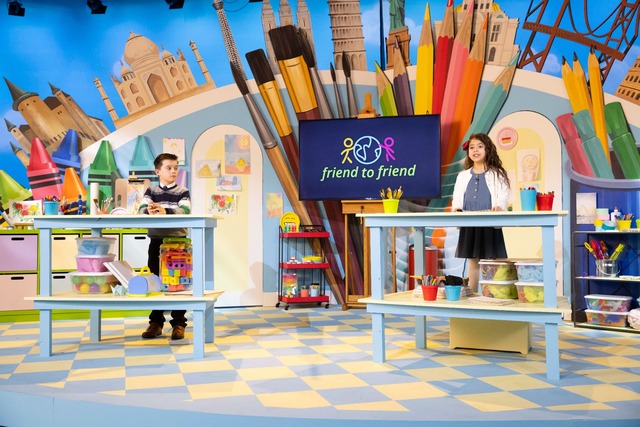 As I pulled out the kid-sized table and chair and tried to convince my almost-2-year-old to sit down before the Friend to Friend event, I wasn’t sure how things were going to go. As Primary teachers, my husband and I had been looking forward to participating in the event, but our son was a little younger than the target age for the broadcast and I wasn’t sure if it would hold his attention long enough for us to actually watch it.

Boy, was I in for a surprise!

He not only sat and watched, he participated—in his own little toddler way. I think that was partly because, as my husband described it, the broadcast felt a bit like a Church-themed television show, full of different activities to participate in, stories, bright colors on the set, relatable hosts and videos, and the perfect length for holding young attention spans, including our son's. As I watched the broadcast through the eyes of both a mother and a Primary teacher, I had a few powerful takeaways.

My son is what I will call a “pandemic toddler.” He is too young for school, he has not been able to attend nursery, he doesn’t have any siblings yet, and playdates haven't really been feasible during the pandemic. He has very occasional opportunities to play with cousins close to his age or see other children as we pass them on walks in the park, but for the most part, his social interactions are limited to adults—specifically his mom and dad.

As I watched him riveted on the children on the screen, though, it occurred to me how inspired and good this broadcast was, not only for other "pandemic toddlers" but for all the children who haven't been able to connect with others their age in a gospel setting. Before the broadcast started, I had watched the thread of comments from others waiting for it to begin. There were comments from children, parents, and Primary leaders in the United States, Canada, Iceland, England, Jamaica, Mexico, Scotland, Ireland, and dozens of places in between. The thought of so many children not only watching the broadcast but watching it at the same time was powerful to me. How incredible to have so many children in the world united in learning about the gospel of Jesus Christ—singing “I Am a Child of God,” telling scripture stories with rocks, and learning together.

I observed my son, who was watching the children on the screen learning how to draw a picture of a child praying. He would watch them for a few seconds at a time before turning to his own paper to make some more scribbles. He may not have completely understood what they were doing and what he was copying, but you could tell that he knew he was part of something, and he loved it. I imagine many children around the world felt the same way.

Watching the Friend to Friend broadcast reminded me of why gathering to worship together is important. Home-centered gospel learning is essential and so important, but there is power in gathering with others to learn about the gospel—and that goes for children, too! I think there was something special for them about hearing messages of faith from other children and in ways that they could participate in and understand. I look forward to helping to continue creating that connection as Primary activities are able allowed to resume.

2. Church Leaders Love and Are Concerned about Our Children

This broadcast definitely had a “by children, for children” theme to it, with two Primary children hosting the event, a story from a Primary child in Tahiti, two children as “field reporters,” and dozens of children from around the world in the musical number videos, but there were also some key appearances from Church leaders that left an impression on me.

It warmed my heart to watch the kind way Elder Ulisses Soares greeted the young “field reporters” who came to his office to learn about covenants, sharing an enchanting animated version of one of his personal stories about keeping his baptismal covenant by being honest, and doing so in words that children could understand. President Joy D. Jones also made an appearance, sharing a simple but sincere message of love for each of the children watching, encouraging them to serve others, and sharing stories of children around the world who have already been serving.

Perhaps most touching for me was the message from the Prophet. As I listened to President Russell M. Nelson address the children, I was surprised to find my eyes getting a little watery as the Spirit confirmed to me that this is a prophet of God. He loves and is mindful of the members of the Church, from the oldest to the youngest. There is something powerful about having a message directed just to you, and it is not often that children get a direct message from a prophet. It was a powerful conclusion to a broadcast, reminding children how much they are capable of while also reminding adults of the eternal worth and potential of these precious children in our care—as both parents and leaders.

Perhaps one of the best reminders I got during this broadcast was that children are amazing. They have such big hearts, bright minds, and a desire to do good. They grasp gospel principles better than we sometimes think they will, and I believe they do have a desire to do good. After listening to 45 minutes of stories from children or about them living the gospel, it was hard not to be motivated to be a little better myself and find more ways to help and serve these incredible little souls. From the enthusiastic children who hosted the event to the virtual singers and storytellers, all of the children had a quiet confidence and joy as they talked about the gospel—something that it can be easy to lose or forget in the busyness of growing up. It was inspiring and refreshing to remember all the good things that the children of the Church are doing and the positive ways they are responding to what we continually refer to as “these challenging times.” There is so much we can learn from their attitudes and faith!

Whether you have children or not, I would encourage you to take the time to watch this special event, which is still available online. After all, we all need an occasional reminder that we, too, are children of God.

Lead Image: Newsroom of The Church of Jesus Christ of Latter-day Saints