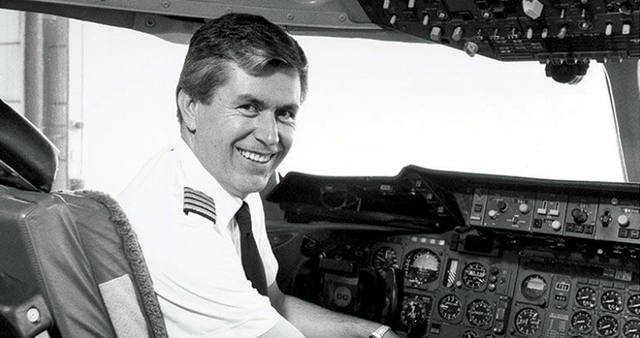 3 of Our Favorite Airplane Analogies from Elder Uchtdorf

From the time Elder Dieter F. Uchtdorf first took the pulpit at general conference, members around the world have loved his stories about airplanes and the poignant gospel lessons he draws from them. In fact, his history of sharing tales of flight has led many listeners to find themselves internally asking a question as soon as he gets up to speak—the same question Elder Uchtdorf voiced one memorable conference: “What does it have to do with flying an airplane?” Here is a collection of just a few of those aerodynamic analogies.

Directed by the Lord

On one occasion, my profession as a B-747 captain took me home on a flight from Dallas, Texas, to Frankfurt, Germany. I had just attended general conference of The Church of Jesus Christ of Latter-day Saints as a general authority. Now I was heading home while working in my profession I loved so much. One flight attendant asked if a few passengers could take a peek into the cockpit. When they entered, they explained that they too had attended general conference and were now surprised to have a general authority fly them home to Germany. We greeted each other happily and were grateful for the pleasant coincidence in our travel plans.

As the flight progressed, the day turned into a moonless night, and myriads of stars covered the sky. I contemplated this awesome sight from the cockpit, and my thoughts went back to the many miracles I have seen in my life.

One occurred many years ago, shortly after the horrors of the Second World War. I was baptized at age 8 in Zwickau, Sachsen, in eastern Germany. It came about because of Sister Ewig, a white-haired, courageous, and caring lady who shared the restored gospel of Jesus Christ with my grandmother and parents, and they did not hesitate to accept the challenge to follow the promptings of the Spirit and accept a new religion. How I love them for that! In 1952 my family had to leave that
part of my homeland, expecting never to see it again. We went to Frankfurt, where I was ordained a deacon and taught by tough but loving Church leaders to appreciate the value of work and service.

At the same time, in the heart of western Germany, another marvelous lady, recently widowed, still in her 30s, was terrified by the unbearable difficulties of the future. She had two young daughters and felt alone in her disheartening circumstances and in a country without hope. In her time of deep distress, two young missionaries rang the doorbell and brought the message of light, truth, and hope—and she accepted.

I give thanks eternally to Sister Ewig, to those diligent American missionaries, and to Sister Carmen Reich—who became my mother-in-law—for their faith, strength, courage, and willingness to listen to the still, small voice. My life has been very different because of the miraculous insight of these great individuals.

In 1976, President Monson gave my country a blessing with promises far beyond logical or political reasoning. It was a prophetic promise which required modern-day miracles. And the miracles occurred.

In 1989, the Berlin Wall fell, and about a year later, Germany was reunited. The borders were enlarged, and Zion was enabled to put on her beautiful garments— there are now two temples in Germany, soon to be 14 temples in Europe, and more to come. The kingdom of God is expanding rapidly into all parts of the world—even moving far beyond the geographic or political boundaries of yesterday. Missionaries are now serving in places most of us have to look up in dictionaries or cannot find easily on maps. Truly these are modern miracles.

Now back to that dark night over the North Atlantic. As we were safely directing our big jet to its destination, we had to be extremely careful and precise in entering the geographic coordinates into the navigation reference system. The navigation system relied on the information we had entered even before we had started our flight. This information had to be true and valid because it was the foundation for all future course decisions.

The gospel of Jesus Christ is the only true and valid basis for our lives. If we enter its values into our system—into “all [our] heart, might, mind and strength” (D&C 4:2)—we will know how to choose and follow the course back to our heavenly home.

On long-range flights, shortwave radio frequencies are still used to coordinate conflicting traffic. These frequencies are often crowded, and static distorts the messages. The same is true for our lives. Everybody wants to get their often conflicting messages across. We have to train and condition ourselves to hear the still, small voice, never to be distracted or to stop listening because of too much static on that sacred frequency. This can best be done by internalizing and acting according to the moral and ethical standards we receive from the scriptures and the living prophets.

From the Prophet Joseph Smith to our living prophet today, we are receiving updated sacred guidance according to our needs and readiness. The general conference messages by our prophets, seers, and revelators are given to us by the Lord in His own time, in His own way, and for a very special purpose.

Jesus Christ, the Son of God, is the source and foundation of our course through life. His message may be still, but it is clear and will reach our hearts. His message is the gospel of joy, hope, courage, truth, love, and of miracles.

Focus on What Matters Most

On a dark December night in 1972, a Lockheed 1011 jumbo jet crashed into the Florida Everglades, killing over 100 people. This terrible accident was one of the deadliest crashes in the history of the United States.

A curious thing about this accident is that all vital parts and systems of the airplane were functioning perfectly—the plane could have easily landed safely at its destination in Miami, only 20 miles (32 kilometers) away. During the final approach, however, the crew noticed that one green light had failed to illuminate—a light that indicates whether or not the nose landing gear has extended successfully. The pilots discontinued the approach, set the aircraft into a circling holding pattern over the pitch-black Everglades, and turned their attention toward investigating the problem.

They became so preoccupied with their search that they failed to realize the plane was gradually descending closer and closer toward the dark swamp below. By the time someone noticed what was happening, it was too late to avoid the disaster.

After the accident, investigators tried to determine the cause. The landing gear had indeed lowered properly. The plane was in perfect mechanical condition. Everything was working properly—all except one thing: a single burned-out lightbulb. That tiny bulb—worth about 20 cents—started
the chain of events that ultimately led to the tragic death of over 100 people.

Of course, the malfunctioning lightbulb didn’t cause the accident; it happened because the crew placed its focus on something that seemed to matter at the moment while losing sight of what mattered most.

We know what matters most in life—the Light of Christ teaches this to everyone. We as faithful Latter-day Saints have the Holy Ghost as a “constant companion” to teach us the things of eternal value (D&C 121:46).

During my training to become an airline captain, I had to learn how to navigate an airplane over long distances. Flights over huge oceans, crossing extensive deserts, and connecting continents need careful planning to ensure a safe arrival at the destination. Some of these nonstop flights can last beyond 14 hours and cover more than 9,000 miles.

Satan wants us to think that when we have sinned we have gone past a “point of safe return”—that it is too late to change our course.

In our beautiful but also troubled world, it is a sad reality that this attitude is the source of great sorrow, grief, and distress to families, marriages, and individuals.

Satan tries to counterfeit the work of God, and by doing this he may deceive many. To make us lose hope, feel miserable like himself, and believe that we are beyond forgiveness, Satan might even misuse words from the scriptures that emphasize the justice of God, in order to imply that there is no mercy.

The gift and sacrifice of our Savior guarantee that there never needs to be a “point of no return” in our spiritual life. Our loving Heavenly Father offered His Son to always keep open the gate for a safe return if we only walk through it by using true repentance and receiving the miracle of forgiveness.

Lead image from the book

Elder Uchtdorf’s ability to draw on real-life experience and share easily interpreted analogies has endeared him to Church members the world over. Read more of his inspiring airplane-gospel analogies in his new book, The Gospel at 30,000 Feet. Available at Deseret Book stores and on deseretbook.com.