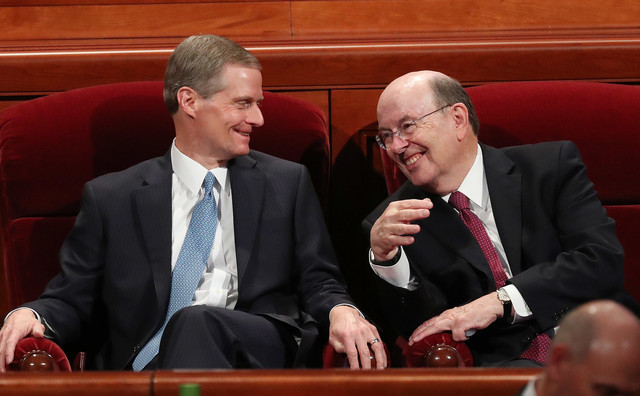 Latter-day Saints from all over the world tuned in to general conference last weekend and were spiritually fed by the words of our prophet and Church leaders.

People turned to Twitter to share their thoughts on the messages and their responses were inspiring, thoughtful, and hilarious. Here are some of our favorites.

1. The new block schedule might be confusing for a while:

Trust in the Lord. God never writes a check that he can't cash. //For those who are too young to know what checks are... When God says he will venmo you money he does. #LDSconf #ElderRasband— Sistas in Zion (@SISTASinZION) October 6, 2018

3. When Elder Uchtdorf called himself a "German shepherd":

4. The choir member who was just happy to be there:

President Nelson: Yeah so, pretty big changes coming next conference, just a heads up that it might be kinda hard to get your talk to stand out

Elder Bednar: *signs up for a graphic design class*#GeneralConference #LdsConf

that was the joke i was saving for #generalconference#ldsconf— poetic kate (@poetickate) October 6, 2018

8. How does everyone end up with the same one?

Still waiting on the #ldsconf announcement that makes it a sin to keep having the exact same navy blue suit with floral ties for every Utah wedding— and I’m BLAKE the Pumpkin Proletariat (@BLymanWarrior) October 7, 2018

9. A great response for when someone asks if you're "Mormon":

Me: “People keep asking me that, but I don’t see the resemblance.” pic.twitter.com/WBoZP4bDU4— Hank R. Smith (@hankrsmith) October 7, 2018

Not going to lie, as a digital marketer, having President Nelson use the term "Search Engine Optimization" during #generalconference just warmed my heart. 😂😂😂 pic.twitter.com/xzefKdWxoG

11. Addressing the effects of the 10-day social media fast:

Mormon women fasting from social media for 10 days, every recipe site is gonna wonder why nobody is liking and sharing their casserole recipes. Pinterest might shut down. #LDSconf #PresidentNelson— Sistas in Zion (@SISTASinZION) October 7, 2018

12. Everyone got excited when President Nelson started talking about temples:

13. We'll be patiently waiting for the new home-centered gospel study:

14. Me listening to almost every talk this conference:

15. They must feel relieved after the Sunday afternoon session ends:

I always imagine this at the end of #GeneralConference #ldsconf pic.twitter.com/bpqe3NrMGx

16. Is it even conference weekend if cinnamon rolls aren't involved?

17. What a beautiful talk given by Elder Holland:

THANK YOU FOR POINTING OUT THAT YOU ARE STILL ALLOWED TO FEEL PAIN AND YOU DONT HAVE TO BE IN A TOXIC RELATIONSHIP#generalconference— poetic kate (@poetickate) October 7, 2018

18. I don't think the German shepherd tweets will ever get old:

im getting a german shepherd and naming it dieter

19. This is actually pretty accurate:

21. No wonder conference makes me hungry!

The flesh is weak. All I can think about is...

22. This quote is so important:

“IF YOUR AGENCY HAS BEEN VIOLATED YOU ARE NOT OFF THE PATH, YOU ARE A VICTIM.” Hallelujah and amen. #ldsconf #generalconference— 🦊 “Spooky” Mulder (@MunchkinMerlin) October 7, 2018

23. You can use the correction of the name of the Church to share the gospel:

“Nope, he died along time ago. Want to read his book?”#GeneralConference— Hank R. Smith (@hankrsmith) October 7, 2018

24. Things can get a little crazy toward the end of the Sunday afternoon session:

That it. I’ve lost them. The 4 year old is building w blocks & knocking them over loudly with a ‘hiya!’ & the teens are violently throwing candy at each other. #everytime #generalconference #ldsconf #🤦🏽‍♀️ #momlife— Ang (@stuckinthetundr) October 7, 2018

25. The worst kind of punishment, honestly:

#ElderRenlund looks like the worse punishment he gave his kids was to sit them down, stare deep into their eyes, and softly and sadly say "I'm disappointed in your actions." #ldsconf #generalconference

26. President Eyring waving to the crowd is so sweet:

If Mormons take a “social media fast” but don’t announce it first on social media, did it really happen?

30. Everyone's a little nervous (but mostly excited) about their new responsibilities:

Those of us whose current family home evenings end in tantrums, tears, yelling, and somebody getting grounded are a little nervous... but we trust you Lord, we're gonna give this new #homeschoolchurch a chance. #LDSconf

31. What do you do during the prayers?

Classic dilemma of what to do during these televised prayers. #ldsconf— C. Bruce Hilton (@TheConorHilton) October 7, 2018

President Nelson called for a 10 day fast from any media that brings negative thoughts into my mind so ya GOODBYE Learning Suite— Hailey Skinner (@HaileySkinner) October 7, 2018

34. We went to church for three hours and walked up hill both ways in the snow:

Me Talking to My Future Grandkids: "We used to go to Church for 3 hours."
My Grandkids: #GeneralConference pic.twitter.com/dnq3vYeZoP— Austin Jones (@austinpjones91) October 6, 2018

U GUYS!! I KNEW HE WAS SUPERMAN. ❤️I CAN SEE PAST THOSE CLARK KENT GLASSES #ElderHolland #Generalconference pic.twitter.com/XY3nO01DOJ