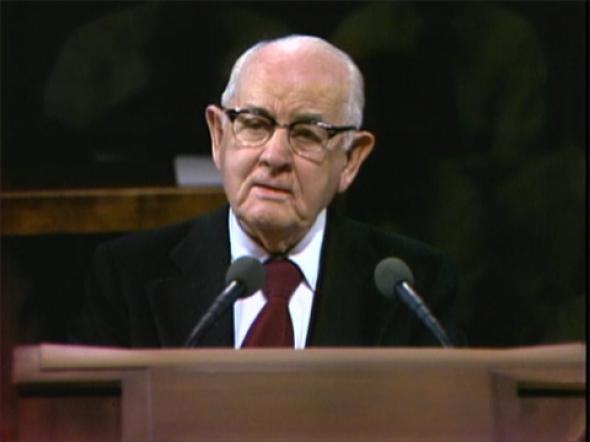 4 Hilarious Stories from Prophets and Apostles About Growing Older

President J. Reuben Clark, age eighty-three, said to the students at BYU, “Recently some students who were questioned reported they felt anyone past teenage was ancient. That set me to thinking and I suppose that, the post-teenagers being ancients, I am not only antediluvian . . . , but I am likewise prehistoric. . . . I shrink from the final step—that I am a fossil” (Speeches of the Year, 20 Apr. 1954).

Spencer W. Kimball once attended an area conference where the local leader offered thanks that the president was well enough to attend, praying that he would “die in the saddle.” The next day at the Church ranch, someone suggested that the Kimballs go horseback riding. President Kimball replied, “I don’t know whether I want to or not” (Kimball, “Spencer W. Kimball,” BYU Studies 25[4]: 69).

► You'll also like  6 of the Funniest Moments in General Conference

Elder Hugh B. Brown told about having his grandson on his knee. The boy felt the wrinkles on his grandfather’s face, looked at his white hair, and asked, “Grandpa Brown, were you on Noah’s ark?”

President Marion G. Romney’s good-humored love for his wife Ida was manifested in many ways. He delighted in telling of her hearing loss. Once he tried to get Ida to go to her doctor for a hearing check-up, but she didn’t think she needed one. Convinced that there was a problem, but not being able to convince Ida, he finally decided to go see her doctor himself and consult about what should be done.

President Romney explained, “He asked me how bad it was, and I said I didn’t know. He told me to go home and find out. The doctor instructed me to go into a far room and speak to her. Then I should move nearer and nearer until she did hear.” In this way he could learn how bad the hearing loss was. President Romney went home to try his experiment.

“Following the doctor’s instructions, I spoke to her from the bedroom while she was in the kitchen—no answer. I moved nearer and spoke again—no answer. So I went right up to the door of the kitchen and said, ‘Ida, can you hear me?’

► You'll also like: You'll Know You're Getting Older When These 10 Things Happen at Church

If you long to ease your nervousness at the beginning of your talk but aren't known as the ward comedian, this book is heaven-sent. Best-Loved Humor Of The LDS People is filled with excerpts from speeches, books, recordings, histories, and periodicals, this book features appropriate humorous pieces to add to any talk or lesson.