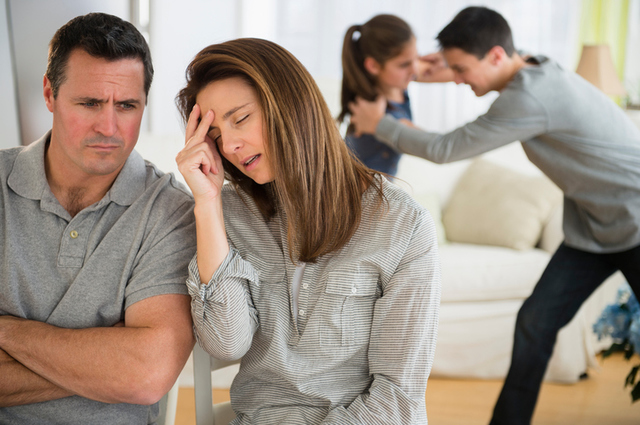 4 Imperfect Book of Mormon Families We Can All Relate To

It was easy to go to sacrament meeting, look around at the congregation, and pick out the families that had it all together. The parents were always dressed to the nines in their Sunday best. They would never have a child who didn’t show up to church, never have a son skip Sunday school, or a daughter who threatened to run away.

Even though I loved my family, I’d watch these “perfect” families and wonder why mine was different. My parents held Family Home Evening every week, we were praying together night and morning, and our scripture study was consistent. Why, then, did my mom still wait up late at night on the weekends, sick with worry about a child who broke their curfew? Why did my siblings sometimes struggle with their testimonies or their attitudes about church? Why wasn’t my family the perfect Mormon family?

I have asked that question a lot throughout my life as I’ve watched immediate and extended family members make poor choices or struggle with various weaknesses. The answer, I’ve come to discover, is that the perfect Mormon family does not exist—not even in The Book of Mormon. Almost every scriptural family, including that of prophets, had its own kind of problems. The following are just a few examples. In a way, their stories can bring us comfort and strength when we feel our own families fall short.

From the outset of The Book of Mormon, we are presented with a family that seems to be doing everything right. Lehi is not only a father, but a prophet, and Sariah loves her children dearly. As parents, they serve the Lord diligently, and according to Nephi, they are “goodly” (1 Nephi 1:1). It’s easy to imagine that if Lehi’s family lived today, they would be holding FHE every week and taking dinner to the neighbors on a regular basis. Nephi and Sam would be those kids who show up to every mutual activity. Lehi might be the bishop, Sariah the Relief Society president. They’d be the most respected family in the ward.

But they probably wouldn’t be that family with every seat on their pew filled.

In spite of obediently following all of the Lord’s commandments, Lehi and Sariah lost their two eldest sons, Laman and Lemuel, to sin. The children they would have held in their arms and loved first not only chose to fall away, but they chose to hate their own family, to even wish their brother and father dead. Can you imagine the pain their parents would have felt? I’m sure Lehi and Sariah questioned the Lord many times, spent many a sleepless night wondering why doing everything right had still not prevented their sons from rebelling.

Maybe they felt like lousy parents and blamed the choices of their sons on themselves. Maybe they occasionally felt that their sons would have remained in their lives had they remained in Jerusalem. What they couldn’t have comprehended, however, is the scope of their example and the gift that would become to generations of righteous children and grandchildren to come. Even you and I are blessed today because of the sacrifices of these two parents.

When we think of spiritual powerhouses in The Book of Mormon, Alma the Younger’s companion Amulek might come to mind. Amulek was a well-known and well-respected man in his community before Alma arrived. He had a good reputation and was wealthy, owning gold, silver, and many precious things (Alma 15:16). After an angel appeared to him in a vision and told him he would feed and care for the prophet Alma, however, Amulek’s entire life changed.

At first, Alma’s arrival was a great boon for Amulek, as “he hath blessed me, and my women, and my children, and my father and my kinsfolk; yea, even all my kindred hath he blessed, and the blessing of the Lord hath rested upon us” (Alma 10:11). Amulek would go on to preach valiantly and powerfully alongside Alma as one of the greatest mission companions in the scriptures. No prison could hold them; no man could hurt them. They were unstoppable.

In one of the most heartbreaking and easily overlooked moments in the scriptures, we see Amulek “rejected by those who were once his friends and also by his father and his kindred.” (Alma 15:16). Somewhere along the way, in the midst of his conversion and dedication to sharing the gospel, Amulek lost the support of those he loved dearly. Without any explanation, they pushed him out of their lives. And yet, he carried on. He, like Lehi and Sariah, became one of the greatest spiritual examples in the scriptures, loved and supported by the Lord and capable, even without the support of his family.

It’s easy to think of Alma the Younger as the rebellious son who turned his life around, but I think we tend to overlook Alma the Younger as a father who cared deeply about the spiritual well-being of his sons and maybe felt somewhat inadequate, particularly when it came to his son Corianton.

Corianton is usually remembered for one thing: following after the harlot Isabel. He is the wayward son and the troubled kid that Young Men leaders would have had no idea how to deal with. I wonder how many times Alma paced the floor, frustrated, wondering, “Why can’t you just be like Helaman and Shiblon? What did I do wrong?” Maybe, privately and painfully, he wondered, “Why did he have to be just like I was at that age, Lord? Why did he have to make the same mistakes?”

The beautiful thing about Alma is that, like Alma the Elder, he didn’t give up on his son, and Corianton, for as many wrong choices as he made, still had the capacity and willingness to change. From Alma 39 to 42, we see one of the most beautiful testimonies of the Atonement given by Alma to his son as a means to teach him, and at the very end of that testimony is the promising note that Corianton is “called of God to preach the word unto this people” (Alma 42:31). We never really see Corianton in the scriptures again, but we do read that “the sons of Alma did go forth among the people, to declare the word unto them” (Alma 43:1). I like to think that a changed and repentant Corianton was among them.

One of the most alarming family dynamics in The Book of Mormon emerges with the story of King Lamoni and his father. Picture Lamoni and Ammon on a road leading to Middoni, Lamoni’s angry father running into them and demanding to know why his son was hanging out with this loser named Ammon. I’d imagine that Lamoni was defensive and very nervous to share his experiences with his father, a feeling that was justified after the man attempted to take Lamoni’s life and then Ammon’s.

Lamoni's father nearly lost his son in a fit of rage, valuing his pride over the well-being of his child. It’s a frightening moment in scripture when contrasted with the love fathers like Alma and Lehi had for their children.

In time, however, we see Lamoni’s parents undergo the same spiritual transformation as their son, and a lot of that is due to the examples of Lamoni and his friends. Lamoni’s father even goes on to help organize the Anti-Nephi-Lehies, one of the most righteous groups in the entire Book of Mormon. It’s a remarkable account of an imperfect family that turns itself around, one that can give us hope.

A Perfect Source of Hope

Now, whenever I visit my home ward and take a look at the congregation, I don’t see perfect families. I see spouses that are struggling to communicate better, parents that worry about their kids, single mothers or fathers trying to make do, and teens whose parents are still learning how to parent them. The beautiful thing is that none of them are lost causes.

With the transformative power of the Atonement and the gospel of Jesus Christ, miraculous things can and do happen through imperfect families. They happen every single day, sometimes unexpectedly and sometimes after long periods of time. The key is to hold on and have faith that God will make weak things strong. Our families are no exception to that.

Arianna Rees is a featured contributor for LDS Living. She's a recent Utah State graduate with a Bachelor's degree in English who loves reading, writing, and adventuring more than just about anything--excepting her family and the Gospel, of course. She can most often be found bushwhacking in the mountains, scouring Deseret Industries for classy shoes, or jamming out to a Beyonce song in the privacy of her bedroom.

Arianna is also a blogger and author of the popular LDS posts 5 Things You Should Know Before Going Through the Temple, 9 Conference Moments No One Saw Coming, and Why I Took Returned Missionary off My Checklist. Read more from her at igobyari.blogspot.com or find her on Facebook.