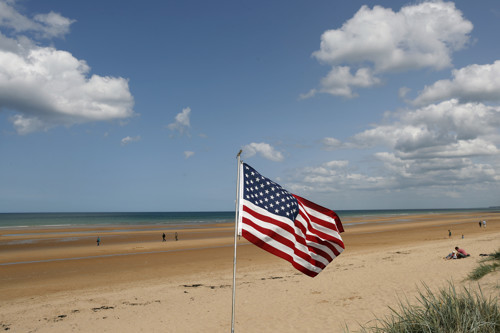 4 Latter-day Saint Servicemen and Their Experiences on D-Day

Editorial note: The following article includes quotes that include graphic descriptions of war.

On June 6, 1944, D-Day, Allied Forces invaded France. Many willingly gave their lives in the fight against tyranny and evil, in defense of freedom. Their sacrifice reminds us we too need to defend the ever-fragile, God-given liberties we enjoy today.

The initial predictions were ominous: foul weather over the English Channel and 60 miles of beaches on France’s Normandy coast, 75 years ago today, June 6, 1944.

As torrential rain rattled his headquarters’ windowpanes in Southwick, England, on June 5, Gen. Dwight D. Eisenhower, supreme commander of the WWII Allied Expeditionary Forces in Europe, sat with his senior commanders. Four were asked to advise whether to postpone or initiate D-Day, the Allied invasion of Western Europe. A successful foothold on French beaches wouldn’t end the war but would turn the tide of the European theater, and eventually force the surrender of Hitler and his European minions.

Allied success would be costly — especially in human lives — but failure could prove disastrous.

Two favored and two opposed launching June 6. The decision was left — as it always had been — wholly in Eisenhower's hands. After nearly five minutes of silence, he quietly announced and was reported in Michael Korda's “Ike at D-Day” in the Smithsonian magazine's December 2007 issue, “I am positive we must give the order. … I don’t like it, but there it is. … I don’t see how we can do anything else.”i

At the time, some 3,000,000 Allied soldiers were under Eisenhower’s command, according to “Ike at D-Day.”ii Poised to go, or already on the treacherous seas, were 176,475 soldiers, 20,111 vehicles, 1,500 tanks, mobile docks, and 12,000 ready-to-fly planes. It was the greatest seaborne armada in history, and nothing in war requires more sophistication, planning, coordination, and, some might say, "just plain luck" or “divine intervention,” to succeed.

So it was that on June 6, Eisenhower radioed troops of the beginning of “the Great Crusade, toward which we have striven these many months. … The hopes and prayers of liberty-loving people everywhere march with you. … Your task will not be an easy one. Your enemy is … battle-hardened … (and) will fight savagely. … I have full confidence in your courage, devotion to duty and skill in battle. … Nothing less than victory! ... and let us all beseech the blessing of Almighty God upon this great and noble undertaking” (see the full document on the National Archives website at www.archives.gov). iii

Both the Allied and Axis juggernauts knew the invasion was coming and had spent months preparing. However, Axis troops were spread thin, their leaders uncertain exactly where the attack would take place. Additionally, Allied weather aircraft had detected a high-pressure front portending decreased winds, and gradual clearing over the channel and invasion beaches from the evening, June 5, through early morning, June 6. Luftwaffe planes, however — unable to patrol beyond Iceland — forecast abysmal weather going beyond June 6.

Certain the Allies wouldn’t attack under what he was informed were abysmal conditions, German field marshal Gerd von Rundstedt, his staff, and other Axis commanders left on an inspection tour or for R&R. Hitler vacationed to Berchtesgaden. The best German military minds, tasked with forestalling the invasion, were far from Normandy on June 6.

Knowing none of this, Eisenhower, after giving the go-ahead on June 5, and aware of the enormous perils ahead — sat down, penned a statement, and stuck it in his pocket should the invasion fail as reported in “Ike at D-Day”: “Our landings in the (Normandy) area have failed. … My decision to attack … was based upon the best information available. The troops, the air, and the Navy did all that bravery and devotion to duty could do. If any blame or fault attaches to the attempt it is mine alone.”iv

Then, knowing of predicted 80 percent casualty rates among airborne troops to be dropped that night behind enemy lines, he visited them. The unexpected arrival of “Good old Ike,” reported his driver Kay Summersby and as noted in “Ike at D-Day,” had “(the soldiers going) crazy — the roar was unbelievable!. ... He spoke a few words to every man … shook his hand … looked (him) in the eye (and) … wished him success. ‘It’s very hard really to look a soldier in the eye,’ he told (Kay) later, ‘when you fear that you are sending him to his death.”v

Meanwhile — with toilets backed up and vomiting their way across jagged seas — seaborne troops finally clamored into tiny, open Higgins boats and headed for one of five D-Day beaches: Utah, Omaha, Gold, Juno or Sword. Omaha proved to be the bloodiest, where roughly 2,400 U.S. troops died, were wounded or went missing.

Serviceman Alfred W. Beeler, a member of The Church of Jesus Christ of Latter-day Saints, remembered, “climb(ing) overboard on a rope net (to leap into a) landing craft far below. It was a real trick. … As the craft rose on the crest of a wave we had (a split second) to step into the craft. … If men missed … and fell into the water, they were lost at sea.”vi

His is one of several experiences compiled by Robert C. Freeman and Dennis A. Wright in Saints at War: Experiences of Latter-day Saints in World War II. Here are a few others:

Melvin D. Barney recalled in Saints at War armor-piercing shells hitting his landing craft, leaving the man next to him headless. The shell continued and “hit (another) in the chest (and) … tore him completely in two.”vii

H. Wendell Jones had to carry an 85-pound radio onto the beach. Hit with shrapnel, he continued on, and “next morning I returned to the beach with Colonel Canham. (It) was covered with bodies of dead and wounded soldiers, some whose legs had been blown off but were still alive. Everywhere I looked, I saw bodies of American soldiers, … hundreds … so many it was almost impossible to take a step without having to step over someone.”So many dead, they were hauled off in racks on 2-ton trucks for the next three days.

Don S. Brimhall remembered being “sitting ducks for the large German coastal guns, and their fighter-bombers. … Landing craft and ships were on fire and sinking, aircraft were being shot out of the sky, dead bodies were floating on the high tides, and … oil from sinking craft was burning on the water creating dense, black smoke. … Wave after wave of American troops lost their lives on the initial landing on Omaha Beach. … Thousands of young men sacrificed their lives for the cause of freedom.”x

Every surviving soldier that day had a story to tell, and for many, much they wanted to forget. Many wondered why some lived and some died, yet, as Brimhall stated in Saints at War, many felt protected by “Father in Heaven. … Throughout my years in combat my prayers were answered. I shall always be grateful for His protection and the blessings he has given me.”xi

Thousands gave their lives 75 years ago today that millions might live as free women and men. Their willingness to do their duty and to die stands as a remarkable example and reminder that we too need to defend the ever-fragile, God-given freedom and liberties we enjoy today.

Lead image by Thibault Camus, Associated Press: An American flag is placed in the sand of Omaha beach, in Normandy, France, Monday, June 3, 2019. France is preparing to mark the 75th anniversary of the D-Day invasion which took place on June 6, 1944.

Kristine Frederickson writes on topics that affect members of The Church of Jesus Christ of Latter-day Saints worldwide. She teaches part-time at BYU. Her views are her own. Email: kfrederickson.desnews@gmail.com 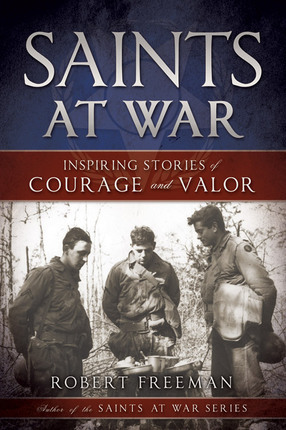 Read or listen to more remarkable accounts of Latter-day Saints who served in World War II with the DVD or the book Saints at War.