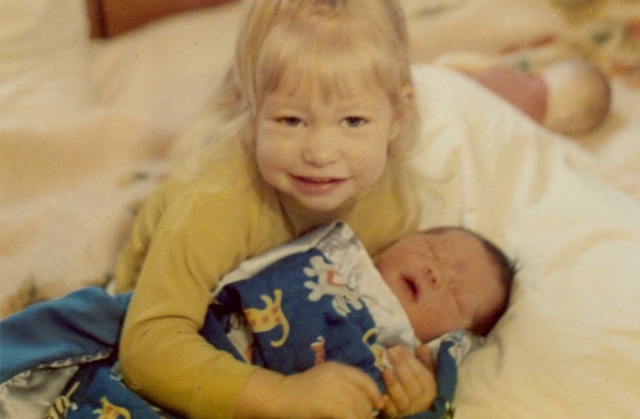 4 Lessons of Hope I Learned from My Sister's Suicide

Meggan took her own life in our parents’ backyard. There was no more hiding from suicide.

It was my mom’s birthday. We finished the cake and presents, the candles and congratulations, and topped off a peaceful, lovely day of celebrating her life. After the festivities, everyone headed toward their individual rooms and settled down for the night. I went upstairs and turned out the lights, thinking I was the last until I heard movement in the kitchen and the sound of a door handle. I found my stepdad, Daddy Jim, coming in from the garage and knew instantly that something was wrong. It was like a bowling ball smashed into my heart, then fell with a thud to my stomach. “Dad?” I asked. “Dad? Dad?”

“He walked so slowly to me. It felt more like we were swimming toward each other through the thick kitchen air. Then he said, “Ben called; there has been an accident.”

I remember screaming, knowing already. “No! No, Dad! Bring her back! No, is she dead? Is it Meg?” But I didn’t need to ask. I already knew. He gently hugged me. “Yes, Meg’s gone. We can’t bring her back.”

I started to plead with my dad and with God, as if my words would make it change. “I want her back. Make her come back, please!”

Grief is hard no matter the loss, and I do not minimize anyone’s pain, but suicide is a grief all its own. No matter how you try, you can’t hide from the monster web of emotions, the tangled knot of questions. It can’t be avoided, downplayed, or minimized. It knocks the wind, and sometimes even the faith, out of the strongest of God’s disciples.

Latter-day Saints know the great plan of happiness. We believe in the power of the priesthood and the grace of the Atonement. But no matter what our faith has taught us, we still hurt. The plan of happiness doesn’t stop us from experiencing deep loss or grief while in mortality, but some falsely believe that grief won’t be as deep because we have the plan.

Meg’s passing was not my first experience with death. However, I questioned, and still do at times, “Why am I still hurting?” So when Meg’s suicide left me with a big, messy hurt that demanded to be mourned, I didn’t quite know what to do. I wanted to go through the steps of grief orderly, like I had done with previous losses.

But suicide was different.

I am in no way claiming that the grief experienced because of death from cancer, accidents, age, or war are less sorrowful or painful for loved ones left behind. Grief and loss can’t be measured against a yardstick or weighed on a scale.

Yet, a different sick feeling comes when we hear or read the word suicide. Through the weeks and months following Meg’s death, I have attempted to observe my own grief and learn from it, instead of being drowned by it.

My intent in sharing these observations is to help those left behind. Friends or family may understand more sensitively what someone touched by suicide is experiencing in the confusing aftermath.

After my sister’s death, I was frequently asked the question, “What happened?” The danger of this question is that it really can’t be answered. This process can haunt those who are left behind for many years. “What happened?” leads to “Why?” which leads to “What more could I have done to save them?” We don’t ask if we could have stopped a heart attack or healed cancer, but it is easy to play the “what if" game when someone we love deals with mental illness. I went over and over in my mind, what if I could have talked to her that day? What if I had visited her more? What if we had fasted again for her healing or had more faith? Would any of that have saved her? These questions can add intensity and years to the process of grief. The truth is that answers only come from God. He knows the hearts of those that suffer, the ones that take their lives, and the ones that try to survive the suffering.

Incredible grief leads to never-ending questions that only Father in Heaven, who holds the stars in the heavens in balance, can ultimately answer. Remember that some answers and understanding will not come until the next life.

Outward behaviors of suicide victims often hide the pain they feel from their mental illness. Suicidal individuals feel permanently paralyzed by their perceived brokenness. We never know what extreme, private battles even the most capable and beautiful person is fighting.

The gift that came from Meg’s suicide was the realization that I had broken parts, but that I was not broken and worthless. I accepted that Meg had broken parts, but I wanted her alive anyway and with me always. Even so, I still struggled to accept my own imperfections. I wanted to hide them from God and from everyone. As a child, I falsely believed that if I was perfect and never made a mistake that the people I loved wouldn’t be hurt or hurt me. But that isn’t true.

I saw all Meg’s goodness and her flaws. And I would still have chosen her life, over death, every time.

Elder Jeffrey R. Holland testifies, “Broken minds can be healed just the way broken bones and broken hearts are healed. While God is at work making those repairs, the rest of us can help by being merciful, nonjudgmental, and kind” (“Like a Broken Vessel,” Jeffrey R. Holland, LDS General Conference, April 2013).

Just say the word suicide and people begin squirming. Some falsely believe that a person who commits suicide may be lost for eternity, damned. The Church’s statement on suicide says:

Although it is wrong to take one's own life, a person who commits suicide may not be responsible for his or her acts. Only God can judge such a matter. Elder M. Russell Ballard of the Quorum of the Twelve Apostles has said: “Obviously, we do not know the full circumstances surrounding every suicide. Only the Lord knows all the details, and he it is who will judge our actions here on earth. When he does judge us, I feel he will take all things into consideration: our genetic and chemical makeup, our mental state, our intellectual capacity, the teachings we have received, the traditions of our fathers, our health, and so forth (“Suicide: Some Things We Know, and Some We Do Not,” Ensign, Oct. 1987, 8).

In many situations over the past year, I have tried to share my own understanding of and journey with this different kind of grief. Suicide is about a final choice and doesn’t represent all the choices of our lost loved one. As I wept by Meg’s lifeless body, I saw so clearly that her entire life and the many good choices she had made allowed her to die with a current temple recommend. Suicide was about her final choice on earth, not the sum total of all she’d done. She had made countless good choices, but only one final choice that had ended her mortal mission.

The truth for those in mourning is that suffering doesn’t make you weak. Those that end their lives have often battled decades of darkness.

Offer tender compassion and prayers to someone that has been touched by suicide. Be willing to talk about their loss and the loved one who is gone. We sometimes know a loved one is suicidal and often times we don’t. Regardless of the specific details, help them remove the shame and simply feel sad.

You can find healing after a loved one’s suicide.

Our Father in Heaven knew that life would be filled with joy and pain. So He mercifully sent us His Son, a Savior to atone for the hurt and healing of all of His children. The grief of suicide may be a different kind of grief than I have ever experienced, but I believe the source of healing is the same.

Hope and healing comes in the eternal Atonement. One scripture that has brought me great comfort, shared by a friend the night we found Meg’s body, is Mosiah 3:11: “For behold, and also his blood atoneth for the sins of those who have fallen by the transgression of Adam, who have died not knowing the will of God concerning them, or who have ignorantly sinned.”

Healing has and will come through priesthood power, prayer, and other people. I find hope of an eternal reunion with our loved ones when reading Elder Holland’s words:

There will come a day when loved ones whom we knew to have disabilities in mortality will stand before us glorified and grand, breathtakingly perfect in body and mind. What a thrilling moment that will be! I do not know whether we will be happier for ourselves that we have witnessed such a miracle or happier for them that they are fully perfect and finally “free at last.” Until that hour when Christ’s consummate gift is evident to us all, may we live by faith, hold fast to hope, and show “compassion one of another” (“Like a Broken Vessel,” Jeffrey R. Holland, LDS General Conference, April 2013). 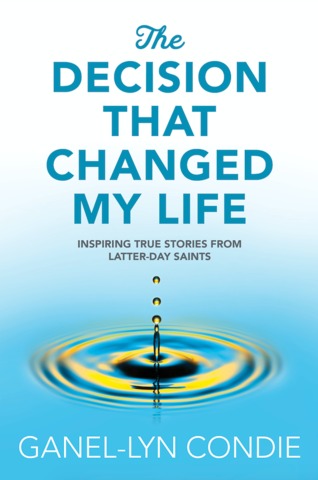 Whether making life-changing choices or considering seemingly small day-to-day decisions, to choose oftentimes means to take a step into the unknown. In The Decision That Changed My Life, author Ganel-Lyn Condie explores some of the life-altering choices made by sixteen notable and everyday Latter-day Saints and the chain of events that followed those decisions that affected other people's lives. From the broad impact of Janice Kapp Perry's course-changing decision to pursue music to the significance of Chris Carter's converting to the gospel as a young boy, each story demonstrates the potential ripple effects of our decisions. 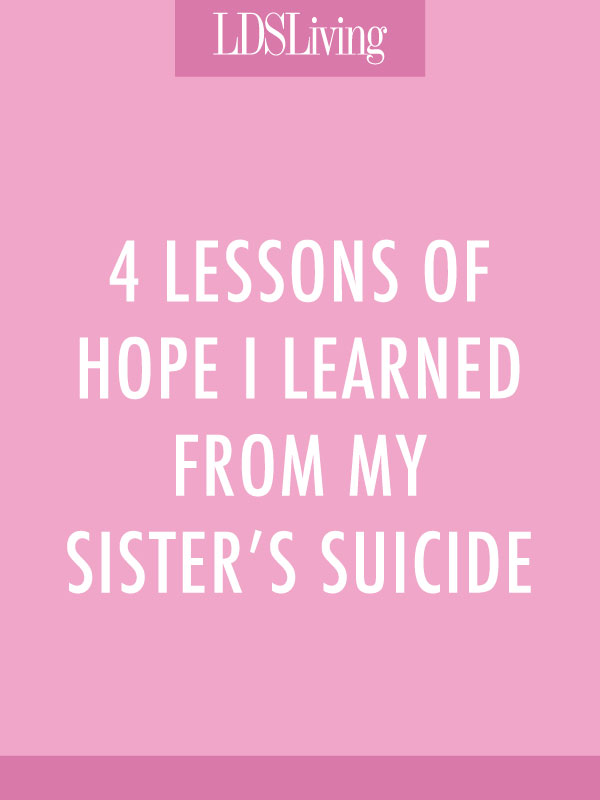