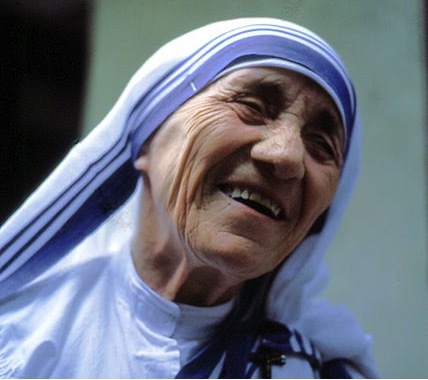 On September 4, Mother Teresa was declared a saint in a canonization Mass held by Pope Francis in the Vatican. This humble and selfless nun dedicated her life to serving the poor and inspired millions around the world, including LDS Church leaders. Here are four times they mentioned her in their talks.

1. Elder Jeffrey R. Holland, "Are We All Not Beggars?"

A journalist once questioned Mother Teresa of Calcutta about her hopeless task of rescuing the destitute in that city. He said that, statistically speaking, she was accomplishing absolutely nothing. This remarkable little woman shot back that her work was about love, not statistics. Notwithstanding the staggering number beyond her reach, she said she could keep the commandment to love God and her neighbor by serving those within her reach with whatever resources she had. “What we do is nothing but a drop in the ocean,” she would say on another occasion. “But if we didn’t do it, the ocean would be one drop less [than it is].” Soberly, the journalist concluded that Christianity is obviously not a statistical endeavor. He reasoned that if there would be more joy in heaven over one sinner who repents than over the ninety and nine who need no repentance, then apparently God is not overly preoccupied with percentages.

In a 1953 letter, Mother Teresa wrote: “Please pray specially for me that I may not spoil His work and that Our Lord may show Himself—for there is such terrible darkness within me, as if everything was dead. It has been like this more or less from the time I started ‘the work.’ Ask Our Lord to give me courage.”

Archbishop Périer responded: “God guides you, dear Mother; you are not so much in the dark as you think. The path to be followed may not always be clear at once. Pray for light; do not decide too quickly, listen to what others have to say, consider their reasons. You will always find something to help you. … Guided by faith, by prayer, and by reason with a right intention, you have enough.”

My friend thought if Mother Teresa could live her religion without all the answers and without a feeling of clarity in all things, maybe she could too. She could take one simple step forward in faith—and then another. She could focus on the truths she did believe and let those truths fill her mind and heart.

3. Elder David B. Haight, "By Their Fruits Ye Shall Know Them"

This year’s Nobel Prize was given to India’s seventy-year-old Mother Teresa of Calcutta, who ministers to the “poorest of the poor”—India’s homeless beggars, sick, and dying, many of whom live their whole lives on city sidewalks, eating what they can find from garbage cans and sleeping in doorways. Mother Teresa herself lives in absolute poverty, clothed in a white cotton sari, eating only the simple food prepared for the destitute. Her “Order of the Missionaries of Charity” now assists 70 schools, 258 clinics, 58 leprosy centers, 25 homes for abnormal children, and 25 homes for the dying. Mother Teresa says it is not how much we do, but the love we give that really matters. She refused the traditional Nobel Prize dinner, saying she would rather the money—several thousand dollars—be given to the poor.

When honored by the Calcutta Rotary Club, Mother Teresa said, “Now I am a Rotarian. If you join Rotary to say you are a Rotarian, and come for fellowship and a meal, don’t join. Become a Rotarian only if you are willing to serve until it hurts” (The Rotarian, Dec. 1980, p. 42).

Some time ago I read an essay referring to “metaphysical hunger” in the world. The author was suggesting that the souls of men and women were dying, so to speak, from lack of spiritual nourishment in our time. That phrase, “metaphysical hunger,” came back to me last month when I read the many richly deserved tributes paid to Mother Teresa of Calcutta. One correspondent recalled her saying that as severe and wrenching as physical hunger was in our day—something she spent virtually her entire life trying to alleviate—nevertheless, she believed that the absence of spiritual strength, the paucity of spiritual nutrition, was an even more terrible hunger in the modern world.