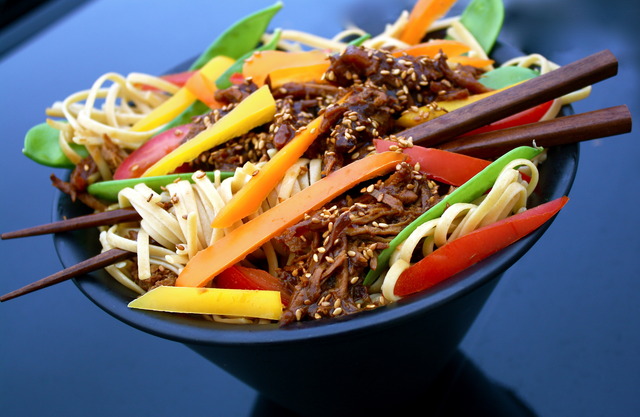 This slow-cooker dish makes wonderful leftovers, hot or cold. Fresh garlic and ginger strengthen the immune system and aid the body in fighting off winter colds. Look for a lean pork roast to reduce calories; I usually buy tenderloin.

1. Combine first seven ingredients and set aside. Place trimmed pork in a slow cooker and pour soy sauce mixture over meat to coat. Cook on low for 7–8 hours or on high for 4–5 hours until it easily pulls apart with a fork.

2. Just before serving, boil pasta according to package directions in a large pot, adding peppers and peas to boiling water during the last two minutes of cooking, being careful not to overcook veggies. Drain noodles and vegetables. Set aside.

3. Remove meat from slow cooker with a slotted spoon. Cool slightly and shred into medium-sized pieces. Strain cooking liquid (I use cheesecloth to remove any residual fat) and pour into a skillet, bringing to a boil until slightly thickened. Add shredded meat to liquid to reheat and serve with noodles and vegetables.

4. Garnish with toasted sesame seeds or chopped peanuts, if desired.
1-4