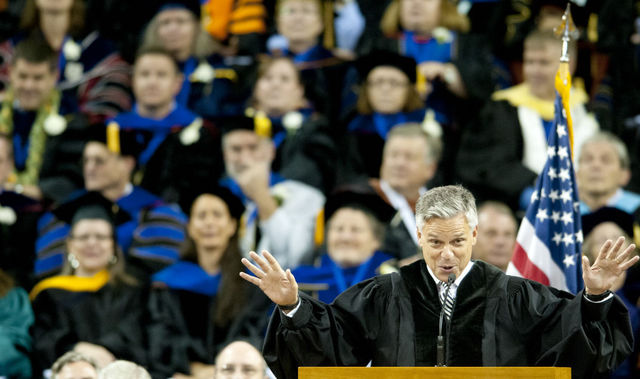 "A's" are not the sign of success, Huntsman said. Instead, these five "F's" brought him success in life.

- In his speech, Huntsman said his father's counsel to him while seeking a career was to become a businessman and only be a politician as a backup plan. He mused that his father also ignored the advice of his grandfather to become a teacher and only go into business as a backup plan. Ultimately, Huntsman said to ask yourself, not others, what you should do in life to find your own path.

- As President Monson so wisely counseled, "Don’t limit yourself and don’t let others convince you that you are limited in what you can do. Believe in yourself and then live so as to reach your possibilities."

- There will always be a need for the human touch, Huntsman said. As each generation faces its own set of difficulties, it is still important to find ways to contribute to society with something we are passionate about.

- David O. McKay once shared, "Find a purpose in life so big it will challenge every capacity to be at your best."

- Huntsman frankly joked about his run for the 2012 presidency, saying that he was a winner. But he mentioned that failure isn't trying and not succeeding. True failure is not learning from your mistakes.

- In October 1989, Gordon B. Hinckley shared, "Please don’t nag yourself with thoughts of failure. Do not set goals far beyond your capacity to achieve. Simply do what you can do, in the best way you know, and the Lord will accept of your effort."

- Huntsman shared the story of when his family went to China to visit the village where one of his daughters was born. He spoke of the love the caregivers who found his adopted daughter had for her, and that they still remembered her. He also spoke of the love of the mother of that daughter, who wanted her to be found and cared for. He said love is powerful enough to influence others despite differing backgrounds, races, and languages.

- Huntsman related a story of a man who was being held in a Chinese prison without any charges or convictions. He said the man, not knowing when he would get out, hoped that his children would learn to have goals finding wisdom and learning from the training grounds of experience. Huntsman admired this man who had everything taken from him but who still wished his children could finding meaning in their lives despite his absence.

- Though, like this man and his children, we might not be able to see our Heavenly Father for some time, we can have comfort knowing we need never be separated from Him. And, as Sister Cheryl A. Esplin shared, “it is the love of God and neighbor that gives meaning to life.”

Photo by John Zsiray from the Herald Journal