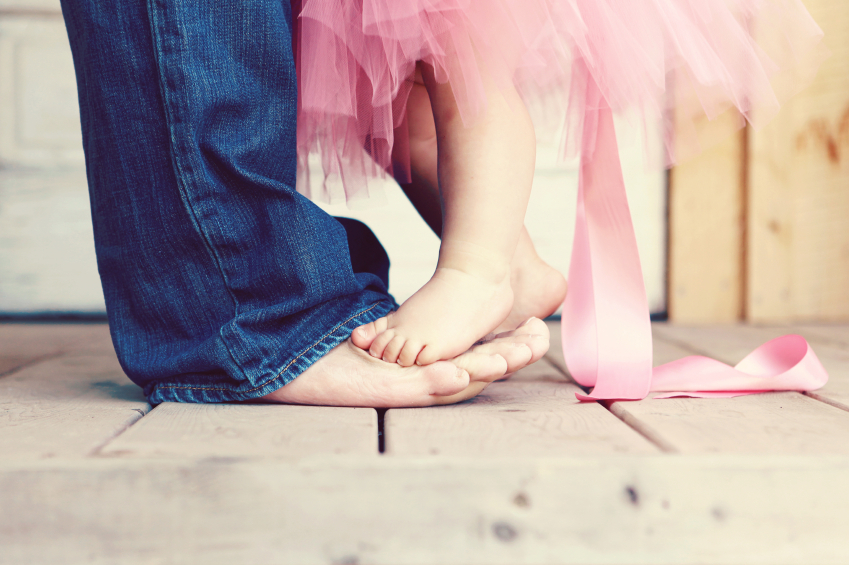 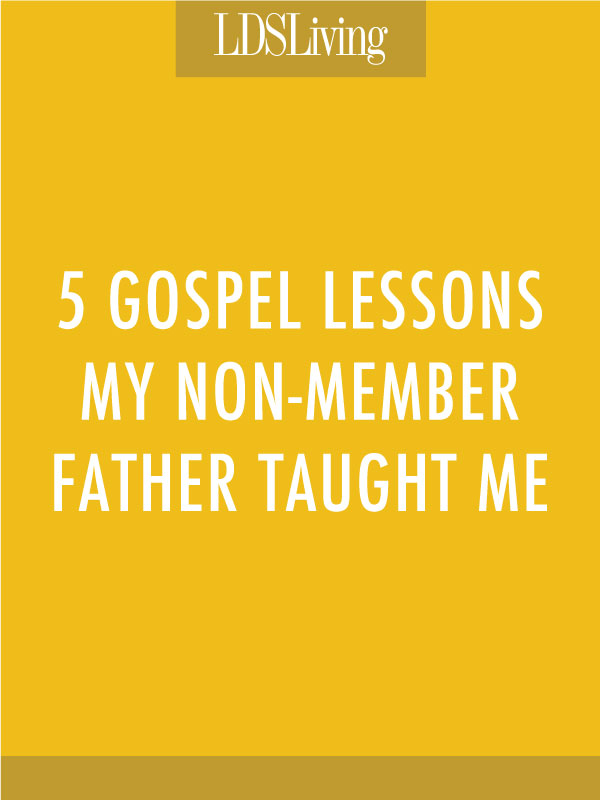 My dad wasn’t a member of the LDS church. In fact, I’m not sure he was actually a member of any church. He was, however, a man of great faith, who thought that all churches had some truth to them, and enjoyed listening to their various sermons. On any given Sunday, he might attend one or two different churches in our small town in upstate New York.

After I was baptized as a teenager, and as I began to understand gospel principles more fully, I could see that the life philosophy of my father had prepared me in many ways to not just accept the restored gospel, but to understand how to live it.

Before I ever read the scriptures or had heard of living prophets, I was learning the philosophy of my dad, and after all these years, the great lessons he taught me still guide my life.

Sit Quietly and the Answer Will Come to You

My father was a building contractor, and a mechanical engineer. He was also an optimistic, inventive man, who, after pondering a problem for a while, seemed to have the ability to see the solution in his mind. The fact that he didn’t know all the steps to get him from where he was to where he wanted to be never seemed to slow him down.

Dad would begin a project with what he knew, and then ask for the guidance and suggestions of others as he went along. He told us numerous times to “Just get going – you’ll find a way.”

One summer, my oldest sister was having trouble finding a summer job. She wanted to work in a hot dog stand, but all the jobs were taken, so Dad said he would build her a little stand. We thought he was thinking of a small little roadside stand, but we soon realized Dad wasn’t building a stand. Within a week, he had purchased an old run-down gas station and by late summer, Dad opened The Wagon Wheel Restaurant. This was no hot-dog stand—it was a steak house. The menu included steaks, barbecue chicken, hamburgers, cheeseburgers, hot dogs, homemade potato and macaroni salad, green salad, and delicious pies. There was nothing like it for miles around and it became a huge success.

I don’t think the fact that Dad had absolutely no experience in running a restaurant was ever a concern to him. He always believed that when he came across a problem he didn’t have the answer to that he just needed to sit quietly and think, and the answer would come to him, and he would eventually find a way.

I never realized at the time that Dad had been teaching me to sit quietly, and to listen for the Spirit to provide answers to my problems. To this day, when faced with a problem, my siblings and I have the same characteristic. It never occurs to us that there isn’t a solution to be found. We know if we sit quietly and think about the problem, the answer will come and we will find a way.

Learn to Live Your Life with What You Have

Just about one year after the restaurant opened, I lunged to kick a ball on the playground and felt a searing pain in my left hip. I could barely put my weight on it.  About a week later, my hip tore out of the socket, a result of what doctors would later describe as child-onset Perthes.

The next few years brought two hip surgeries and over three years of walking on crutches before it finally began to heal. After each surgery, as soon as I was up and about on crutches, there was, work to be done. I was expected to do my chores around the house and help out at the restaurant, just like my sisters.

I remember, during my long season on crutches, a time we went to visit my grandmother. We had just finished eating dinner and Dad asked me to get up and start clearing the table. When I got up, I made quite a production of trying to carry a few things into the kitchen on my crutches. After I left the dining room I heard my grandmother say, “Frank, you are too hard on that girl. You make her work as hard as the other girls—you shouldn’t expect so much from her. She’s been through a lot.” I couldn’t believe what I was hearing—Grandma was admonishing my Dad to not make me work so hard!

My father’s reply was the only time I ever heard him speak sharply to his mother. “Ma,” he said, “We don’t know how long she’s going to be like this, and she has to learn how to live her life with what she has.” Dad knew what he was talking about, as his own father had lost his right arm in an ensilage machine when my dad was just a toddler and Dad grew up watching his father run a large dairy farm with his left arm and a hook. He knew life could give us hard blows, but he also knew we were capable of doing hard things and expected us to do them.

I could not possibly have foreseen how Dad’s teachings and expectations were preparing me for the struggles, the surgeries, and at times, the misery that were ahead of me in my life. I had eight children, which included twin baby girls, when I faced my second total hip replacement. But having learned how to “live my life with what I had” as a young teenager, I knew that I could face all that was ahead of me and would be able to do whatever needed to be done. I also knew there would always be someone to help me, and there always was.

More from the author:

It was never in my life plans to write a book--the thought of it never occurred to me before that summer morning when ideas came repeatedly into my mind and I finally began to write them down. I was over sixty years old and knew nothing about writing a book, but that was not a concern. I just started writing, asking for guidance and suggestions as I went, and trusted that I would find a way.

I feel sure that Dad would be proud of me for tackling something I knew nothing about and went on to have two books published. But I’m not quite sure how he would feel that one of them is about him.

-->Learn more about The Song of My Father

I have wondered what my dad would think about Facebook, Twitter, and Instagram. He was not one to broadcast his feelings or activities. He taught us that if we were upset about something we should keep it to ourselves for a while, knowing that our feelings would probably change once we calmed down. If we were gossiping about one of our friends or their parents, he would caution us not to say such things, often adding, “Say nothing about this to others. You might not know the whole story.”

I remember a time when one of his workmen stole buckets of paint from a construction job. Dad was pretty sure he knew who took it but said nothing. A few weeks later, Dad showed up at the man’s house unannounced to drop something off. Sure enough, the interior of his home gleamed with a fresh coat of the missing paint. We could hear him in the kitchen that night laughing as he told the story to my mother. When I asked him what he said to the man, Dad just chuckled. “I didn’t need to say a word to him,” he replied. “He knew he took it, and he knew I knew he took it. He’ll have to figure out how to fix this.”

From his example, I began to realize early in my life, that if I had an angry thought about someone, but said nothing, I could change my mind and no harm was done. Eventually I realized that when I said nothing, I didn’t give energy to the negative words and my heart changed much more quickly. Finally, later in my life, it occurred to me that by not saying the angry or hurtful thoughts, they didn’t come as much anymore. Matthew 7:1-5 teaches us clearly we are not to judge one another. To this day, on occasions when judgmental thoughts cross my mind, I can still hear him encouraging me on, “Say nothing about this to others, Chris. You might not know the whole story.”

Dad loved to learn, and although he never went to college, he was one of the most educated people I ever knew.  He used to tell us that everything he knew he learned from the school of hard knocks, but that wasn’t the case. He was knowledgeable because he was always reading.

When I was in grade school, my parents bought a set of encyclopedias. My siblings and I all have memories of Dad sitting down with a volume after dinner, opening to any topic and reading for hours. If we were walking by and he thought this was a topic we should know about, we were cornered for fifteen to twenty minutes.

A few years after our home in upstate New York burned, my parents moved to California and, at an age when most men would retire, he went back to school and received a degree in massage therapy.

After my father died, a number of people told us stories of kindnesses that Dad had done for them or others. We had never heard those stories before, but were not surprised. Dad never spoke of such things and he counseled us to do the same. It was a simple lesson, reminiscent of Mathew 6:4, but I never forgot it:

“If you do good for others and talk about it, it doesn’t count.”

Chris Hall maintains she is one of the most unlikely authors you will ever meet, as it was never in any of her life plans to write a book.  Her writing experience began without forethought or intention on her part.

Her first book, Conversations with a Moonflower, was published in March 2011.

Chris is never happier than when she and her husband are surrounded by their eight children and spouses and their 32 grandchildren. She lives in Utah with her husband, Duane.

See more from her at christinethall.com.