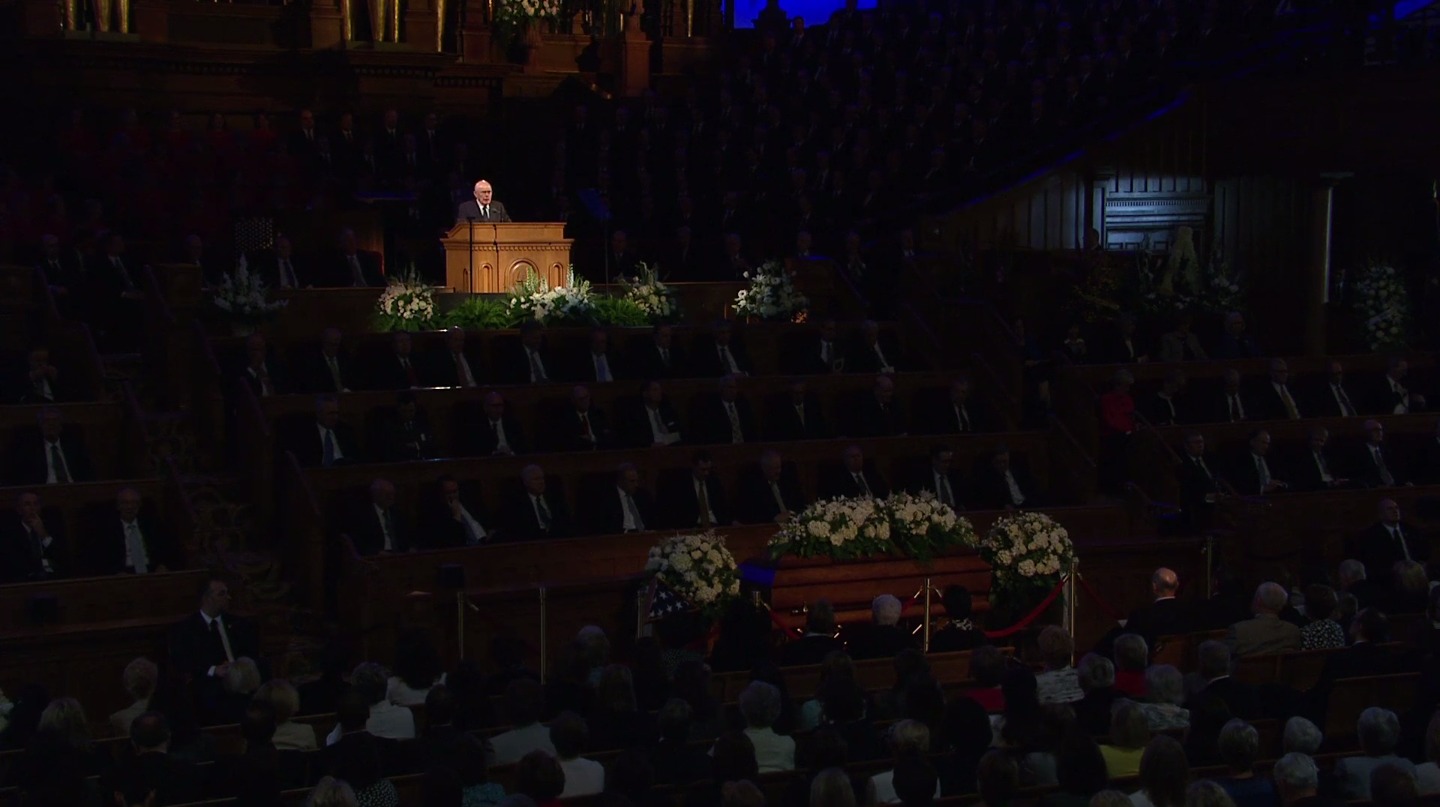 5 Heartwarming Stories About Elder Perry Shared at His Memorial

Photo from live stream of service.

Today's public funeral for Elder L. Tom Perry didn't leave a dry eye in the tabernacle. Here are five remembrances from the service that evoke the humor and warm spirit of Elder Perry.

Knocked Right Off the Bench

Elder Perry's son, Lee T. Perry, recounted the follow story about his father's calling to be an assistant to the Twelve:

“When I think of the tabernacle, my first thought is of the Mormon Tabernacle Choir. . . . My second thought about the tabernacle is of the time my father was called to be an assistant to the Twelve at the October 1972 general conference.

"My father, mother, and sister Linda had booked a hotel room in Provo to be closer to me during their visit. While we thought we left Provo early enough, we soon realized, we had underestimated the amount of traffic on I-15 headed to the Solemn Assembly.

"By the time we arrived at Temple Square, the Tabernacle was already filled, and so three of us went to the overflow in the old Salt Palace. My father, knowing he needed to be inside, waited in line for thirty minutes, but the line didn’t move.

"Finally, he approached an usher and pleaded for help. The kind usher found him half a seat at the end of one of the benches. When my father was sustained, the man next to him turned to congratulate him, knocking him off the bench.”

Slowing Down the Craft

In closing his remarks, Brother Lee T. Perry shared the following story about his father:

“I’ve often heard Elder Ballard say that Elder Perry still thinks he’s a marine. Elder Perry loved his country and he was honored to serve it during and immediately following World War II. I would like to close by telling a brief story about an experience Elder Perry had in May 1991.

"He had been invited by Marine Corps General Gary E. Brown to spend the long weekend at Camp Pendleton near San Diego California. After many memorable experiences, Elder Perry was taken out to sea in an amphibious assault ship and he was given the controls to an amphibious landing craft launched from the ship. He was having a glorious time steering the landing craft until he approached the landing area. He realized he had not received instructions about how to slow down the landing craft.

"Elder Perry received the help he needed, but still, the landing craft hit the beach a little hot and he narrowly missed knocking down a fence.

"Elder Perry’s uncommon life was much like his experience steering the landing craft towards shore. Every day of his life was glorious to him. He embraced a life that was always full speed ahead. He immersed himself so completely in everything he did that he forgot until very late in life that it was necessary to slow down, and so the end came much sooner than expected. Still, he lived his life to its fullest, a life of devotion to God, family, and country.”

Photo from live stream of service.

"For 40 years, I’ve had the privilege of knowing my dear friend Elder L. Tom Perry. From the first meeting in the spring of 1975 at mission president’s seminar in New York City. . . .

“Fortunately for me, I found myself walking side by side with him in Central Park as we talked about my business background and his. We learned we had much in common as we walked along. He then shared with me his great affection and love for his family and the significant change he was experiencing in his life since his wife Virginia had passed away just recently. I felt his sensitive, gentle spirit as he talked to me about his love for his wife and his children. I knew then that L. Tom Perry would be a powerful apostle and he would be admired and respected as he served the Lord Jesus Christ.”

At Least One Day Before

Another beautiful story of Elder Perry's life was shared by Elder Dallin H. Oaks, who said:

“President Boyd K. Packer visited personally with Elder Perry the day before his death. They shared their love for one another and their expectation that their friendship will continue into the next life when they will have new assignments.

"One who was present reported Elder Perry’s repeating something all of his Quorum members have heard him say many times that it has always been his desire to pass through the veil of death at least one day before President Packer. In this final visit he declared that he was, ‘completely at peace now as he faced that very circumstance.’”

As President Monson spoke of his "beloved friend and colleague," he included this person anecdote:

“When he was called as an assistant to the Twelve nearly 43 years ago, I told him how pleased I was that there was another ‘Tom’ among the general authorities.

"Over the years, he and I served on many committees and in countless assignments together. He was one who responded willingly to any assignment and in whom we all had complete confidence."

You can watch the full service here.