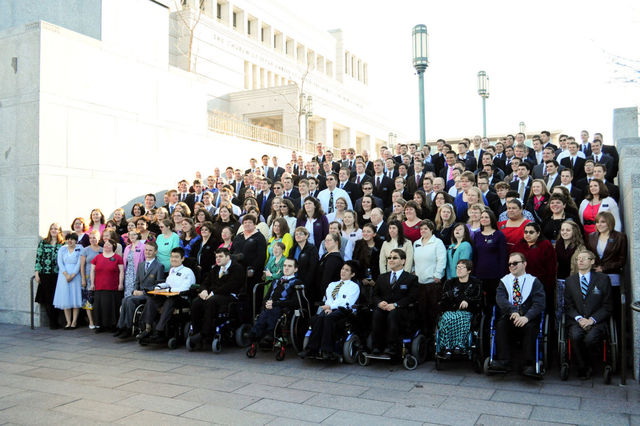 “I have autism but I am not ashamed of it; it doesn’t limit what I can do and it doesn’t stop me. The only problem with it is that it keeps me going on a day-to-day basis,”  Connor Susov says. “I am thankful to my Heavenly Father that I have autism 'cause if I didn’t I wouldn’t be here today, meaning I wouldn’t be on this mission and I wouldn’t be who I am.”

He was called the “singing missionary” -- the elder who sang his heart out around Temple Square in Salt Lake City.

Connor Susov, age 26 of Pleasant Grove, was also the self-designated cheerleader of the Mormon Tabernacle Choir and Orchestra at Temple Square. A full-time Young Church-service Missionary, he also has autism.

Susov and others like him who want to serve in their organized faith have one goal: to hasten the work of the Lord. The Church of Jesus Christ of Latter-day Saints provides a way to make that happen through the Young Church-service Mission. Many youth with autism, and other disabilities, are having enriching and life-altering experiences as they serve in numerous capacities.

Every Sunday for two years, Susov and his companion could be found on the very front row of the Salt Lake Tabernacle enjoying another "Music and the Spoken Word" broadcast. At the end of each broadcast, Susov would be the first to pop up and start the crowd clapping and encouraging a standing ovation.

“It became my favorite spot,” Susov said. “I would be the first one up and applauding. The choir members took notice.”

The last day of Susov’s last mission, the choir and orchestra returned the favor and gave him a farewell ovation. He also received a card with their signatures and a couple of their albums. They nicknamed him “Favorite Elder.”

Susov is a unique servant of the Lord. He was diagnosed with high-functioning autism, attention-deficit/hyperactivity disorder (ADHD) and obsessive-compulsive disorder (OCD) when he was in kindergarten.

Lead image from the Daily Herald.