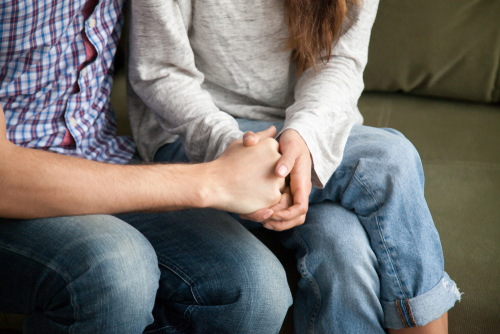 5 Lessons from Losing Our Baby

We were thrilled when the test came back positive.

Our first little girl was only 8 months old and I was so excited that before she ever remembered being an only child she would become a big sister.

We called the doctor and they set an appointment for 10 weeks into the pregnancy.

That Tuesday snuck up on us, and I almost forgot about the appointment.

My wife, Annie, had such a relatively “easy” (her word not mine) time with the first pregnancy, that I didn’t give it much of a thought. Annie even told me not to even come to this appointment because it wasn’t a big deal.

I was on a call with my business partner from my home office when I remembered the appointment had started an hour earlier. I said I would call him back in a couple minutes because I needed to check how my wife and new little baby were doing. It ended up being three hours.

Annie had left her phone at home, as usual, but just at that moment, she pulled into the driveway.

I threw open the door to greet her.

My brain stopped. My heart dropped.

She came in and we hugged and cried and kissed our 8-month-old girl. We looked at the sonogram of our lifeless peanut-sized child and cried a little more.

A couple of hours later, my wife left on an errand, and I tried to go back to work. Instead, I ended up opening my cupboard, taking out five different types of junk food, and eating. I felt so, I don’t know. Sad? Numb? Hungry?

Despite not having fully processed my feelings of having lost someone that I never met, I had meetings on the other side of town that I had to drive to. But I was still so distracted by the news that I crashed the car.

While I didn’t feel betrayed, I felt confused. I mean, we had prayed for the health of the baby almost every prayer and my patriarchal blessing promised us with children. I knew it wasn’t the end of having kids, but it still felt hard.

That night we turned to prayer and to President Russell M. Nelson’s rarely quoted titled “Reverence for Life.” In it, he states, “The onset of life is not a debatable issue, but a fact of science. Approximately twenty-two days after the two cells have united, a little heart begins to beat. At twenty-six days the circulation of blood begins. Scripture declares that the ‘life of the flesh is in the blood’ (Leviticus 17:11)” (“Reverence for Life,” general conference, April 1985). Despite all the questions we still had after reading this talk, it felt comforting to know that that never-to-be-born child was a life.

To anyone who has experienced a loss of this kind, it is a challenging, soul-searching, learning time. And for me, there were a few things that I learned that might help others who are going through or who are supporting those in a similar situation.

During pregnancy, I always tried to say, “Annie is pregnant,” because, you know, she was carrying the baby. It wasn’t my bladder getting squeezed to a grape, and I felt my wife deserved that acknowledgment. But with losing a baby, it is different. It is a shared loss, a shared pain, and a shared burden. We both lost something, and ascribing it to only one of us can feel like blame is being placed on that person and will only make a painful moment more bitter.

2. Knowing statistics is not comforting.

I was so grateful that no one tried to console us with data after we initially found out we lost our baby.

► Related Content: Miscarriage: How to Heal and How to Help

When you are hurting from that loss, knowing that a significant number of pregnancies end in miscarriage doesn’t make you feel any better; acknowledgment that it hurts to lose a child at any stage does. Downplaying trauma with data is like saying “100% of people lose their parents, so not that big of a deal.” It isn’t statistics that people need during these moments; it is a listening ear, empathy, and love.

3. Use all of the support systems around you.

While knowing that many people have gone through similar pain doesn’t lessen yours, it does mean that there are many who understand the general feelings you are having. Find a support group online. Tell your friends and family what you are feeling and then (this is going to be tough for a lot of us out there…) accept the love and support of everyone around you. There is power in prayer—let others use that power on your behalf. Ask for a priesthood blessing. Seek the support of your Father in Heaven. You can even talk to a counselor if needed. You don’t have to cope alone.

4. You won’t quite know how you feel, and that’s okay.

It is such an odd feeling to lose someone you never had, saw, touched, or held.

At times, I felt bad that I didn’t feel worse. Other times I felt stupid for feeling so devastated. Depending on what minute someone called or texted, I felt that they didn’t care enough or that they were making too big of a deal about it. I would get bugged when someone would bring it up but have an insatiable desire to talk about it.

Instead of trying to pinpoint the feeling, Annie and I decided to talk about what had happened, be open with our reactions and coping mechanisms, and accept the feelings for what they were, as they were—and as they still are. We realized that God gave us those emotions, and we didn’t have to mold them to fit how we thought we should react or feel.

Human nature looks for significance, meaning, purpose in everything. We erroneously think A void must be filled and understood, or it certainly will lead to catastrophe!

But instead of trying to figure out the reason for our baby not living long enough for us to hold it and love it, I have found solace in acceptance.

I don’t know if I’ll see my baby in the next life. I don’t know why the baby died and I don’t know what or if that death means anything. But I do know that we have one healthy little girl, and with God’s help and guidance, we will keep growing our family.

► Related Content: What We Know About the Lives and Spirits of Unborn Children

I’ve always tried to manage every bad situation in life by the mantra that if a problem can be fixed with time or money, it isn’t that big of a deal, and if it can’t, then there probably isn’t much you can do about it anyway, so don’t worry.

In this case, I believe time will heal our hearts.

And instead of trying to look at the one thing this situation took away, I am also trying to find what it is giving me: more gratitude for life, a closer relationship with my wife, deeper empathy for those who have suffered loss, and—most importantly to me—a broader perspective of the gospel plan to help me with whatever else will come.

Makes You Think Loss Faith Children FamilyLoss,Faith,Children,Family,Makes You Think
Comments and feedback can be sent to feedback@ldsliving.com