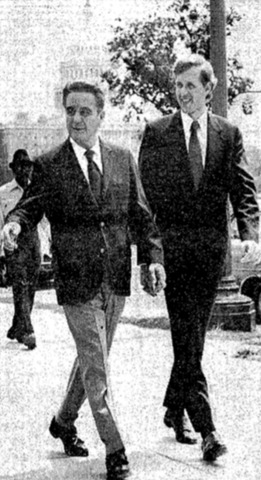 During his final year at law school at Duke University, David Todd Christofferson applied for a prestigious clerkship with Judge John J. Sirica. Despite there being over 200 other applicants, Sirica was impressed by the young Latter-day Saint family man, selecting him for the position.

Little did Christofferson know that his new position would plunge him into the depths of one of the biggest political scandals in American history.

Just two weeks after Christofferson started his post as Sirica's law clerk, the men involved in both break-ins at the Watergate Hotel—the site of Democratic National Party Headquarters—were indicted in Sirica’s court on charges of burglary.

But trials for these men didn't begin until January 1973. Christofferson was with Sirica that March when the first man involved in the scandal finally broke the silence, handing over a letter that changed the scope and implications of the trial.

Later that July, when it was discovered that the White House had a voice-activated recording system and Nixon resisted the court's subpoena for the tapes by citing executive privilege, Sirica finally ruled Nixon must turn over the tapes to the court and asked Christofferson to write up an opinion.

After Nixon appealed the decision to the Supreme Court and lost, he finally turned over the tapes in July 1974.

In December, Sirica finally began reviewing the infamous Nixon tapes accompanied by his law clerk, David Todd Christofferson. Unlike many judges, Sirica trusted Christofferson with a great deal of responsibility, allowing him to talk to politicians and answer questions from the media.

During that hectic time, Sirica told the press that Christofferson was the "only one I could talk to" (“Law Clerk to Watergate Judge Says He Was in Right Place at Right Time”).

In 2015, Elder Christofferson published "Some Lessons from Watergate" that describe the important and even spiritual lessons he learned during this tumultuous time: