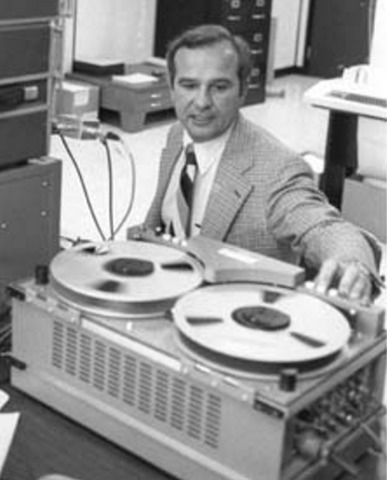 An Emmy, Grammy, and Oscar Award winner, Thomas Stockham earned an Sc.D. from MIT. Because of his pioneering efforts in digital sound, later in life he became known as the "father of digital recording."

As a result of his prestige in the recording world, Stockham became one of six experts appointed by Judge Sirica to try and determine what could have caused the erasure of 18 and a half minutes of the Nixon tapes. President Nixon's personal secretary, Rose Mary Wood, claimed the erasure was a mistake.

Dr. Stockham, along with other experts, determined that the gap was a result of five individual erasures and rerecordings—something that could not have merely happened by accident.

After Nixon's resignation on August 8, 1974, the prosecutors on the case decided the public had Watergate fatigue and did not pursue the issue, leaving the mystery of the missing material in the tapes unsolved.