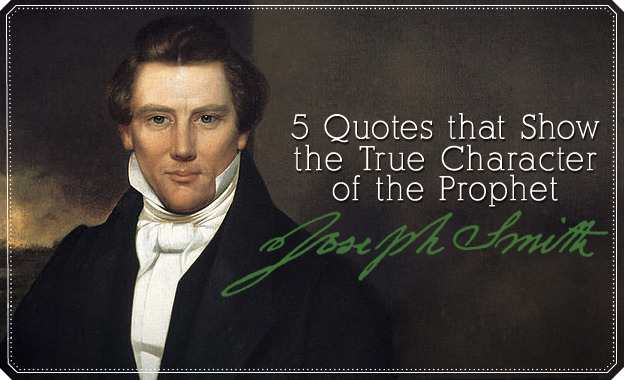 5 Quotes That Show the True Character of the Prophet Joseph

Latter-day Saints often learn that Joseph Smith was generous and charismatic, but there is no better way to learn about his attributes than to study his own words. Here are five quotations from Joseph's own writings that reveal more about his character:

1. “I was grieved to hear that Hiram [Hyrum Smith] had lost his little Child I think we Can in Some degree simpathise with him but we all must be reconciled to our lots and Say the will of the Lord be done.”

By 1832, Joseph and Emma Hale Smith had three children born to them. All three died, either soon after birth or in infancy. In addition, Joseph Murdock, one of the twins Joseph and Emma adopted, had died just a couple of months earlier at the age of 11 months. No wonder Joseph said that he could sympathize with his brother Hyrum and sister-in-law Jerusha, who lost their nearly three-year-old daughter, Mary, in May 1832.

These experiences gave Joseph an increased empathy and the ability to mourn with those than mourn.

2. “I know that Zion, in the own due time of the Lord will be redeemed, but how many will be the days of her purification, tribulation and afflictions, the Lord has kept hid from my eyes; and when I enquire concerning this subject the voice of the Lord is, Be still, and know that I am God!”

As church members, we sometimes struggle when we don’t get an answer to our prayers, thinking that perhaps it is because of a lack of faith or that God has forgotten us. This passage, written in a letter to Edward Partridge after Joseph had heard about the Saints’ expulsion from Jackson County, Missouri, shows that even the Prophet did not always receive immediate answers from the Lord. Just six days after Joseph wrote this letter, however, he received what is now section 101 of the Doctrine and Covenants, which provided answers to his questions. That section also reiterates what Joseph said the Lord had been telling him: “Be still, and know that I am God.”

3. “Zion shall yet live though she seemeth to be dead.”

In December 1838, Joseph and the Church were suffering through some of their darkest days. Joseph was imprisoned in Liberty Jail, Missouri, on charges of treason against the state of Missouri, and his followers had been driven from the state after an extermination order was issued by Governor Lilburn Boggs. Rather than giving into pessimism about the future of the Church during this time the Saints had been expelled from their homes and the place Zion was supposed to be built, Joseph told the Saints to take heart. Zion would yet rise in its glory.

4. “And as to yourself if you want to know how much I want to see you, examine your feelings, how much you want to see me, and judge for yourself, I would gladly walk from here to you barefoot, and bareheaded, and half naked, to see you and think it great pleasure, and never count it toil.”

While still in Liberty Jail, Joseph wrote this poignant letter to his wife Emma, expressing his love for her and for their children. His expression of love stands as an indication of the deep affection he felt for them.

5. “Mormons can testify whether I am willing to lay down my life for a Mormon; If it has been demonstrated that I have been willing to die for a Mormon I am bold to declare before heaven that I am just as ready to die for a Presbyterian, a baptist or any other denomination.”

Sometimes we forget how important the concept of religious liberty was to Joseph Smith. Not only did he pen the 11th article of faith, proclaiming the right of all humans to worship as they wished, he also counseled the Saints to exhibit that same religious tolerance. As he told church members at this Nauvoo meeting, he was just as willing to give his life for a member of another faith as he was for the Saints in the church.

These experiences highlight Joseph’s selflessness, charity, and acceptance towards all God’s children.

All quotations are reproduced in their original format, including typographical and spelling errors.

Learn more about Joseph Smith in his own words in The Joseph Smith Papers. The latest volume, Documents Volume 3: February 1833-March 1834 is available now: 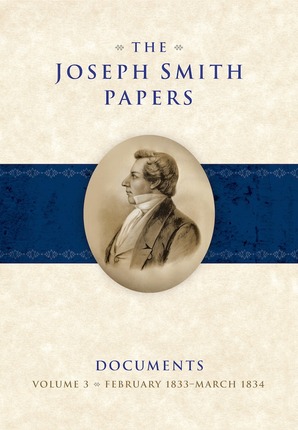 Become more personally acquainted with the Prophet Joseph Smith and early Church history through the engrossing volumes of the Documents series. Each volume contains reproductions of 75 to 100 revelations, letters, and other papers presented in chronological order. Historical introductions to each document explain where, when, and why it was created. From revelations to sermons to newspaper editorials to personal correspondence, the documents of this series allow you to see through the eyes of Joseph as early Church history unfolded.

A primary focus of the time period covered in Volume 3 is the effort to build temples and develop Zion in Missouri. Volume 3 also documents the challenges Joseph Smith faced as the population of the Church grew in both Ohio and Missouri and as the violent persecution of the Saints in Jackson County intensified. As with the first two volumes, this volume includes many revelations, including the Word of Wisdom (D&C 89), that were later published in the Doctrine and Covenants, making it a valuable companion to studying that standard work.