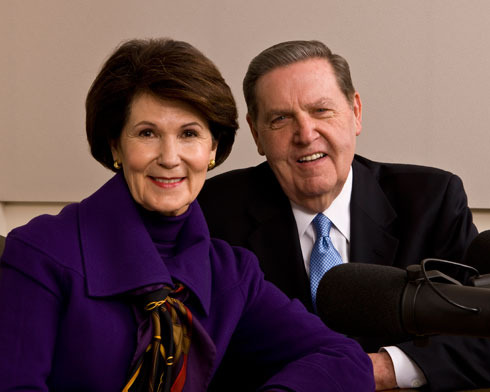 “I’d listen to [Elder Holland] read the ingredients off a cereal box.”  This comment—made on one of Elder Holland’s Facebook posts about general conference—sums up how most members of the Church feel when they see Elder Holland approach the pulpit.  Ears perk up, eyes strain to see his animated expressions, and thoughts are arrested by the eloquence, the magnetism, and the power that is Elder Jeffrey Roy Holland.

But, what is it about this man that makes his counsel so riveting and impactful?  How can he manage to speak so intimately, so personally, and so sincerely to every Latter-day Saint when his audience consists of thousands, if not millions?  How does he manage to answer prayers, bolster broken hearts, and lift so many to the Lord’s endless reserve of love with only a few words?

Elder Holland tells it how it is, without any sugar-coating.  And that’s one of the things we can’t help but love about him—even if his calls to repentance might, at times, make us squirm.  A man of intense passion with an infinite capacity for compassion, Elder Holland always balances comfort and hope with an open frankness.  He fearlessly addresses modern problems in words that defy misinterpretation, passionately attacking sin even while uplifting and enlightening the sinner.  He speaks with such emotional intensity—with tears, righteous anger, and laughter all in one talk—that listeners can’t help but feel his love for them intimately.

Strong, faithful, and spiritual, there is no doubt about it, Elder Holland is powered by a superhuman force.  Ordained to the Quorum of the Twelve Apostles on June 23, 1994, this marks Elder Holland’s twentieth year as an apostle and his twenty-fifth year as a general authority.  In that time, he has strengthened billions the world over with apostolic blessings and promises that stem from the divine power given to him as a special witness of the Savior.

His words can stand alone against anything—any topic, any temptation, any struggle—and each phrase speaks volumes.  With a bachelor’s in English and a master’s in religious education from BYU as well as a second master’s and a doctorate in philosophy from Yale, there’s little doubt that Elder Holland’s wisdom and eloquence are well earned.

Attuned to the Spirit

Dynamic, insightful, and spiritual, Elder Holland’s advice is always spot on.  I hear and read comments constantly after general conference expressing a sense of awe and wonderment at Elder Holland’s superhuman abilities.  “How did Elder Holland know exactly what I was going through?”  “That talk was a direct answer to my prayers.”  “He said exactly what I needed to hear.”  Acutely attuned to the Holy Ghost, Elder Holland is inspired by a spirit and force well beyond any man, helping him give the counsel that is needed exactly when it is needed.

Though many of us have never met Elder Holland, his writing and speaking style communicates an intimacy that makes us feel as though he was a dear friend well acquainted with our concerns and needs.  His stories are relatable; his feelings intensely real.  You just can’t help but feel he understands our struggles, from the mundane day to day annoyances to our darkest hours.  And yet, his counsel is always infused with that optimism and humor that keeps us hopeful of what lies ahead.

Thank you Elder Holland for your words and example.  We appreciate all you do for our Heavenly Father, for our Church, and for all of us individually.  We honor, support, and sustain you.

“If you need a burden lifted, I want you to imagine I am in a personal, private, closed-door chat with you. I want to help you if I can.” With those words, Elder Jeffrey R. Holland invites every reader of his latest book to become a friend, to receive instruction and encouragement, counsel and comfort and to remember our greatest friends of all, the Savior.

For more of Elder Holland's inspiring words, check out these highlights from his 2014  general conference address.

To read more of Elder Holland's uplifting words, check out these popular titles from Deseret Book.

Three Classics by Jeffrey R. Holland Bundle: Three of Elder Holland’s classic titles together in one eBook; However Long and Hard the Road, On Earth and it is in Heaven, and Broken Things to Mend.