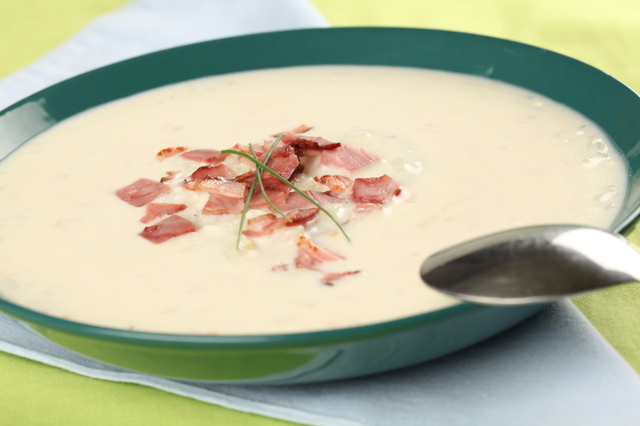 With the New Year comes the chance to celebrate National Soup Month in January! Though soup is especially popular in cold winter climates, this versatile meal option is enjoyed all over the world. Check out these fun facts you never knew about this popular food:

- Many people believe the first soup was eaten around 6,000 BC and was made of hippopotamus.

- Americans eat more than 10 billion bowls of soup each year.

- Proper soup etiquette says to tilt the bowl and spoon away from you, sipping, not slurping from the side of the spoon closest to you. Use the soup spoon, the one furthest away from the plate, and never lean over the bowl.

Enjoy a few of those 10 billion bowls with these delicious soup recipes from LDS Living:

This delicious and savory soup won our recipe contest in 2011—and with good reason. Something about this soup is just plain homey. And just plain delicious.
► Get the recipe

From Wyoming comes our soup contest's first runner up: an amazingly creamy potato soup recipe that will leave your family members asking for seconds (and thirds . . . and fourths)!
►Get the recipe

This spin on a fancy favorite from The Double Dipped Life tastes just like chicken cordon bleu—in liquid form! Ham, cheese, chicken, and potatoes. What's not to like?
► Get the recipe

This is yet another way to be a Zucchini Houdini by using up the harvest from those prolific zucchini plants. This creamy, Southwest soup would make the perfect ending to a chilly winter day.
► Get the recipe

This easy slow-cooker recipe comes from the wife of LaVell Edwards, BYU Football coach from 1972 to 2000. But even if you don't bleed blue, you'll love this stew!
► Get the recipe

This article originally ran on LDS Living in 2014