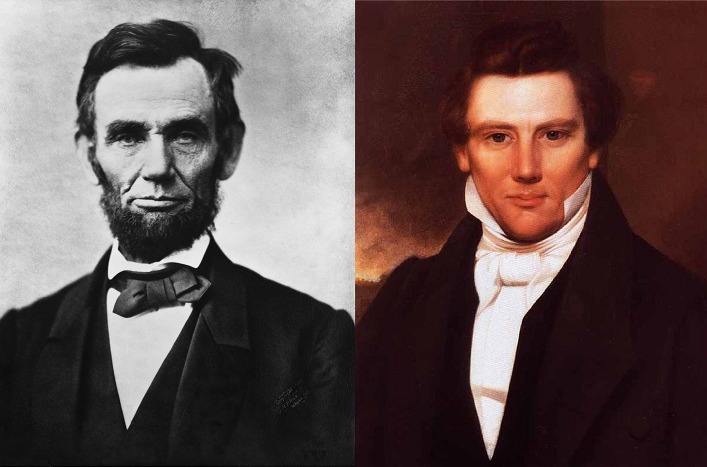 There are more similarities than you’d think between Abraham Lincoln and the Prophet Joseph. We stumbled upon these gems in Tim Ballard’s book The Lincoln Hypothesis. Here are five of our favorites:

1. Both prophesied the destruction of America if certain things didn’t change.

In the years of turmoil and argument that led up to the Civil War, many forget or don't realize that those were the same years that the Saints were being persecuted and driven from state to state. Both Lincoln and the prophet knew that such persecution and discrimination was not the behavior of a covenant nation—and that God was anything but pleased.

In his 30s, Lincoln prophesied, “Whenever the vicious portion of the population shall be permitted to gather in bands of hundreds and thousands, and burn churches, ravage and rob provision-stores, throw printing presses into rivers, shoot editors, and hang and burn obnoxious persons at pleasure, and with impunity; depend on it, . . . this Government cannot last.”

A few years later, standing not far from where Lincoln had spoken, Joseph Smith (also in his 30s) declared, “I prophesy in the name of the Lord God of Israel, unless the United States redress the wrongs committed upon the Saints in the state of Missouri and punish the crimes committed by her officers that in a few years the government will be utterly overthrown and wasted.”

2. Both were willing to die for the rights of their fellow countrymen.

In 1838, a young Abraham Lincoln declared the following before an audience at Springfield, Illinois: President-elect Lincoln declared that the bonds of “Christianity,” “patriotism,” and “liberty” and “equality” for all, as incorporated in the Declaration and the Constitution were worth fighting for. “I would rather be assassinated on this spot than to surrender it.”

The Prophet Joseph boldly declared, “The Saints can testify whether I am willing to lay down my life for my brethren. If it has been demonstrated that I have been willing to die for a ‘Mormon,’ I am bold to declare before Heaven that I am just as ready to die in defending the rights of a Presbyterian, a Baptist, or a good man of any other denomination; for the same principle which would trample upon the rights of the Latter-day Saints would trample upon the rights of the Roman Catholics, or of any other denomination who may be unpopular and too weak to defend themselves.”

3. Both prophesied their own assassinations—and were assassinated.

Both Lincoln and the Prophet Joseph were political figures when they were shot and killed. Joseph Smith was running for president as well as serving as the mayor of Nauvoo, and Abraham Lincoln was serving as president of the United States.

Abraham Lincoln had a premonition in a dream roughly two weeks before he was shot. In his own words, he described the vision:

There seemed to be a death-like stillness about me. Then I heard subdued sobs, as if a number of people were weeping. I thought I left my bed and wandered downstairs. There the silence was broken by the same pitiful sobbing, but the mourners were invisible. I went from room to room; no living person was in sight, but the same mournful sounds of distress met me as I passed along. I saw light in all the rooms; every object was familiar to me; but where were all the people who were grieving as if their hearts would break? . . . Determined to find the cause of a state of things so mysterious and so shocking, I kept on until I arrived at the East Room, which I entered. There I met with a sickening surprise. Before me was a catafalque, on which rested a corpse wrapped in funeral vestments. Around it were stationed soldiers who were acting as guards . . . 'Who is dead in the White House?' I demanded of one of the soldiers, 'The President,' was his answer; 'he was killed by an assassin.' Then came a loud burst of grief from the crowd, which woke me from my dream. I slept no more that night; and although it was only a dream, I have been strangely annoyed by it ever since. (Recollections of Abraham Lincoln 1847–1865 by Ward Hill Lamon, p. 116–117. Lincoln, University of Nebraska Press, 1999.)

On April 14, 1865, John Wilkes Booth snuck into the presidential box at Ford’s Theater and shot Lincoln in the head at point blank range. Lincoln’s prophecy had come true.

Five days before his death, Joseph wrote: "I told Stephen Markham that if I and Hyrum were ever taken again we should be massacred, or I was not a prophet of God" (History of the Church 6:546). On June 27, 1844, he and other Church leaders were being held in Carthage Jail when a mob stormed the room where they were. Shots were fired that killed Joseph and his brother Hyrum and fulfilled Joseph's prophecy.

4. Both were extremely compassionate.

Lincoln and the Prophet Joseph were each extremely compassionate and had the greatest love for their fellowman.

One story of Lincoln illustrates how much Christlike love he had for even the lowliest creatures:

While riding with a group of men through a prairie, Lincoln passed a hog deeply mired in thick mud. The men went on by without giving much notice. After moving on some distance, Lincoln stopped his horse. He told his companions that he could not stop thinking about the poor animal. He said he imagined it had said to itself, as the men passed by: “There now! My last hope is gone.” Lincoln returned, crawled through the mud, and saved the poor creature.

And Joseph certainly had the greatest compassion for every single Saint—and for every single one of his fellowmen. After being violently tarred and feathered in the middle of the night, the very next day he preached a sermon to a large crowd—among which were his attackers of the previous night. He shared his tremendous Christlike love by never speaking a single word of anger against them.

5. Both had an unshakable faith in God.

Lincoln and the Prophet were both men of great faith. They each relied on the Lord to guide people to a better life—secularly and spiritually. Speaking of our Heavenly Father, Lincoln once said,

I think He means that we shall do more than we have yet done in furtherance of His plans, and He will open the way for our doing it. I have felt His hand upon me in great trials and submitted to His guidance, and I trust that as He shall further open the way I will be ready to walk therein, relying on His help and trusting in His goodness and wisdom.

Joseph Smith always practiced what he preached—and he preached faith. His unwavering faith was exhibited in his dedication to do the Lord’s will, share the gospel, and bless the Saints. He said, “Great blessings await us at this time, and will soon be poured out upon us, if we are faithful in all things, for we are even entitled to greater spiritual blessings than they [the faithful at the time of Christ] were, because they had Christ in person with them, to instruct them in the great plan of salvation. His personal presence we have not, therefore we have need of greater faith.” (Teachings of the Prophet Joseph Smith, sel. Joseph Fielding Smith [1976], 90.)

To find out more about Lincoln, his interest in Mormons, and his faith in God, pick up The Lincoln Hypothesis at Deseret Book stores or deseretbook.com.