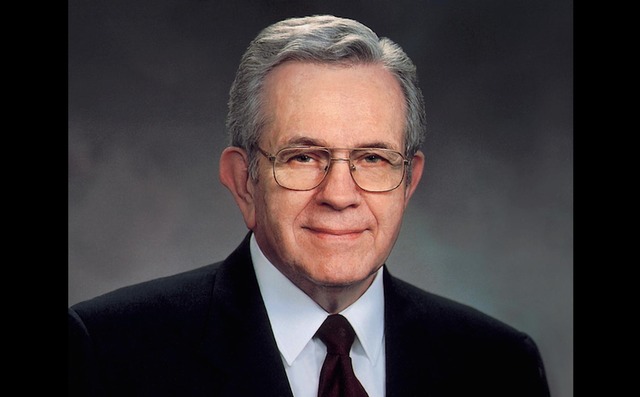 Though we are saddened to hear of President Boyd K. Packer’s death, we are grateful for the legacy of faith and family he has left behind. Here are five things we loved and will miss about President Packer.

Some of our best-known and most-beloved analogies used in the Church came from President Packer. We remember that he taught us that our minds are like a stage, explained the Atonement in the analogy of the Mediator, and compared mortality and the plan of salvation to a three-act play.

And, of course, one of his most powerful visual analogies is from his talk Spiritual Crocodiles:

2. His Love of Nature and Art

We will remember President Packer for his love of animals, particularly birds.

He raised many types of birds, from peacocks to pheasants to pigeons and began sketching and carving when he was very young. He taught us to grow closer to the Lord through nature and the importance of exercising our talents and gifts. We will always love his beautiful expression of his love for the creations of the Lord.

3. His Emphasis on Raising Children in Righteous Families

As a father of 10, President Packer loved his wife and his family and spoke often of guarding our children against the temptations of the world. He frequently reminded us of the vital importance of a stable home and family where children are raised in love and carefully nurtured and taught to choose the right. One of his most poignant stories about protecting children against pornography was made into a powerful Mormon Message.

4. His Love of Education

President Packer greatly valued education, especially gospel education. He had a doctorate of education degree from BYU and worked in the Church Educational System for many years, up until he was called as an Assistant to the Twelve. One of his life goals was to be an educator, which he did as a seminary teacher for many years and continued to do as an apostle up until his passing. One of his favorite teaching analogies was about a yoked set of oxen pulling perfectly together:

5. His Faith and Testimony

President Packer was an example of faith in every circumstance. Whether it was overcoming polio as a child or serving in the Air Force during WWII, President Packer reminded us to trust in the Lord and grow from our trials. He reminded us

In his final conference talk, he shared once again his powerful testimony of the Savior and the Atonement:

- Then-Elder Packer dedicated the Regina Saskatchewan Temple in 1999. It was the first 20th-century temple to be dedicated by an apostle who was not a member of the First Presidency. He also dedicated the temple in his hometown of Brigham City in 2012.

- President Packer was set apart as a member of the Quorum of the Twelve Apostles on April 9, 1970, and served faithfully in different capacities within the quorum for nearly 50 years.

- President Packer was one of three members of the Twelve originally assigned to help develop the “Genesis” group—a group designed to support members of the Church of African descent.

- President Packer had a great love for the temple and will be particularly remembered for his book, The Holy Temple.