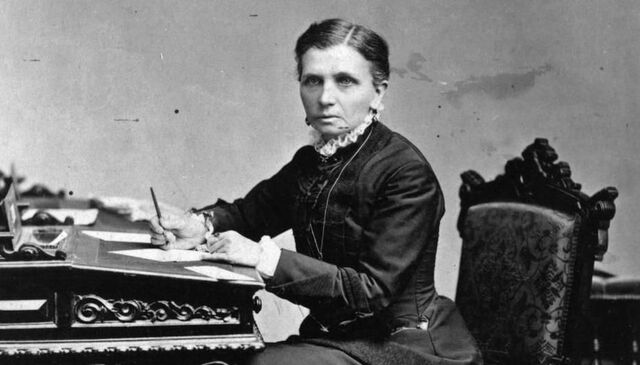 An informal survey from one of the Church historians found that almost no one could name five women from Church history. (Can you? I could, barely!) So, when Bethany and I wanted to do a book about Church history women, we had a lot of research to do. (Thank goodness for the learned and gracious church historians who were a fountain of knowledge— and good humor!) The exciting thing for me was not just learning their names but seeing all the astounding things these women accomplished.

1. While she was the General Relief Society President, Emmeline Wells was visited by US President Woodrow Wilson at her home in Salt Lake! She had worked with the Saints to save grain—200,000 bushels of it had been a great asset during World War I in order to help the country maintain its food security. And that’s not all! By age 22, she had been widowed twice, and then she proposed to her third husband. She financially supported herself and her five daughters for most of her life. She edited the Women’s Exponent for 40 years. And, she was told in a blessing, “You will live to do a work that has never been done by any woman since the Creation.’” Wow.

2. “Indignation Meetings” were held all over Utah—the first in the Tabernacle on Temple Square. Isn’t that a great title? No men were permitted to enter these meetings (except for newspaper reporters). The women planned for the event to be a publicity splash to raise awareness about their concerns. The fiery speeches calling for women to be able to practice their religion according to their conscience also demanding the right to vote. Eliza R. Snow, the General Relief Society President was one of the women who spoke at these meetings. Their intelligent and articulate speeches made the front page of the New York Times.

3. Lucy Mack Smith was elected to be the leader of a group of Saints moving from Fayette, New York to gather with the Saints in Kirtland, Ohio. Their group got stranded when the lake was iced over and no boats could move. Another group of Saints traveling told them to keep quiet about being Latter-day Saints or they would not be able to buy supplies. Her own people were grumbling when Lucy stood up and gave everyone the lecture of their lives. “Where is your faith?” she sternly demanded. She preached to her group and any passersby who came by to see what the ruckus was about. Lucy told her group if they believed, the ice would break—and it did! They were the only boat that was able to squeeze through the ice and continue on their journey.

4. Inez Knight and Jennie Brimhall were the first single sister missionaries. They had planned to go to Europe to visit Inez’s brother (who also happened to be Jennie’s finance—clearly mission rules have changed a bit!) when their bishop asked if they would like to take on a bigger challenge. In 1898, they were set apart as sister missionaries and headed to Europe. In a month, they visited the principal cities of France, Switzerland, Germany, Belgium, and Holland. They spoke at meetings and on the street, sang songs, and served. Knight said one of their primary purposes was to dispel images of Latter-day Saint women being “downtrodden slaves.”

5. Did you know that Ellis Shipp was sponsored by Brigham Young to go east to get medical training to become a doctor? She left her children behind and went first to Philadelphia, and later the University of Michigan. (As a side note, she gave birth to 10 children and only 6 survived infancy. She clearly personally understood the need for better medical facilities and skills.) One time, she took her last exam just mere days before she gave birth! Over the course of her career, she trained over 600 midwives and delivered over 5,000 babies.

Any of these fun facts pique your interest? Stories of these women and more can be found in the latest book in our series, Girls Who Choose God: Stories of Extraordinary Women from Church History. Read it with your children and be inspired together by these women’s brave choices!