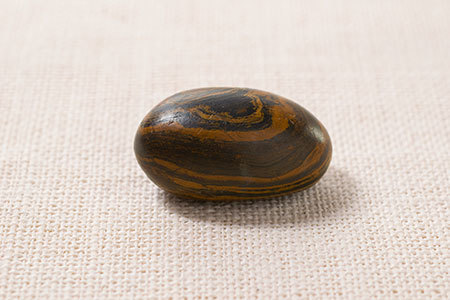 MR says: The internet has been buzzing with talk about a seer stone used by Joseph Smith ever since the Church released photographs of it yesterday. But how much do you really know about this priceless artifact?

Yesterday The Church of Jesus Christ of Latter-day Saints released photographs of a seer stone that was apparently one that the Prophet Joseph Smith used to aid him in translating the Book of Mormon. The stone has been in the Church Archives for many generations, but no known photographs have ever been taken of it or shown to the public.

The chocolate-colored oval-shaped stone was passed down from Oliver Cowdery’s widow, Elizabeth Ann Whitmer Cowdery, to Phineas Young who gave it to his brother Brigham Young. President Young’s wife, Zina D. H. Young, found this same stone in the estate of her late husband and gave it to the Church. It has remained in the archives ever since that time.

Here are five things to know about this seer stone.

Joseph Smith could see things in the present using the seer stone.

In an account given by David Whitmer and Oliver Cowdery, Joseph used the seer stone to see the journey of David Whitmer from Seneca Falls (or Fayette) to Harmony Pennsylvania (over 100 miles) where he came to pick up Joseph and Oliver by wagon. David reported: “I was a little over two and a half days going, and traveled over 40 miles the first day, and met them on the third day at the head of Cayuga Lake, Seneca Co. Oliver told me, they knew just when I started, where I put up at night and even the name on the sign board of the hotel where I stayed each night, for he had asked Joseph to look in the Seer stone, that he did so and told him all these particulars of my journey. Oliver asked me when I first met them, when I left home, where I stayed on the road, and the names of the persons at Hotels. I could not tell the names; but as we returned I pointed out the several houses where I had stopped, when he took out his book and found them to correspond even to the names on the sign boards, all of which he had written before we met. As had been told him by the Prophet, and which agreed in every particular.”[xi]

Martin Harris recorded a most interesting account of the use of the Seer stone: “I was at the house of his father in Manchester, two miles south of Palmyra village, and was picking my teeth with a pin while sitting on the bars. The pin caught in my teeth, and dropped from my fingers into shavings and straw. I jumped from the bars and looked for it…I then took Joseph on surprise, and said to him—I said, ‘Take your stone.’ I had never seen it, and did not know that he had it with him. He had it in his pocket. He took it and placed it in his hat—the old white hat—and placed his face in his hat. I watched him closely to see that he did not look [to] one side; he reached out his hand beyond me on the right, and moved a little stick, and there I saw the pin, which he picked up and gave to me.[xii]